The world's worst humanitarian crisis may be a great physical distance from Buffalo, but the potential famine on the other side of the globe was on the minds of activists downtown Thanksgiving morning.

Standing about 150 yards from the Turkey Trot finish line, about a half-dozen people handed out small bags of rice along with leaflets with information about the situation in Yemen, where the United Nations says 14 million people may soon be on the brink of starvation.

"If this was happening in any of our communities, we would be outraged; we would be saddened," said Jim Anderson, a Vietnam veteran and past president of the Western New York Peace Center, as he stood in the middle of Franklin Street.

The international aid group Save the Children estimates 85,000 Yemeni children under the age of 5 may have died of hunger and disease since civil war broke out in that country in 2015, according to the Associated Press.

The United States has armed and supported a Saudi-led coalition, which has worked with Yemeni allies against the Houthi rebels and taken both military and economic action, including periodic blockades, stringent restrictions on imports and withholding the salaries of nearly a million civil servants in the country, according to the New York Times. Thousands of civilians have been killed in coalition airstrikes.

Half of Yemen's population faces an imminent threat of famine, the U.N. has said. 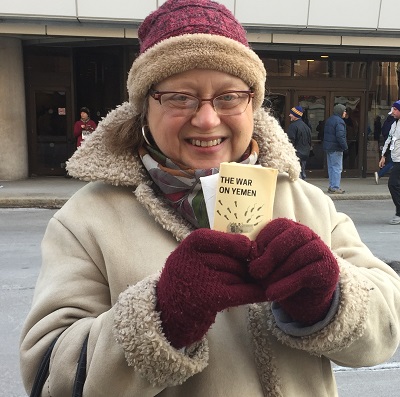 People in Yemen are starving every day, said Victoria Ross, executive director of the WNY Peace Center, who is encouraging people to call the office of Sen. Charles E. Schumer, D-N.Y. Ross said her organization wants Congress to act and stop American involvement in what's happening in Yemen.

"We're one humanity," she said. "And what's happening in Yemen has to be stopped."

In general, people in the United States are mostly unaware of the U.S. government's involvement in Yemen, said Marie Schuster, co-chairwoman of the Peace Center's Resist Militarism Task Force. The group stood in the cold Thursday morning with the aim of starting conversations and to "plant a bug in the ear" of people about the issues in Yemen, Schuster said. The action was also coordinated by Veterans for Peace, Chapter 128.

Anderson, the Vietnam vet, is also president of Peace Action New York State, a statewide nonprofit with 12 chapters. He served as a machine gunner in the Marines in Vietnam in 1968 and 1969.

Anderson said he wants people to remember the plight of the people suffering in Yemen and to realize the role the United States has played and continues to play.

"The children of Yemen, the starvation, those already dead," he said. "My God."