Like the age old saying goes, never assume. I did exactly that when it came to taking my daughter hunting when she turned of age. Natalie was always game for just about any outdoor experience (fishing, hiking, boating, canoeing, etc.), but I never asked if she would want to give hunting a try. I didn’t want to push her into anything.

I should have known better. She took the hunter safety training class while attending the Department of Environmental Conservation's Summer Conservation Camp at Rushford several years ago so there had to be some interest. However, sometimes we just don’t give our kids enough credit. At least I didn’t, and I am sorry for that.

Hunting is all about passing on traditions and sharing outdoor experiences with family and friends. After my nephew, Kiel Davignon of North Tonawanda, came out hunting for the first time last year, I asked my daughter if she would want to do something similar. I still can remember her response:

“I’ve never tried it before, so I would like to at least experience it firsthand,” she said. “I think I would enjoy finding out more about it and spend time with you and the rest of the family. I enjoy being out in nature anyway.”

Let this be a lesson to all of you fathers out there who have daughters who you’ve been hesitant to ask. Take that leap. You just might end up on solid ground, building a foundation for the future.

After sighting a Model 18 Remington 20-gauge that my grandfather gave me when I was of legal hunting age, Natalie felt comfortable enough to jump into the foray with both feet (in warm boots, of course). Plans were made for her to join us for opening weekend at Greenwood in Steuben County, a tradition started nearly 60 years ago by the elder statesman of the group, William R. Hilts. Where has the time gone? He will be turning 87 years old in one month and he was along on this trip, too.

But nothing ever seems to work out the way you hope.

It started with our arrival at the Rock Creek State Forest. We thought it was a bad sign when the Town of Canisteo plow truck was stuck in the seasonal road (more of a truck or logging trail) and unable to move in mud and a foot and a half of snow. Brothers Rick and Dave Hilts, as well as nephew Christian Hilts (also hunting the regular season for the first time) assisted in getting the truck out. It was the end of the line as far as plowing as we hit the Town of Greenwood. No one but me wanted to chance making it to the end of the road, thinking it would be an omen of some kind. 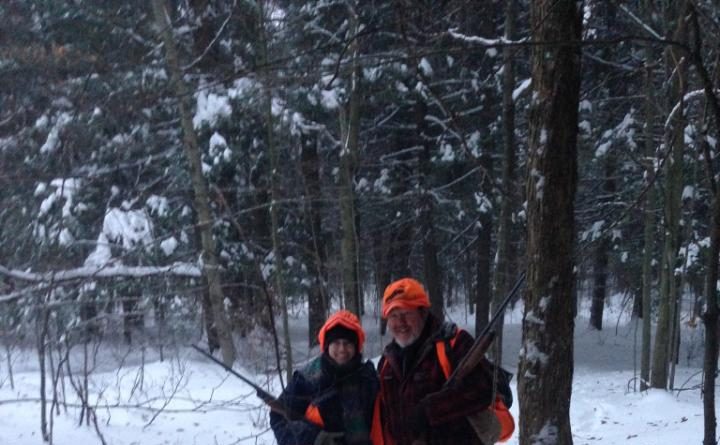 Natalie Hilts and Bill Hilts Jr. share a moment walking back in for lunch after trudging around in a foot and a half of snow.

We looked for alternatives, backups to hunt in the immediate area. We checked out several spots, but the final determination was that not one of the other areas were plowed and would give us safe access. We had to devise a plan that would get us into the woods. The only thing we could do was to clean out my vehicle and haul up two truckloads of hunters with gear, also including 79-year-old Ken Davignon of North Tonawanda, Kiel and his friend Eric Domin of North Tonawanda.

On opening morning, after a generous breakfast at JC’s Café in Hornell (another tradition of sorts), we loaded up two other vehicles and headed to the dirt road. The first trip included a popup tarp, tables, cooler, camp stove and as much other hunting gear as we could carry with five people. Everything was unloaded at our designated site in the middle of the woods. While I headed back down to grab the rest of the crew, the people I dropped off would be busy shoveling with a small emergency shovel, creating a parking spot and a place for the popup canopy.

Upon my return after the second pickup at the main road, everything was ready, and I was able to pull into a carved spot without incident. Guns were handed out and everyone sounded off as to where they were hunting. Of course, brother Rick, in the haste of throwing everything together, left his gun back in the room. Fortunately, I had an extra gun along … just in case. We also left Bill Sr. back in Hornell for the morning. Due to a hole in his pants pocket (another tradition from what I remember), his inhaler was lost, and he was unable to breathe clearly. It was better to not take any chances.

Hunter pressure was light. Any hunters who did make it into the area didn’t travel very far because of the difficulty in walking. As a result, the deer weren’t pushed. There were plenty of deer around us, it was just a question of getting them to move. That never did happen. After a hot cup of Lockport VFW chowder and a sandwich, we went back out seeking big game. Any hunters who were there in the morning were now gone. We were on our own.

When it was sunset, the process needed to work in reverse. The only saving grace was we were leaving most of the gear, including the 12-foot by 12-foot canopy. With only a two-track trail going in the last mile and a quarter, we could only hope we didn’t encounter any other vehicles coming at us.

When we compared notes over dinner, several people in the group saw deer during the day. Of course, those were the same hunters who didn’t have a Deer Management Permit for the area. We were going to give it another try Sunday.

The following day was a repeat performance of the first – hauling people in and out and seeing a few deer but unable to get a shot off. The highlight of the day was a hot bowl of venison chili, followed closely by the numerous stories of past hunts and previous experiences through the years on this very hill in Greenwood.

As Natalie and I hunkered down under the branches of an old hemlock trying to keep out of the falling snow during the morning hunt, I told her the story of the shotgun that was in her hands and how my grandfather had given it to me 50 years ago. It was the same gun that I used to shoot my first deer, a 6-point buck on this same hill not very far from where we sat. It was now hers, the passing of another tradition and one I pray that I will be able to share with her for many more years to come. I wish time would slow down.

Yes, it would have been nice to put some venison in the freezer, but all in all it was another very successful hunt in Steuben County for opening weekend. We wouldn’t have it any other way.