Work is now underway on a project to convert a longtime industrial manufacturing property on Buffalo's East Side into a new residential community with several hundred tenants.

The Forge on Broadway mixed-use and mixed-income development will include 158 affordable apartments in the two-building main complex, which includes a four-story building fronting on Broadway and an "F"-shaped portion behind it along Mortimer Street with three floors of apartments.

It's aimed at those who work at the Buffalo Niagara Medical Campus, building on the development that's already occurred in recent years with the new Oishei Children's Hospital, University at Buffalo's Jacobs School of Medicine and Biomedical Sciences, Conventus and the Gates Vascular Institute.

"If you take the corridor and the type of housing we’re creating, the users of our housing will be the workers of the medical corridor," said Stuart Alexander, founder of the company that bears his name.

"We are against upscale development displacing residents or not providing for housing for the people who work in the facilities and services that have created the demand for upscale housing," he added. "That’s not right, so we’re providing housing for those people."

The Broadway building would have 30 units and would also include 9,800 square feet of ground-floor retail space, while the larger facility would have the remaining 128 apartments.

Further back on the same six-acre property, along Mortimer and Sycamore streets, the project includes 25 for-sale townhomes in four clusters. Each unit will have a garage and room for a car outside. 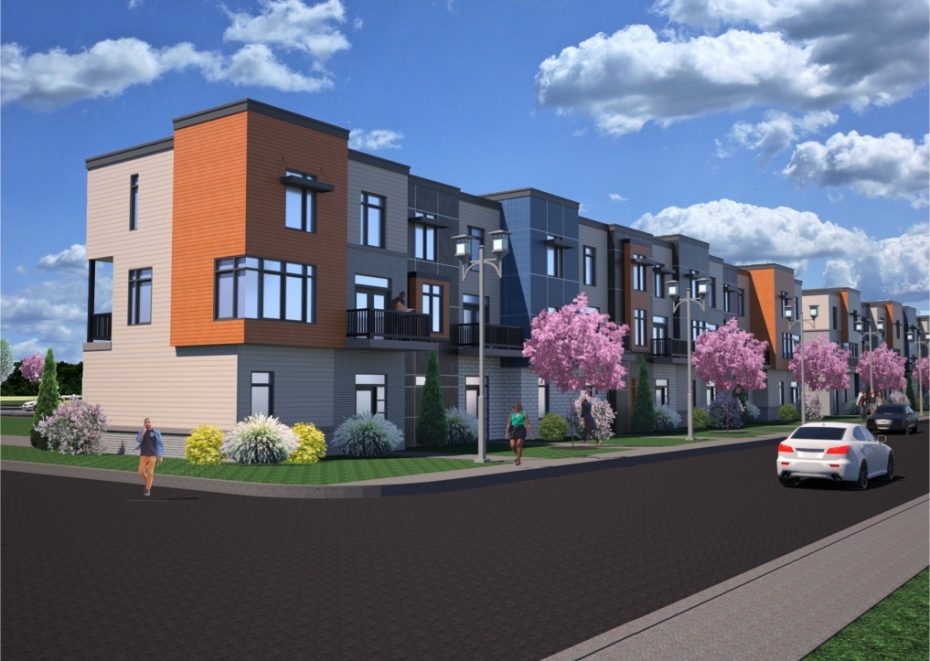 A rendering of the Forge on Broadway townhomes.

The project includes a green roof with two exercise areas and two playgrounds. Three more exercise areas, a jogging path, a landscaped berm along Spring Street and other greenery are also included. The plan also has a total of 255 parking spaces in three areas.

On the other side of Mortimer, there's another five acres that is destined for a subsequent phase of development. Alexander said the developers are talking with potential commercial users for that second chunk of land, toward Jefferson Avenue.

One option would be a grocery store or supermarket, perhaps with more residential apartments above that. Five single-family detached homes are also under consideration. There's also two vacant lots on Spring Street. In all, Alexander said, the site could have at least 400 people living there when it's completed.

"This is a big hit for Broadway, given the fact that they’ve had to live with that vacant piece of property for 15 years," Alexander said.

The project represents somewhat of a capstone for Alexander, a former urban planner who came to Buffalo in 1968 and worked for the Buffalo Area Chamber of Commerce as a liaison between business and government before he became the city's planning director. He's spent the past 30 years as a developer, particularly focused on affordable housing, and currently owns more than 500 units in the city.

"It’s kind of a sayonara project for me, for Buffalo," he said. "I’m in my late 70s, and my son is carrying on the company. I’m not sure I’m going to be doing more projects in Buffalo. For me, I’m going to wind down, but it’s a big deal to wind down with."

Workers will start with the remediation of the 11-acre property under the state's Brownfield Cleanup Program, supervised by the Department of Environmental Conservation. The project will use fill materials from the Colvin Estates residential subdivision in North Buffalo to replace the soil that will be removed in the costly cleanup.

"To our knowledge, this is the largest conversion of an industrial brownfield to residential in New York State," Alexander said. "That, in itself, is pretty significant."

The project will be funded with state brownfield tax credits, low-income housing tax credits and funding from the state Division of Homes and Community Renewal, through its Housing Finance Agency. Construction on the first phase – the apartments – is expected to finish by November 2019, with the rest of the project wrapping up a year later.