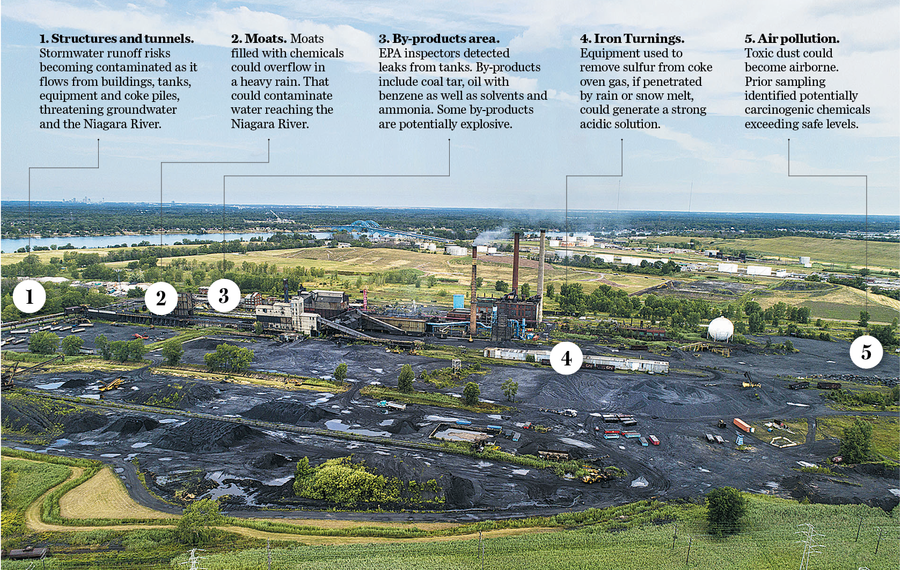 News of chemical-laden moats and toxins that could contaminate stormwater runoff  into the Niagara River sparked outrage from those in the community who had already long worried about Tonawanda Coke's air and soil pollution.

Some of the toxins at the site originated before federal and state environmental regulations were enacted. Other pollutants – including thousands of pounds of benzene – were legally permitted to be released annually.

Digital Engagement Editor Qina Liu collected questions from readers wanting to know why state and federal agencies allowed the pollution, whether legal action is likely and how Tonawanda Coke compares with some of Western New York's other toxic hotspots.

Here are some answers. 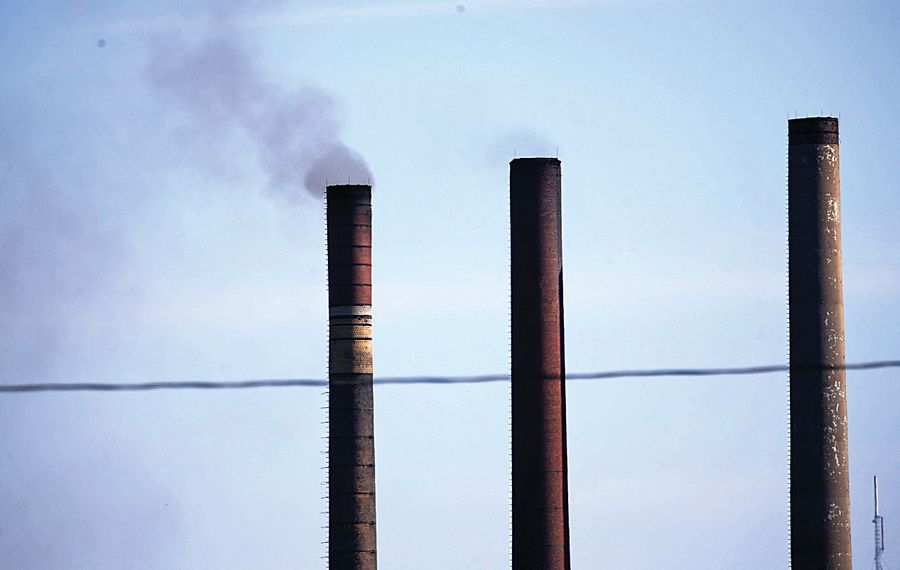 From Debra De Filipps: How was it allowed to get so bad?

Pignataro: Many of the legacy toxins were on the site years before the government adopted rules to stop industries from polluting. Tonawanda Coke took over the facility in 1978, but coke was being produced at the site since 1917. Pollution that followed the 1970s-era federal Clean Water Act and Clean Air Act was deemed legal so long as the company complied with environmental permits. It took community activists taking their own air samples in the mid 2000s – and determined the company was emitting hazardous levels of benzene, a known carcinogen – before the government stepped up its scrutiny. That eventually led to only the second criminal prosecution in the United States for violating federal environmental laws. In 2014, environmental controls manager Mark Kamholz went to prison for environmental crimes. Following that prosecution, Tonawanda Coke appeared to operate in compliance with its permits. But when a waste stack tunnel at the company failed early this year, it set in motion a series of events that led to Tonawanda Coke's conviction for violating its criminal probation.

Pignataro: That would surprise no one. And, a class-action suit is already pending in state court. However, there are doubts about how much anyone could collect. The company is in bankruptcy proceedings. It shut down in mid-October amid reports that it couldn't make payroll and was unable to obtain loans to make its final community service payments required by the federal court in the 2014 criminal sentencing against the company.

From Caryn Siwek Atkinson: So many unanswered questions here. How were these violations not addressed by the EPA while they were operating and dumping in the river for years? Who was getting paid off? Who has to pay for cleanup now? So sad & frustrating...

Pignataro: First, the frustration from residents in Tonawanda and Grand Island is palpable. There's no indication, nor have there been any suggestions, that any public official with responsibility for enforcing environmental regulations was "paid off." Until the Clean Water and Clean Air laws, industries like Tonawanda Coke's predecessor, Allied Chemical, and many other companies operated in a far less strict regulatory environment when it came to polluting air, land and water. That has changed, with companies now required to obtain permits from state and federal agencies and comply with their terms for both limiting pollutants and reporting them. In the mid to late 2000s, Tonawanda Coke wasn't abiding by the law. The company was criminally convicted in federal court. As for the cleanup now, it's likely the property at-large could wind up as a state or federal Superfund site. Taxpayers pay for Superfund cleanups. The EPA notes, however, that "whenever possible, the EPA forces those responsible for contaminating a site to clean it up."

From Cynthia McKinnon: Aren’t there environmental requirements for industrial sites? Look how close the contamination is to the river!

Pignataro: There are environmental requirements for industrial sites. They're called permits, and they effectively make it legal for companies to pollute the air and water to a prescribed limit. The state Department of Environmental Conservation issues air and water permits based on the federal regulations established by the Clean Air Act and Clean Water Act. For instance, according to the U.S. Environmental Protection Agency's Toxics Release Inventory's latest data from 2016, Tonawanda Coke reported emitting 4,010 pounds of benzene at its site, 3,533 pounds of ethylene, 518 pounds of napthalene and lesser amounts of propylene and xylene.

From Robert Biniszkiewicz: Any corporation producing significant toxic byproducts as the result of its operations should have to bond the cost of future cleanup as they go. Why do we allow the taxpayer to always foot the bill? Private profit is bolstered by the deliberate shirking of any responsibility on the part of the polluter.

Pignataro: Cleanups and re-development of contaminated sites like Tonawanda Coke are often funded following listing on the state or federal Superfund registries. Because those are based on environmental priority, and limited funds are available, they can take years or even decades to complete. That's long been the case. More recently, brownfield cleanup programs have sometimes enabled quicker turnarounds for contaminated sites by providing incentives to owners of contaminated properties to clean them up and re-develop them. Changes to existing laws or regulations would likely be required to cover cleanup costs in advance.

From Craig Philips: Didn’t Spaulding Fibre leave a huge mess in Tonawanda? Who cleaned it up and did the taxpayers foot the bill?

Pignataro: The large majority of Spaulding Fibre's 45-acre site at 310 Wheeler St. in the City of Tonawanda was left contaminated when the vulcanized fiber manufacturer closed in the early 1990s and subsequently abandoned the property after declaring bankruptcy. Remediation of the site was done under the state's Environmental Restoration Program. Erie County documents show the cleanup and development of a business park at the site cost more than $20 million. About half of that came from the state Department of Environmental Conservation. Erie County paid $3.4 million. Empire State Development paid $3.2 million. The City of Tonawanda paid $2.5 million. Other entities like the federal Department of Housing and Urban Development and National Grid also contributed funds.

From Scott Macleod: Not sure why anyone is shocked at this. How long has Bethlehem Steel been sitting vacant and toxic?

Pignataro: Bethlehem Steel closed in the early 1980s. The more than 1,600-acre site has since been divided into numerous sub-parcels to make cleanup efforts more manageable. Following the bankruptcy of Bethlehem Steel in the early 2000s, Tecumseh Redevelopment, which is headquartered in Ohio, obtained title to the property. Since then, friction has developed between the company and Lackawanna city leaders about the pace and scope of cleanup efforts on the site, which in places remains contaminated with a variety of hazardous chemicals. Although large swaths of the site remain undeveloped, some parcels have already been remediated and rebuilt for commercial use. The Steel Winds energy farm is located on the site. So, too, is Welded Tube USA and some other commercial and manufacturing businesses. In 2017, Erie County purchased nearly 150 acres of the site from its current owner, Tecumseh Redevelopment, for $5.5 million, with aims at future redevelopment. In that case, Tecumseh paid for remediating the site prior to the sale.

From Asmond Chad Hazzard: So, what are we gonna do? Mourn about this today and forget about it tomorrow, right?

Pignataro: That depends on who you ask. Joseph H. Emminger, the Town of Tonawanda supervisor, doesn't feel that way. In recent weeks, Emminger caught some jeers after suggesting the site could be paved over and reused as a future home for the Buffalo Bills. But his broader point was that something needs to be done with the site in the nearer future, not 50 years down the road. Emminger told The News environmental assessments need to be done and there needs to be sufficient momentum in place to carry it through to clean-up and redevelopment. “I’ve never been given any indication that it is a catastrophic situation, but we are concerned about the site," Emminger said after the company closed. "It’s a brownfield site, a contaminated area in our town. The good news is, brownfields can be reclaimed.”

Story topics: You asked we answered 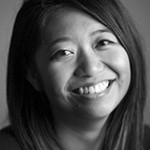 Qina Liu– Qina Liu is the digital engagement editor at The Buffalo News. Contact her at qliu@buffnews.com.