It’s hard to imagine a more wholesome Christmas story than the one about the three French prisoners who worked on the shop-owner’s roof and then killed his cousin with a snake. You know the one.

Samuel and Bella Spewack’s 1953 play “My Three Angels” is exactly that holiday gem, and then some. It’s just as ludicrous as that only somewhat-abridged summary sounds, while also being sweet and heartwarming—and very funny. A wonderfully fit production of the Spewacks’ play opens the New Phoenix Theatre’s season.

You probably don’t recognize the husband-and-wife playwrights by name but you might have seen adaptations of this work on the big screen. The 1955 movie “We’re No Angels” starring Humphrey Bogart or the loosely adapted 1989 remake with Robert DeNiro and Sean Penn are two examples. The couple also won a Tony for writing the book to the Cole Porter musical “Kiss Me, Kate.”

It’s surprising to me that none of their other plays took off the way these did. This is a very funny play, rife with dark comedy, farcical antics, holiday-soaked cynicism and, at least right now, political relevance. I imagine it might have played well in the early 1970s amid the echoes of Richard Nixon proclaiming that he was not a crook. Yeah, sure. 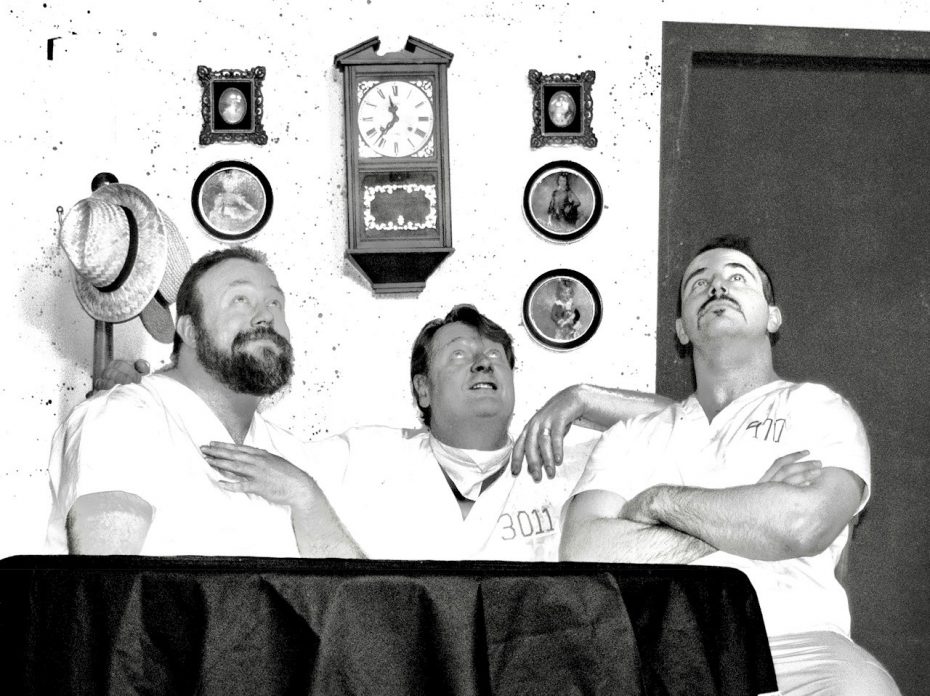 Elliot Fox, Richard Lambert and Brett Klaczyk are wonderful in their roles as "My Three Angels" at New Phoenix Theatre.

Today, the story of the three goodhearted—and proudly guilty—convicts determined to remedy a hardworking family's financial woes seems even more delicious. In fact, when played as wholesomely as director Tom Makar has laid out here, the wink-winks get even bigger. The only sour note is the play’s three-act and two-intermission running time. It’s all great, but just a few minutes too long for such a quaint holiday allegory.

Makar’s work is wonderful. The show moves along breathlessly, its actors relating comfortably and easily with each other, and the script’s sometimes nuanced humor landing with appropriate punctuation.

This is only an assumption, but if this late start to the theater’s season (on account of the theater receiving a new roof, ironically) meant more rehearsal time, then this performance is a winning case study on the value of preparation. Opening night played like it had been open for weeks. Either way, nice work all around.

Richard Lambert, Elliot Fox and Brett Klaczyk, our three angels, are a delight, all charming and devious in their own way. Lambert, doing what Lambert does best, is the ambitious one; Fox is the sensible one; and Klaczyk is the doe-eyed one. You could pluck them out of this harmless tale and plop them in a sequel, or TV series. They are three parts of one adventurous soul.

John Kreuzer and Julie Kittsley are a winning pair as the shop owners who take in the three convicts for home improvements. Kittsley is especially endearing as the dutiful wife who knows more about the household than her husband realizes. (The play takes place in 1911, but the domestic humor lands nicely today.) Kittsley and Fox are both revelations in this cast of familiar faces.

Betsy Bittar, Jamie Nablo, Mike Benoit and Brendan Didio all fill their roles with aplomb and panache. Jack Agugliaro is particularly menacing as the inconvenient cousin who befalls that deadly snake.

I’m tempted to explain the snake’s character arc in more detail but would rather you open this gift on your own. You’ll thank me later. Happy holidays.

*Read more theater reviews by clicking the Story Topic below.