Tesla Inc. this week pulled back the curtain on its solar products factory in South Buffalo, and revealed that the plant's employment has grown to 800 people.

Tesla invited members of the local media for a tour of the RiverBend gigafactory, which makes solar roofing tiles. The 1.2 million-square-foot plant was a highly publicized economic development project, part of Gov. Andrew Cuomo's Buffalo Billion program, but has been something of a mystery to outsiders since starting production.

Tesla has been reluctant to show off its manufacturing. And even for this week's tour – the first time the media was allowed inside since Tesla took operational control of the state-owned facility more than two years ago – reporters were allowed to see the equipment and workers in action, but not take any of their own photos or videos. That's a departure from many major manufacturers in the region, like the General Motors and Ford plants, when they showcase new products and investment.

Tesla officials say employment at the plant has climbed to 800 people, a figure split evenly between Tesla and Panasonic, but wouldn't specify how many of the Tesla jobs are production positions. They said the plant is well ahead of the 500 employees the company pledged would be on site by April 2019.

The clock started ticking in April on Tesla's promise to create 1,460 jobs at the RiverBend factory within two years and to bring 5,000 jobs to New York within 10 years. Tesla made the commitment in exchange for the state spending $750 million to build and equip the plant. Tesla said it is on target to hit that milestone. But if it doesn't, Tesla could face a penalty of as much as $41.2 million for every year it falls short.

To meet the April 2020 target, Tesla must hire 660 employees during the next 17 months, increasing the facility's workforce by more than 80 percent. Tesla executives said they will continue to hire in 2019, but didn't provide projections of how many new employees would be added.

Inside the Tesla plant on South Park Avenue, employees in black Tesla shirts operate advanced equipment. Yellow robots are stationed around the floor. The facility operates around the clock, with employees working three days on, then four days off.

The plant's machines work together to create the main product: solar roofing tiles, which look like conventional, black roof shingles but contain solar cells. The result is what is referred to as a "solar sandwich," with the electronic components between glass panels. Tesla officials said solar roofing production is ramping up, but wouldn't say how many tiles are being produced at the plant.

Vast parts of the production floor still aren't covered by manufacturing equipment, and Tesla wouldn't specify what percentage of its manufacturing space it is using. But officials said more of the open space will be steadily absorbed, as additional equipment is installed and more employees are hired. Such an expansion is underway now, they said. (Tesla provided a look at its own manufacturing operations, but not those of its partner, Panasonic, which shares the facility and makes solar cells used in Tesla's roofs.)

Corey Leone, 40, works at the plant in facilities maintenance. The Chautauqua County native said he previously worked at coal-fired power plants in the Town of Tonawanda and Dunkirk that have since shut down.

"To be able to come here and do green energy, to go from coal to this, it's been amazing," said Leone, who has worked at the Tesla site for about three years. 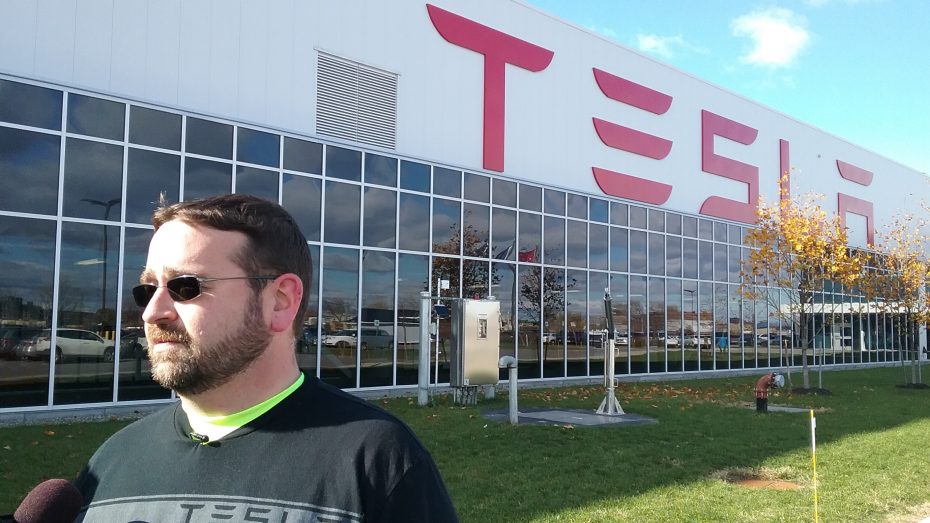 The contrast between the old power plants and Tesla's plant is striking, he said. "It's state of the art. That was old, archaic technology that is old and outdated. The future is what we're doing here."

During the last election, a few candidates for office held press conferences outside the South Buffalo factory, taking aim at Cuomo's economic development policies and using the Tesla plant as a symbol for their criticism. Leone said he noticed.

"I watched a lot of (the coverage) and I had to bite my tongue, knowing that I have a code of conduct I had to abide by," Leone said. "It was really hard to see the negativity. But what we're doing here is great."

Alex Finnerty, 24, has worked at the Tesla plant for about seven months, as a quality assurance inspector. He had worked in sales and marketing positions before. The Lockport resident said he gets a lot of questions when people find out he works at Tesla.

"It's definitely a conversation starter," he said. 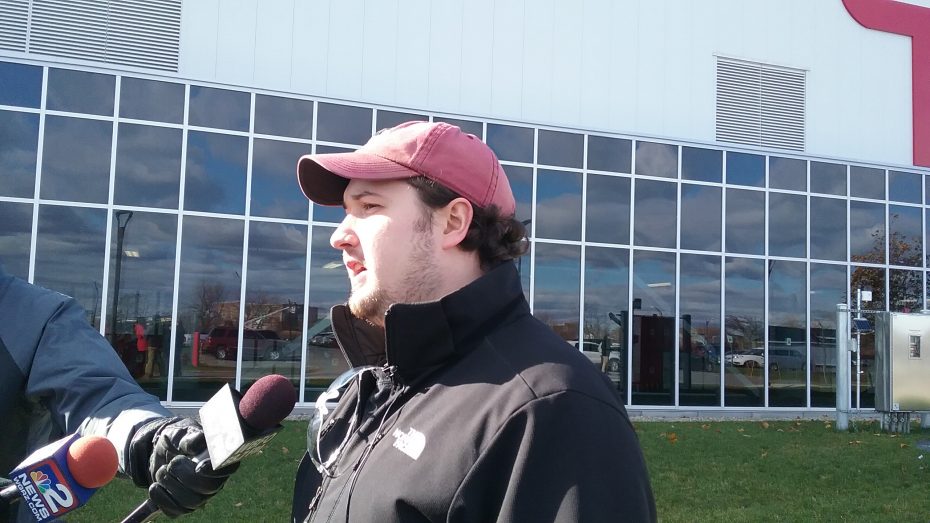 Alex Finnerty is a quality assurance inspector for Tesla at the RiverBend plant. (Matt Glynn/Buffalo News)

Assemblyman Sean Ryan, D-Buffalo, said he is waiting for Tesla to deliver on the promises of its local impact. Ryan said there hasn't been the anticipated "economic ripple" beyond the walls of the facility.

"We're hoping this would have developed a whole secondary system of suppliers, but they haven't been using enough materials there to have the secondary suppliers," Ryan said. "If they do come up to a full production facility, we're hoping that will have a ripple effect," like the steel plants did in the past, he said.

Ryan said he has read a lot comments from Musk about the company's quest to hit production target at its automotive and battery plants.

"We would like to have Elon Musk, his legendary brainpower, behind this factory. And we'd really like to see him in Buffalo, talking about what's going to happen at this facility and also to bolster the public's confidence in the public investment with him as a partner," Ryan said.

Tesla is counting on the solar roof to reinvigorate the solar energy installation business it added through its 2016 acquisition of SolarCity. But the solar roof, like most of Tesla's electric vehicles, has been plagued by production delays.

For now, though, Tesla’s solar energy business still revolves around conventional rooftop installations, and those have been declining. Tesla installed 93 megawatts of solar energy generating capacity during the third quarter, down from 17 percent from a year ago, but up 11 percent from the second quarter. Its solar deployments are down 42 percent through the first nine months of this year, and are 61 percent less than they were during the first three quarters of 2016.

To fill the Buffalo plant, which Tesla executives said can produce five times as much solar generating capacity as the company currently needs, the solar roof will have to be a hit with consumers.