On Thursday morning, Jeff Tracy and his friends will rekindle the inside joke about a $9 collect phone call.

The YMCA Turkey Trot is about more than running the 8K course from North Buffalo to downtown. The tradition that now dates 123 years and people's stories are at its heart. And the stories usually revolve around three things – friends, family and weather.

One of Tracy's favorite stories takes place about 14 years ago, when cellphones were prevalent but not attached to everyone's hips. At least not his buddy Mike's.

Tracy runs with a group of friends from Niagara County's Camp Kenan and this particular year Mike, a stronger swimmer than a runner, decided to join them. Tracy parked at the finish line and ran to meet his group at the Dunkin' Donuts near the start of the race. The race went well and Tracy was at the finish with Mike's wife, Steph, waiting for Mike to cross the line. They waited and waited with no sign of Mike.

"Meanwhile, I keep getting all these phone calls from unknown phone numbers on my cellphone, and I was thinking, 'Boy the telemarketers are being really aggressive on Thanksgiving morning,' " Tracy said. "I just kept ignoring them. Finally, one of the numbers left a voicemail. I listened the voicemail and it was Mike. He was just past Gates Circle. He had borrowed someone's phone. He thought he had injured his Achilles tendon and wasn't going to be able to finish."

Steph jumped into wife mode and started to run back to Mike while Tracy rounded up the rest of the gang in his truck to drive and pick him up.

Then came another call, this time from a Texas number. Tracy answered and it was an old-fashioned collect call, informing him the charges would be $9.

"I was like 9 dollars! One of my friends in the back seat said, 'Hang up! Don't accept it!' " Tracy said. "I hung up but Mike could hear us. We pick him up and he's hanging out a gas station with the people selling flowers for Thanksgiving. Sometimes he can be a little overdramatic, and was saying how he couldn't walk and his best friends wouldn't take this collect call from him.

"We tried to tell him we were on the way and didn't need to spend the $9, but then he said that he couldn't believe he wasn't even worth $9 to his friends. We tell that story every year."

Thursday will be Ann More's 27th Turkey Trot but her most memorable was the first one she ran in 1992. Granted it was her personal best (in a time of 38:55), but it was more about her dad, Henry Goldman, who showed up at the finish line. 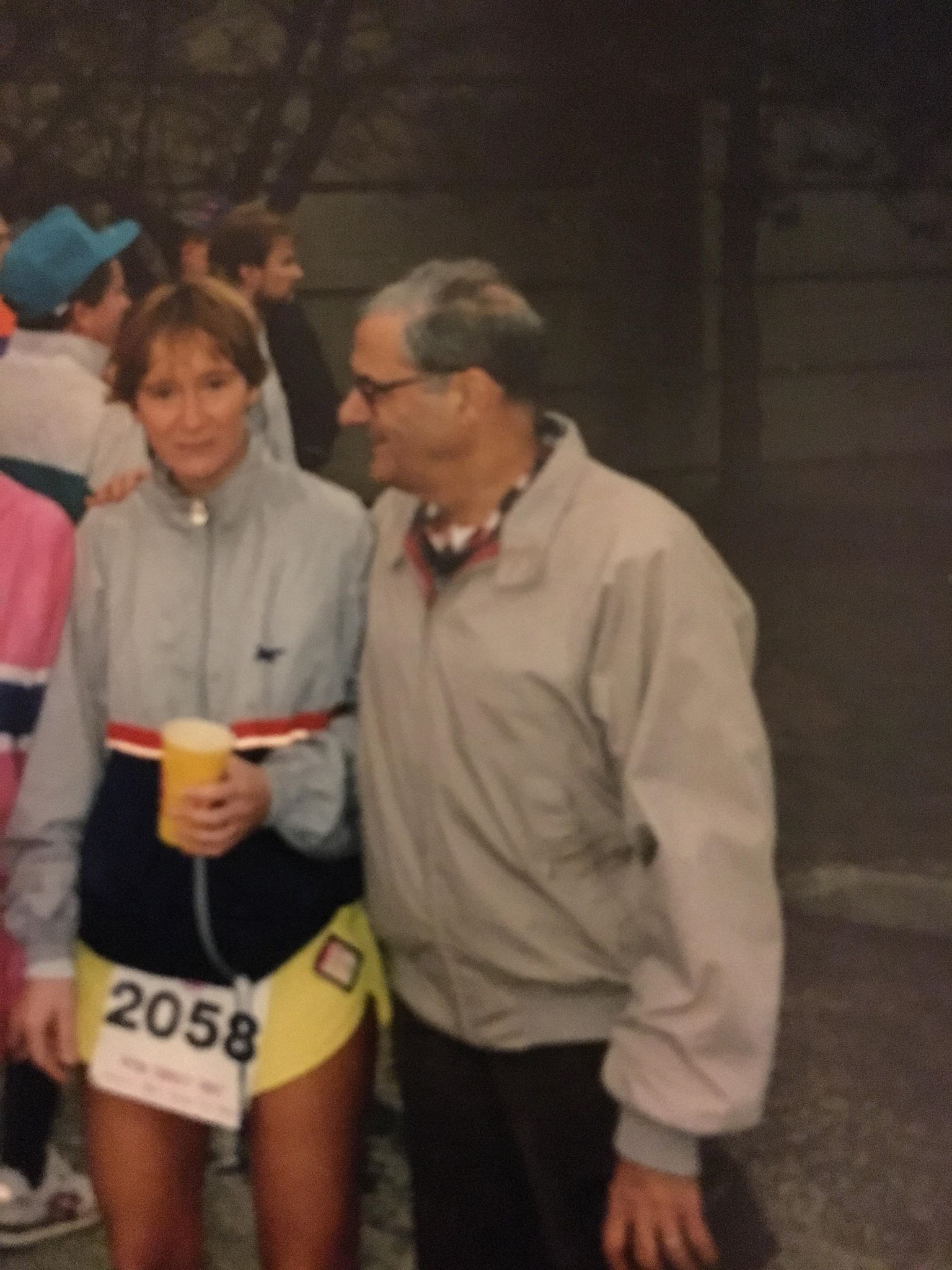 Ann More with her father.

"My dad thought I was crazy," More said. "He'd ask why I was doing this and that I was going to die out there."

But Goldman was at the finish line, back when the race concluded at War Memorial Auditorium, and he was impressed.

"Because he saw it and he saw how much fun people had, he decided to walk it the next year," More said. "Before you knew it, my mom was walking it, too. It became a family tradition."

The tradition continues as for the last seven years, More's son, Cameron, has run with her.

And it wouldn't be a Turkey Trot without at least one weather story. Let Sue Devlin explain one of her most vivid memories:

"It was the year they almost canceled because of the snow. It was like 10 degrees," Devlin said. "I ran with my son, but he left me at the 1 mile mark because I was going a bit slow. I think I ran a 6:30 mile. But it was so cold my feet were numb. I didn't even know I had cut my foot and my sneaker was bloody, but I never felt a thing."