Even before the curtain rises on "Hamilton" on Nov. 20, the long-awaited show has had a seismic impact on Shea's Performing Arts Center.

Thanks to the Broadway juggernaut, the theater sold a record 18,474 Broadway Series subscriptions for the 2018-2019 season, an increase of 3,025 more than the previous record.

However, the number of subscriptions probably could have topped 23,000 with the "Hamilton"-propelled interest, covering all 3,019 seats, said Albert Nocciolino, Shea's longtime co-presenter of traveling Broadway shows. The sales were halted to make sure a limited number of single-seat and group sales tickets were available for every performance of the season's six shows.

"We certainly could have sold out our subscriptions, but we felt this was the fairest thing to do for our market and to those who can't come to every show," Nocciolino said.

It was a necessary decision, Shea's President Michael Murphy added, though not an easy one.

"We were concerned about disappointing people by cutting it off," he said.

Still, there are worse problems to have.

"No one ever, ever imagined, anticipated or dreamed that we would be capping subscription series here or around the country, and doing the kind of business we're doing," Nocciolino said. "It's a glorious, wonderful time not only on Broadway but for shows on the road as well. This is the 'Hamilton' era."

Few could have predicted early on that the story of Alexander Hamilton, one of America's Founding Fathers, would become a theatrical sensation.

Lin-Manuel Miranda, who wrote the book, music and lyrics, tells the story in a contemporary way with diverse casting and a score that blends hip-hop, blues, jazz, rap, R&B and Broadway. The musical garnered a record 16 Tony Awards in 2016.

"The topic — a musical Alexander Hamilton — and the way it is presented is unique," Murphy said. "There's hip-hop, the most exceptional among the different styles of music, and perhaps foreign to musical theater audiences. The incredibly diverse cast had a big impact. People accepted whoever was playing whatever character, and that made a statement. It is helping to change how we look at casting going forward."

The excitement over "Hamilton" is palpable, he said.

"It's fascinating for me — having been in this business for as many years as I have been — how people feel such ownership of this show," Murphy said.

He attributes it, in part, to the popular cast album, articles and television specials and Miranda's charisma.

"They feel 'Hamilton' is theirs, and that's it's a part of their lives," Murphy said.

Nocciolino, who has won four Tony Awards and reaped seven nominations as a theater producer, said people have asked him why "Hamilton" is such a big deal.

His answer: "It all will be understood the moment the lights go out and they see what's happening from the first minute of the show." 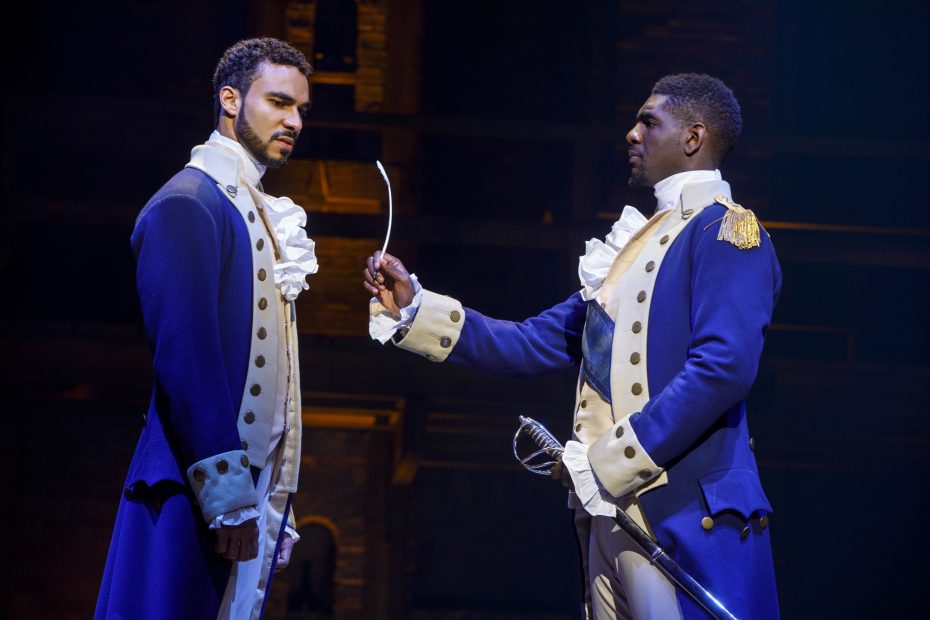 Austin Scott and Carvens Lissaint star in the national tour of "Hamilton." (Photo by Joan Marcus."

Shea's hasn't seen the same increase in subscription growth as some theaters, but that's because of its prior success. The theater — which has had its subscriptions increase by about one-third since the 2010-2011 season, when there were 12,379 subscribers — was already one of the most successful in the country for one-week traveling Broadway shows.

Nick Scandalios, past chairman of the Broadway League, based in New York City, said that Shea's is in "an elite group."

"One of the most impressive things about Shea's is that it has been maintaining its strong subscriber base over a sustained period of time," Scandalios said.

In Rochester, where Nocciolino is presenting "Hamilton" at the Auditorium Theatre, subscriptions have doubled from more than 7,000 to more than 14,000, he said.

"This has been the norm around the country," he said.

Win friends and influence your Twitter followers with some 'Hamilton' trivia

Broadway is bulging at the brim with new theater productions.

"If you go to New York, there is a backlog of new shows," Nocciolino said. "Producers just can't get theaters. There are a lot of shows being developed waiting in line to get a theater."

But it's also a boom time for touring Broadway venues, and the people who produce and present the shows.

The dramatic boost in subscriber sales has meant theaters are more willing to take chances on lesser-known, quality shows because they're not as dependent on single-ticket sales.

"There are now more shows touring than ever before, and there is also a greater demand for shows," Nocciolino said. "Shows that normally might not get out on the road are finding life."

Shea's is in an enviable position for one-week Broadway shows.

"Because of our success, we're first in line," Nocciolino said. "They all want to come to Buffalo because we do the business."

Murphy said the quality of Shea's audiences are another reason why he believes touring Broadway shows want to play there.

"Something I've heard from producers and publicists about Buffalo is that they know they are getting a smart audience, an appreciative audience, an audience that understands musical theater and appreciates that night in the theater," Murphy said.

Nocciolino predicts "Hamilton" will bring people into the theater who don't usually go.

"This show will bring in a more diverse audience than we are normally accustomed to having, which is wonderful," Nocciolino said. "We will have thousands of people who have never been to the theater before, and I think that once they get into this theater and see a show, they're coming back."

"What we're finding across the country is that 'Hamilton' is bringing us new subscribers and new audiences," said Scandalios, Nederlander's executive vice president. "If their experience in the building is one of feeling inclusive and the overall experience is good, they stay. No doubt the same will happen in Buffalo."

Miers, Dabkowski and Siegel debate the music of 'Hamilton'

Ready for its close-up

Shea's is ready and waiting for the three-week, 24-show engagement that ends Dec. 9.

The restoration of the ornate 1926 theater built by famed movie palace architects Rapp & Rapp began in the early 2000s, and was completed under previous president Anthony Conte.

The theater's grandeur is sure to be part of the "Hamilton" experience — especially for newcomers.

"The restoration of this grand movie palace is one of the things that has helped make us successful," Murphy said. "We have great product, but when you come in it's a place of wonder. It is the Wonder Theater."

How do you top "Hamilton?"

"You bring it back," Nocciolino said.

Although most shows return an average of four to six years, "Hamilton" may not wait so long, he added.

"With four touring companies, it's fair to say that the plan is for 'Hamilton' to revisit as often and as much as it can, and as soon as possible," he said. "Stay tuned."

A limited number of tickets, which range from $83 to $425, may become available for sale. Check sheas.org or ticketmaster.com.