The latest on this story: Emily Scheck has stopped accepting donations to her GoFundMe page. "What has been given is more than anyone could have expected," she said in a statement Nov. 20.

Canisius College sophomore Emily Scheck had just moved back onto campus in August as a cross-country and track athlete when her mother came across photos of Scheck and her girlfriend on a photo-sharing social media site.

Her parents, who had been unaware their daughter was a lesbian, demanded she come home to the Rochester area, give up her partial athletic scholarship to Canisius College, commute to a local college and participate in counseling sessions. When she refused, her parents cut her off.

"I couldn’t even get groceries, initially," said Scheck, 19. "I was just really relying on my roommates and my girlfriend."

What happened next launched her into a public controversy over whether money raised for a student through a GoFundMe page should disqualify that student’s athletic eligibility under NCAA rules.

Scheck said she appealed to the college for help after her parents’ ultimatum, but college officials were slow to provide any concrete solutions. After three months, a frustrated roommate posted Scheck's story on a GoFundMe page. Money started pouring in. But when the college alerted the NCAA to the GoFundMe page, Scheck's student athlete status and partial scholarship were suddenly in jeopardy.

OutSports first reported Scheck's predicament last week. At that time, the NCAA stated it was "currently reviewing all options" regarding Scheck's situation. The NCAA revised its position Friday after being contacted by The Buffalo News, and said Scheck could keep the money raised through her GoFundMe page as long as Canisius monitors the contributions.

"Emily Scheck can retain her eligibility and continue to receive GoFundMe donations that assist her with living and educational expenses," the NCAA said in a statement.

Scheck, a marketing major, said she was always close with her family until her mother saw the pictures of her daughter and girlfriend in August. This launched a flurry of text messages, none of which changed Scheck's steadfast determination to remain at Canisius. Her mother sent her a text that read, "Well, I am done with you. As of right now, declare yourself independent. You are on your own. Please don’t contact us or your siblings."

When Scheck asked her mother why she would do this, she said her mother texted back, "Because you disgust me." 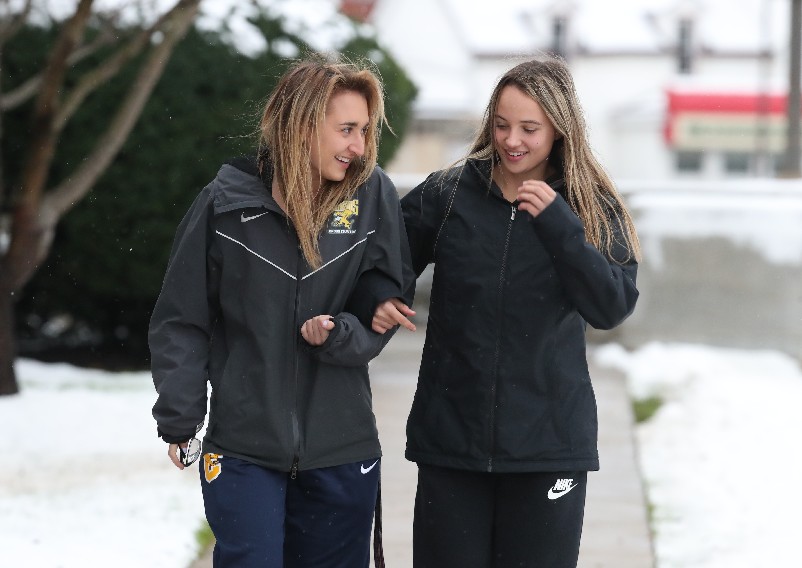 Though Scheck owned a car, she said, her parents removed her from their insurance policy. And shortly afterward, her father drove to Buffalo from the Rochester suburb of Webster with Emily's remaining personal belongings, including her birth certificate, stuffed animals, trophies, childhood photos and clothing. He dumped them in her car and removed the license plates.

Her roommates and girlfriend were shocked to see all of Scheck's belongings brought to their dormitory and began sorting through it in the common room, trying to figure out where it could be stored and where Scheck could move her car.

"I never would have guessed in a million years that this was something that was going to happen to me," she said. "My roommates, they started crying. Me too."

Scheck's father, Timothy, told The Buffalo News that there is much more to the story than his daughter is sharing. The family asked her to participate in counseling sessions, but he said that did not mean conversion therapy. The family accepts her sexual orientation, he said.

Her father said the family wants her to come home so they can work together to heal.

"It's a private family matter," he said. "We love our daughter. We accept Emily."

In response to the harsh messages Scheck recounted, her father said they were written out of initial anger and hurt, and the family has apologized for those words and continues to reach out. Their comments about disowning their daughter were simply meant to pressure her to return home.

Scheck said her family didn't change their behavior toward her until after the GoFundMe page went up. In the meantime, she said, she struggled to make ends meet, working two part-time jobs and going to cross-country practice every day. She relied on her roommates and girlfriend until she received her first paychecks, she said, and continued to field difficult and upsetting messages from her family.

At one point, she contemplated selling her car to cover her spring tuition or just leaving school altogether and working at Wegmans full time so she could have health insurance next year.

She spoke with the assistant cross-country coach about her situation in August, and her head coach two weeks later. She said the head coach told her he would work to help Scheck secure the funding to cover her second semester and possibly assist with housing costs. But two months went by without any further follow-up from the college.

Finally, her roommate had enough and posted the GoFundMe page. 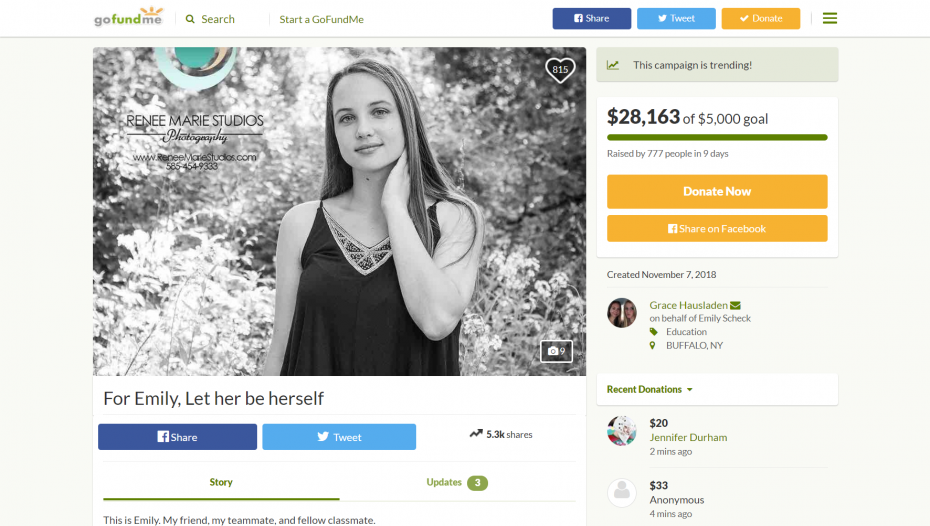 Friends of Canisius College athlete Emily Scheck launched a GoFundMe campaign to fund her education after her parents cut her off.

She raised thousands of dollars, but then was told she couldn't keep it.

Both Scheck and a university spokesman said the information they initially received from the NCAA was that Scheck could either return all the donations and remain on the team while the college tried to work out fundraising alternatives with the NCAA's approval, or she could keep all the money and remain a student but leave the cross-country and track teams.

Canisius spokesman Matt Reitnour said the college has been in contact with the NCAA almost daily to resolve the matter since college administrators learned about the GoFundMe page on Friday of last week. NCAA rules generally forbid student-athletes from using their athletic identity for any fundraising efforts.

For a while, Scheck said, she didn't know what to do. Her roommate changed the photo on the GoFundMe page so it didn't show Scheck in her cross-country uniform, and they temporarily suspended fundraising efforts. But when the college could offer no guarantee the NCAA would support any alternative GoFundMe efforts, Scheck and her roommate decided to quit the cross-country and track teams. Scheck couldn't afford to return the money and take the chance she would be left with nothing.

She was relieved to learn Friday that the NCAA allowed her to retain her eligibility with the GoFundMe page remaining active. As of Friday evening, contributors had raised more than $30,000 for her.

"Canisius and the NCAA will continue to work together in support of Emily," Reitnour said. "She is a member of the Canisius family and we will do whatever we can to assist her."

Things remain much less settled with Scheck's family. Scheck said she has no doubt that her family members love her and have regrets over how they initially reacted, especially after they saw the outpouring of fundraising support she received. Her parents and siblings, who are in counseling, struggle with what they have learned about her. Scheck said she's not ready go home and be part of her family's plans when for months it seemed they didn't want her.

"As long as I stay in Buffalo and I don’t come home, they’ve made it clear that I’m still on my own," she said.