Architect-turned-developer Hormoz Mansouri is hoping to bowl over city planners with a new proposal for a five-story mixed-use project on land just east of Main Street and the Metro Rail line.

Mansouri, president of EI Team, wants to tear down a vacant old bowling alley near the former Central Park Plaza, and replace it with a U-shaped building, with a combination of apartments, shops and parking, according to documents filed with the city.

Those units would be aimed at a mixed-income population, with 20 percent to 40 percent of the apartments geared as "affordable" and the rest offered at market-rate rents, Mansouri said.

The building would also include community room space and 167 surface parking spaces, along with an outdoor courtyard and rain gardens.

Mansouri said, the 34,000-square-foot first floor is 85 percent to 90 percent reserved for rental, with an anchor grocery interested in less than 20,000 square feet, along with several other tenants.

The project marks the culmination of a vision Mansouri had when he first purchased the property and a nearby Dollar General store 15 years ago. At the time, he had tried to work with the Buffalo Municipal Housing Authority on a plan for a new low-income housing project with 220 units. He also tried to entice larger grocery stores, like Wegmans or Tops Markets.

But neither plan materialized, so the property sat until now, when that part of the city is garnering new activity. The site is near the former Central Park Plaza that LPCiminelli bought, demolished and is now transforming into the Highland Park residential neighborhood. And it's just blocks from the Amherst Street Metro Rail station.

"I always thought that area has a lot of potential," Mansouri said. "Not everything has to be in downtown Buffalo, especially housing." 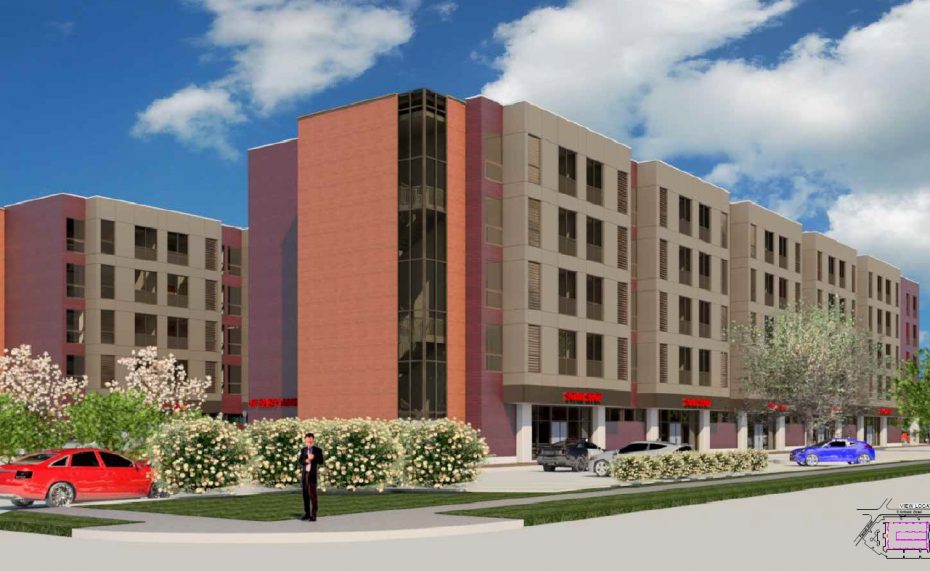 A rendering of Hormoz Mansouri's proposed project, which would include retail space and apartments.

The 3.34-acre site will be accessed from both East Amherst and Holden streets.  The design features a two-tone facade of brick and aluminum panels, with bump-outs along the apartment floors, according to Mansouri's application to the city's Zoning Board of Appeals.

The Board on Nov. 20 will consider Mansouri's request for seven variances from the city Green Code for lot width, height, setbacks, front parking and first-floor transparency. The 425-foot-wide lot would be more than three times the maximum of 120 feet allowed by the code, while the height of 64 feet well exceeds the code's limit of 44 feet in that area of the city. 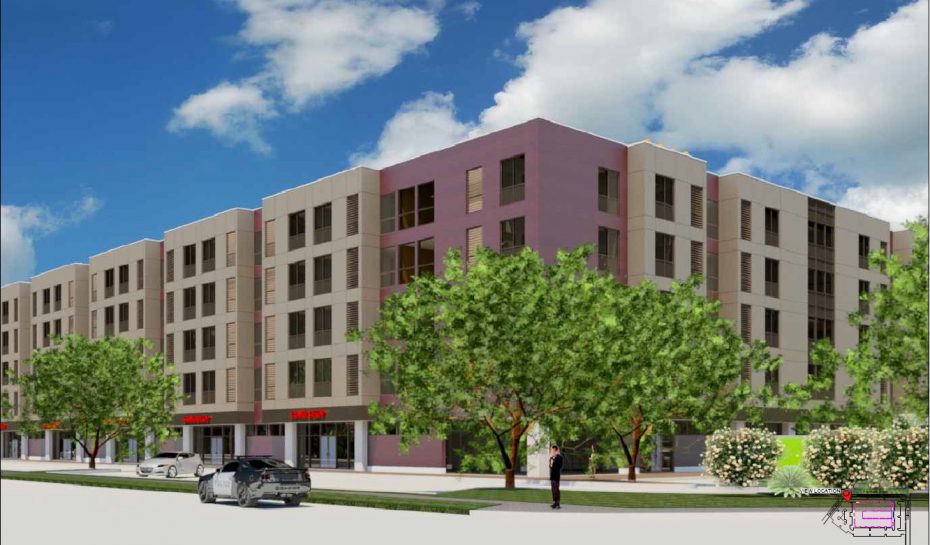 In his application, Mansouri defended the need for the variances, saying the project will be an improvement over the eyesore that sits there currently.

Ronald J. Szatkowski, EI Team's vice president of engineering, said in the filing that the extra four floors of apartments is needed to "make the project financially viable." The setback would reduce the impact and appearance of the taller building on the street. And the additional parking in front and around the corner is needed to ensure convenient access to both the apartments and the retail space, while the new landscaping would serve as a buffer.

Nevertheless, such large-scale projects typically meet resistance from neighbors and others, especially when they require variances from the Green Code.

But Mansouri said he has already been in contact with neighbors, such as the Elim Christian Fellowship Church on Chalmers Avenue, as well as the owner of an apartment building across the street. He's also met with and gained support from Common Council member Ulysees Wingo and the Buffalo Urban Renewal Agency, and will meet with the broader neighborhood as well. 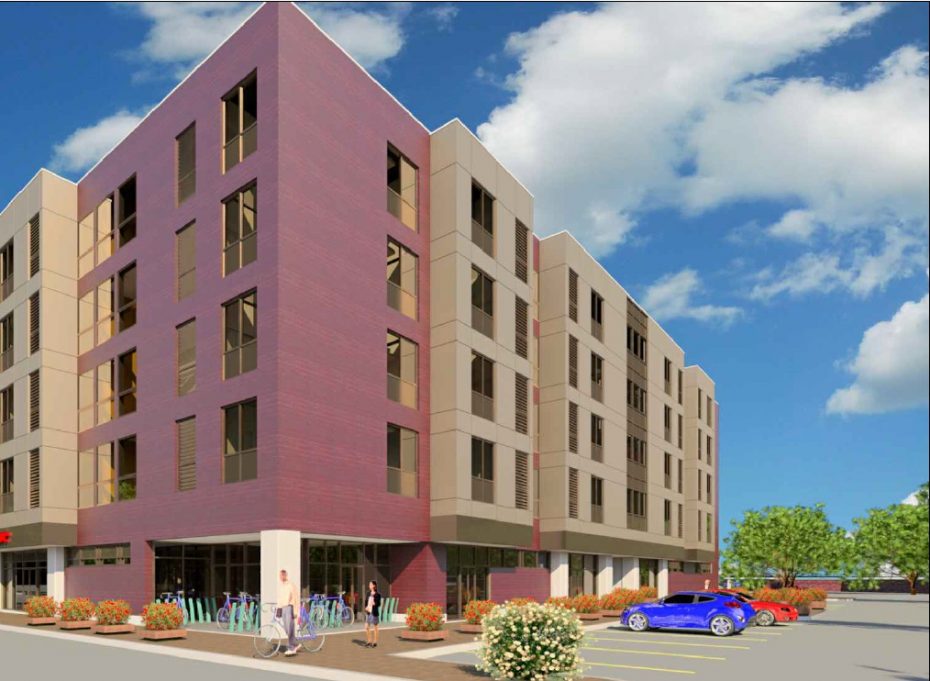 A rendering of Hormoz Mansouri's proposed project at 47 E. Amherst St., from Amherst and Pannell streets.

"They all have been very, very supportive of the project," he said. "Would there be some people from the area against the project? I’m pretty sure there is always somebody against something."

That's also why he went with a combination of market-rate and affordable housing, based on neighborhood input and a market study by GAR Associates.

If approved, Mansouri will bring the project to the city Planning Board next month, before working to secure funding.

The project will be financed using a combination of developer equity, bank loans and 4 percent low-income housing tax credits from the state Division of Housing and Community Renewal, which will dictate the income limits for the affordable apartments. Mansouri said he does not have nor need other investors, although he said he has received inquiries from potential partners. 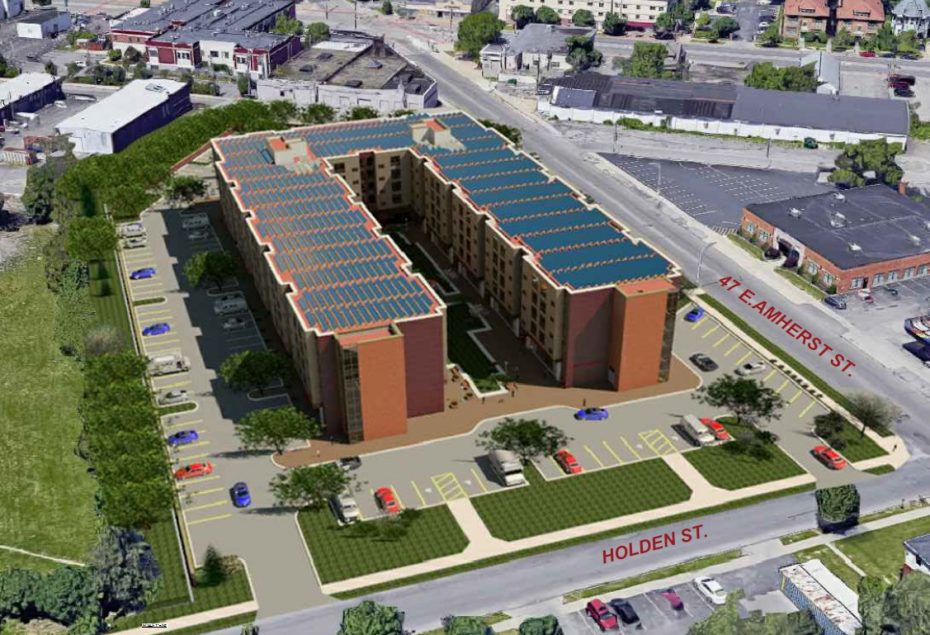