Let the beer experiments begin in the Cobblestone District.

Labatt Brew House, a new innovation brewery and the first of its kind under the Labatt name, will open Saturday alongside KeyBank Center.

Your grandfather will likely embrace the industrial feel of the place – the exposed ceilings, metal trimmings and wooden tabletops – but he never had a Labatt beer the likes of most brewed on-site.

"People are going to walk away with a different idea of what the Labatt brand is all about," said Zach Sciranka, tasting room manager at Labatt Brew House, a $20 million collaborative project between Labatt USA and the hospitality division of Pegula Sports & Entertainment.

Buffalo Bills and Sabres owners Terry and Kim Pegula set the stage for the venture when they bought the former Hi-Temp Fabrication building early last year.

The century-old, five-story structure, the Labatt House, features the Labatt Brew House, which will be run by Labatt USA on the ground floor off the front entrance at 79 Perry St., and the Draft Room, a sprawling 14,000-square-foot beer emporium that will be run by the hospitality division of PSE. The two will open jointly.

Labatt USA established its headquarters on the second floor of the building. PSE will open new corporate offices and four high-end apartments on the top floors next year.

Beer will be the draw. 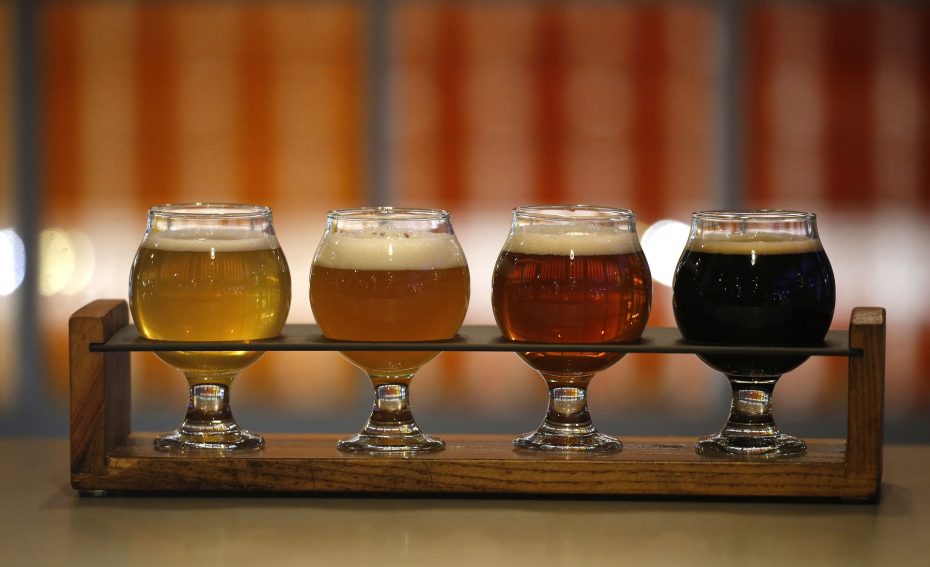 Beer will be the star at the new Labatt Brew House. A flight of experimental beers, from left, include Kellerbier, New England IPA, IPA and a porter. (Robert Kirkham/Buffalo News)

"The experience will start from the moment you walk through the front door,” said Don Heins, PSE director of communications. “You’ll see the brewery. You’ll smell the brewery.”

Features that bring to mind Prohibition, the history of beer and the gritty nature of the bygone city waterfront will take over from there.

“In my mind, this is a two-stop kind of place,” said Rob Hertenstein, brand manager for Labatt USA. “Just past the brewery, the tasting room is your first stop. You try a few beers, figure out what you like, then you check out the rest of the place." 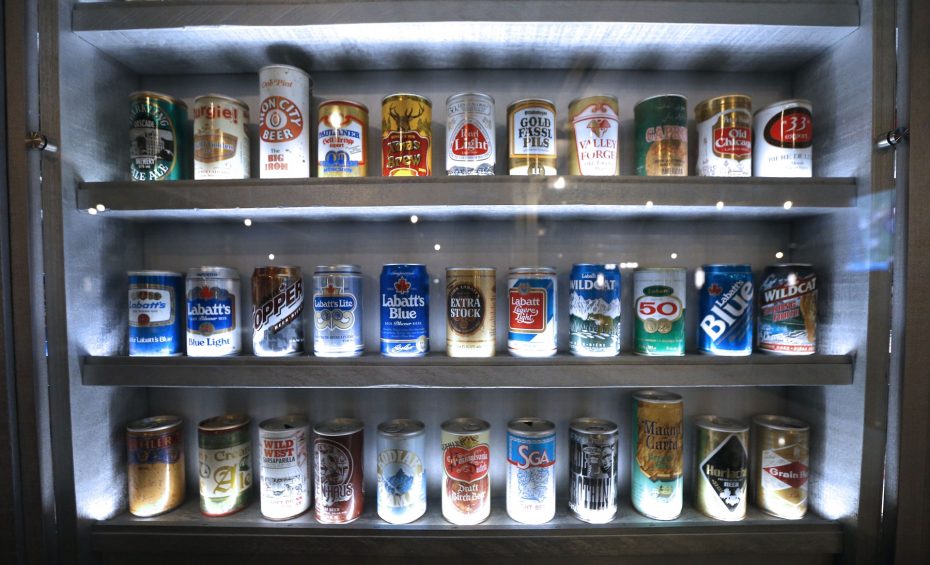 The brewery: Brewmaster Ryan Brady has brewed his first beers on a 10-barrel brew house system that will allow him to have up to 19 craft beers in play in the brew house at any time. Seven “beertenders” will pour “test batches” from eight taps and Labatt standards from four others in a 400-square-foot tasting room that overlooks the brewing operation.

The beers: The first innovation brews – part of the quest to create Labatt's next big beer – will be on tap until the batches are gone (about a week or two). Then they’ll be replaced by different offerings. 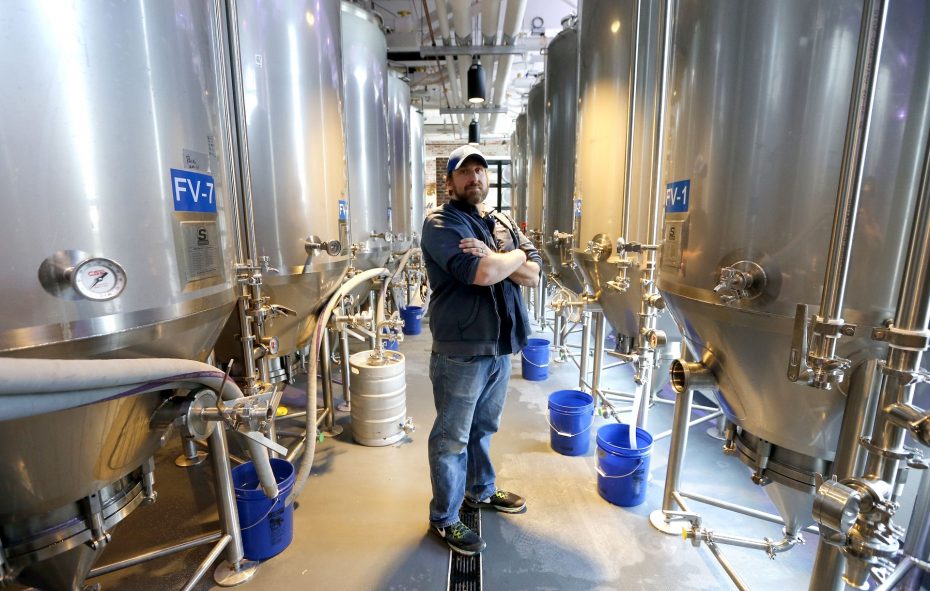 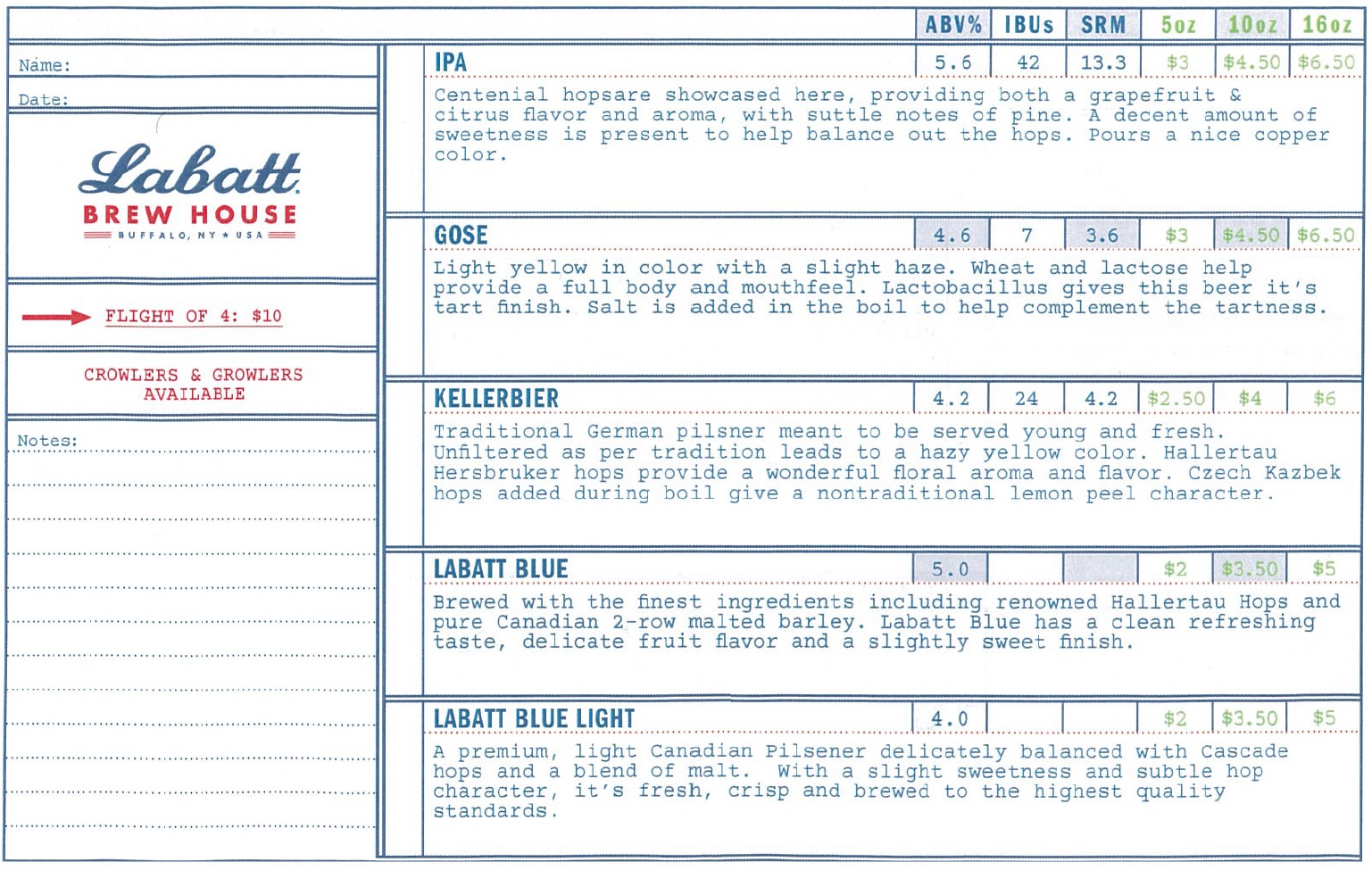 A new flagship?: Tasting room visitors will get the first chance to sample Labatt Blue Citra, which will be poured from two taps in the tasting room and one in the Draft House. There are bigger plans for the approachable hoppy session lager, made with Citra and Mosaic hops, and pale malt. You’ll soon find it in other restaurants and taprooms across the region, as well as some of the successful test beers.

Your opinion counts: Beertenders want your thoughts about what you drink – and what you’d like to sample in the tasting room in the future. Brady said he’ll also check the opinions and ratings on the Untappd beer app, where the new Brew House offerings already are listed.

Unless you plan to take home a crowler or growler, you’ll need to finish your beer in the taproom – but no worries. Each of the beers also will be available in the Draft Room. 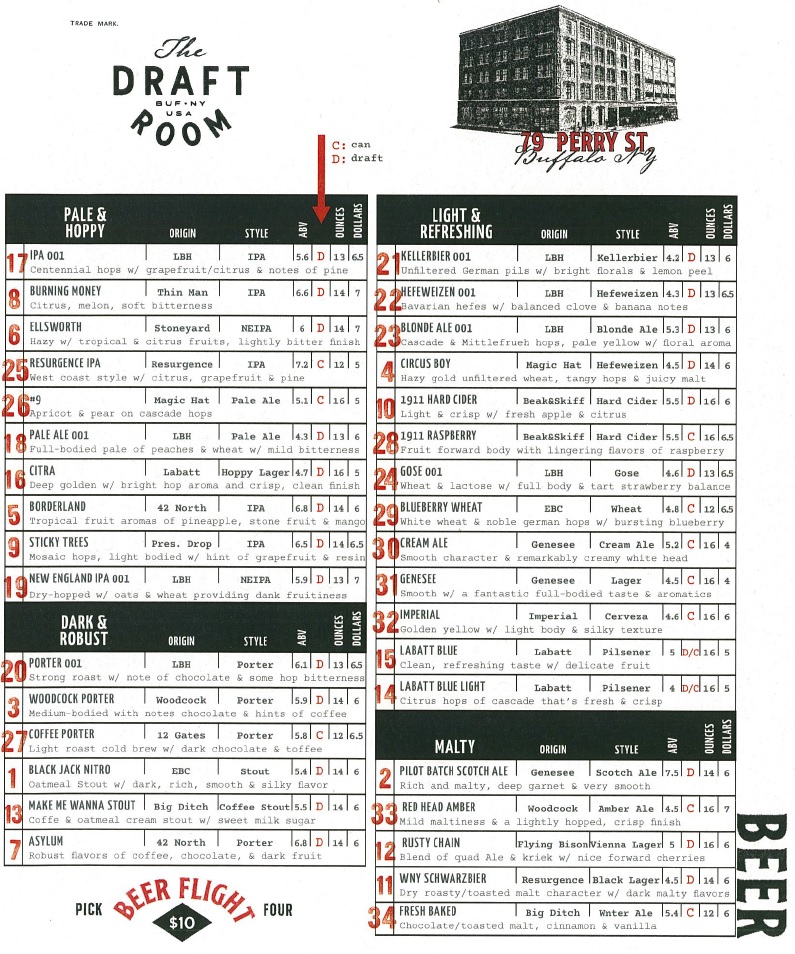 It’s not 716: This is not a sports bar and restaurant like its PSE cousin around the corner at HarborCenter. The Draft Room will have 14 flat-screen televisions and a Canadian rock motif. There are two quartz-topped bars, a front bar with 30 stools and a back bar with 18, plus high-tops, booths and long tables.

To order food, go to the bar or kiosk where you'll receive a pager linked to the kitchen by sensors under each table, helping servers drop off food and take drink re-orders. All the bars in the building have electrical/USB ports that can charge phones and laptops.

It’s bigger than it first looks: A 10,000-square-foot beer hall and 4,000-square-foot patio await outside the tasting room. Heaters will hang from beams that will give patrons a chance to comfortably drink outside (smoking is prohibited). In warmer weather, the staff will open a bar service window onto the patio. Four garage doors near the lower bar will open onto Illinois Street. 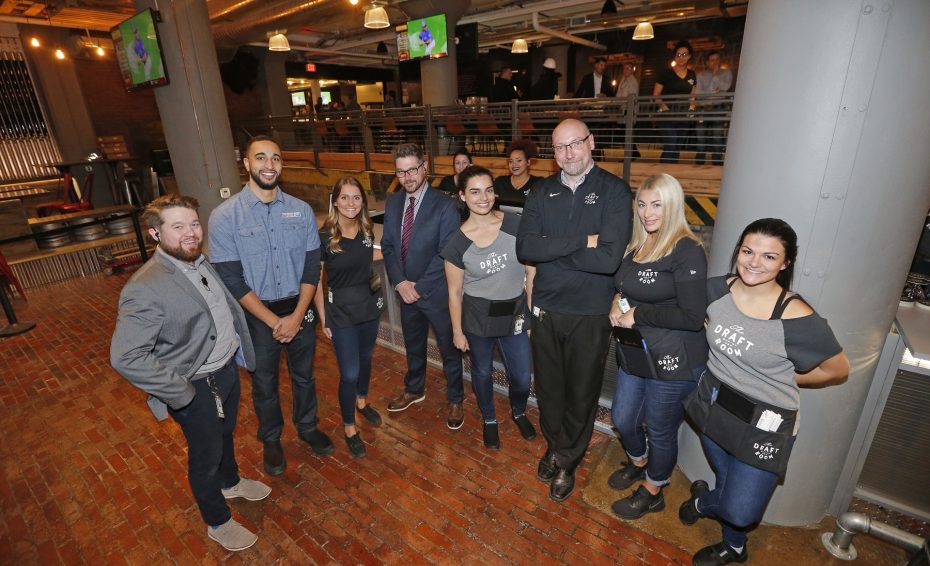 The Draft Room's restaurant staff poses for a picture, including General Manager Brian Tierney, third from right. The new restaurant is connected to Labatt Brew House, a brewery and taproom. (Robert Kirkham/Buffalo News) 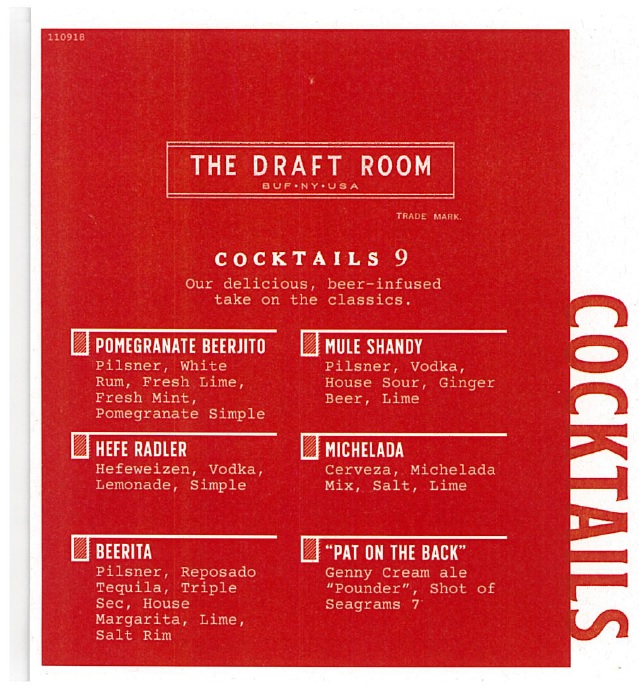 Beer dominates: Choose from 33 beers on tap, including all those sold in the tasting room, Genesee and Magic Hat brands – sold under the flag of Labatt USA’s parent company, North American Breweries – and regional craft beer favorites. Two wines, Dreaming Tree Crush Red and Rainstorm Pinot Gris, and a hard cider will be on tap.

Liquor and mixed drinks also will be available, including six specialty cocktails that include beer as an ingredient. One example: Beerita, a mix of pilsner, Reposado Tequila, Triple Sec, house margarita mix and lime, with a salted rim.

Twists on food: Look for giant housemade pretzels with Bavarian mustard and queso ($8) and Beer BBQ Ribs, with a spicy dry rub and Genesee Cream Ale-infused barbecue sauce ($18 for dinner).

Several dishes are made with beer brewed in-house. The menu recommends which beer pairs best with each food. 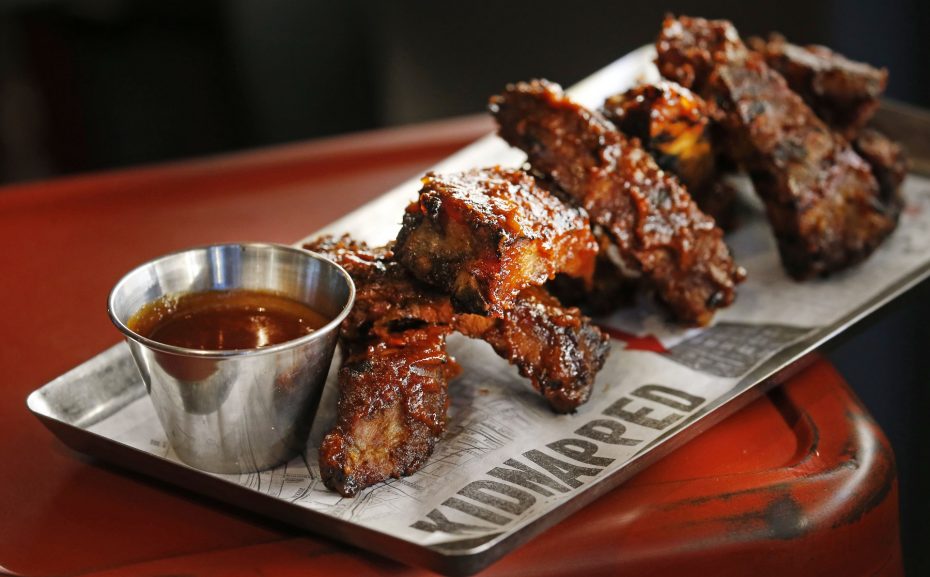 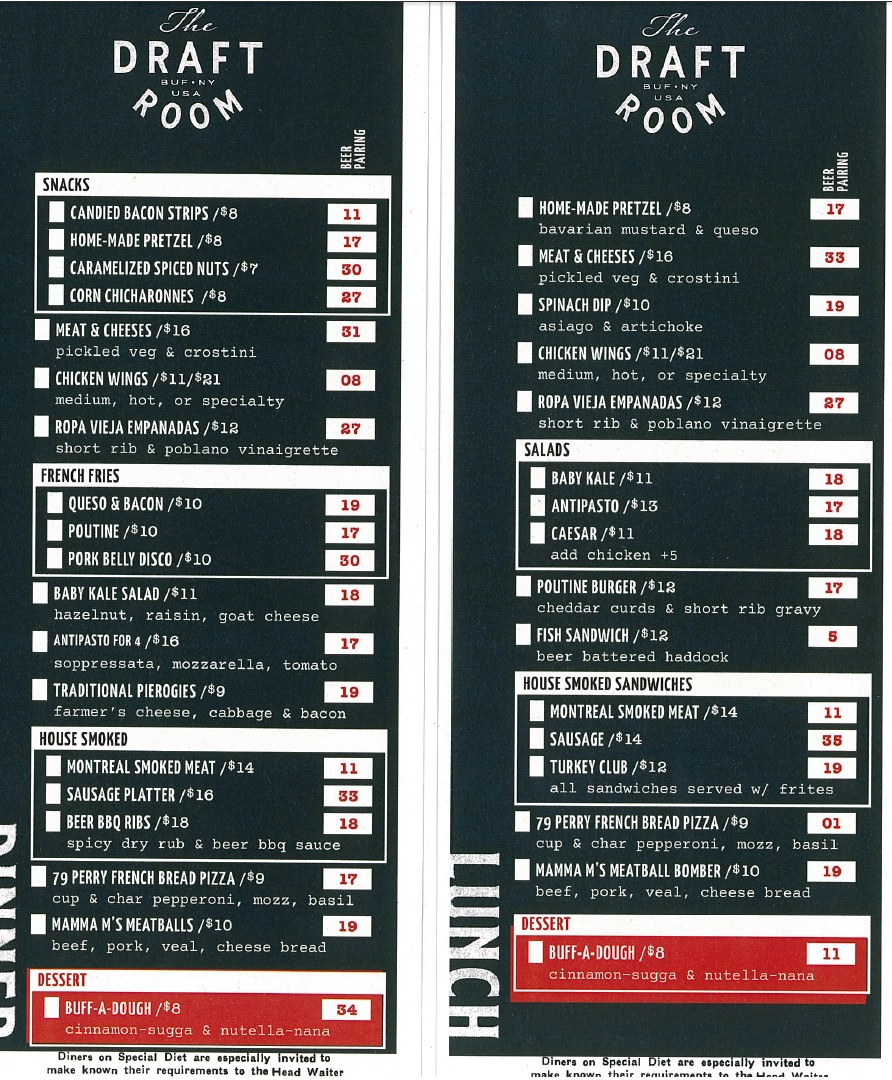 The Ransom Room: Thank a character named Three Fingered Abe for the name of this private room at the north end of the top bar. It’s the only spot in the Draft House where reservations are accepted and sit-down table service is available.

The room includes a newspaper account of Abe, his cronies and a botched attempt to kidnap then-Labatt president John Labatt in 1934. T-shirts marking the event will be among paraphernalia for sale in the beer hall gift shop.