Among the more noteworthy items:

When legislators asked for broad information regarding what types of cases merit the need for so much money in the county's risk retention fund, the assistant county attorney refused to answer publicly, saying she was concerned such information might potentially identify a case. She asked lawmakers to meet with her in closed session under the exemptions provided as part of the Open Meetings Law.

That exemption states that discussions regarding pending litigation can be held privately. This exemption, however, applies to the discussion of specific cases, not generalities.

Historic records: When County Clerk Michael P. "Mickey" Kearns discussed his Clerk's Office budget, he mentioned his desire to hire a grant writer, though that position was not funded under the the county executive's proposed budget. As an opening show-and-tell moment, he brought in a worn, handwritten court date book with an entry from 1901 for the court proceedings, guilty verdict and death sentence of Leon F. Czolgosz, the anarchist who assassinated President William McKinley. 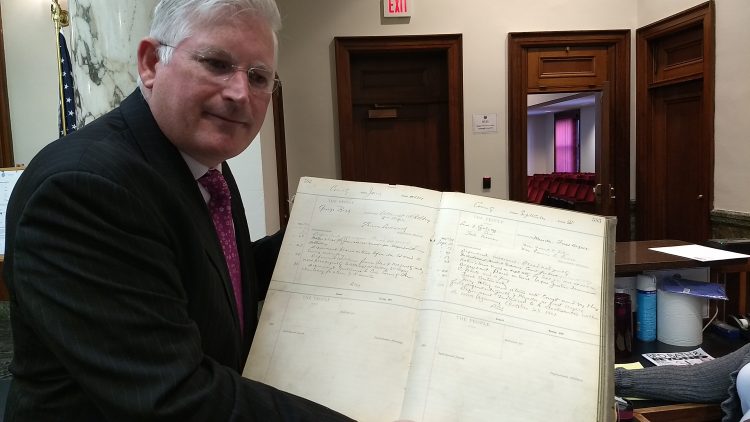 That court entry states that Czolgosz was "sentenced to be electrocuted with the week beginning Oct. 28, 1901." The line underneath simply states "Done."

Scary mail: District Attorney John Flynn said the DA's Office and the rest of the Erie County Courts building will soon need to construct a new mailroom to address potentially threatening or dangerous mail sent to the DA and other court officials. His comments come on the heels of a mail scare in July in which two inmates from Washington County sent inmate letters to Flynn threatening to blow up the courthouse and kill Flynn.

"They sent me two letters saying that they were going to kill me," he said.

The letters contained a white, powderlike substance that turned out to be shavings of Ivory soap, he said. The two inmates are being prosecuted.

Election inspector pay: Legislators expressed concern about the shortage of election inspectors. Elections commissioners said they currently pay inspectors $11 per hour. The inspectors, who work a long day on election and primary days, are sometimes not paid promptly and they deserve a raise, legislators said.

Parks personnel: Legislators generally praised the state of parks and did not object to the addition of several positions. But several raised objections to hiring a new deputy commissioner of recreation at a salary of $73,000. The new deputy commissioner's duties would include adding more park events and working with community partners. But those duties could either be handled by existing parks administrators or by a lower-level staffer who could be hired to do the work.

Overall, Poloncarz calls for increasing general fund spending by 3 percent. The tax rate would fall by 9 cents, but many residents may see higher tax bills because of higher property values. The county would raise an additional $8.9 million in property tax revenue overall. The budget proposal would keep the county under the state-imposed tax cap.