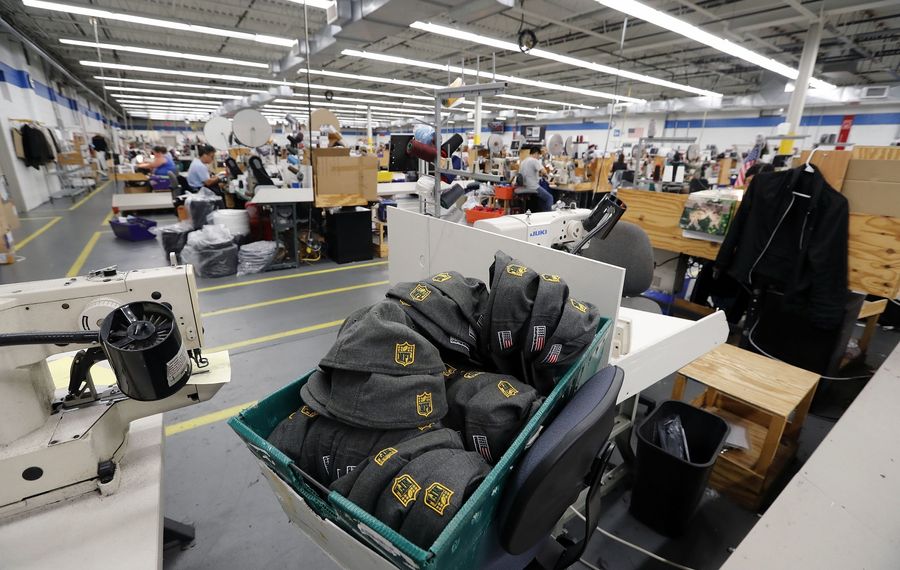 If you're going to make baseball caps, it seems appropriate that you would do so in a Lake Erie hamlet called Derby. And since the 1960s, inside a nondescript, white-and-gray building, hundreds of men and women have gone to work at New Era Cap to do just that.

But in March, just as another baseball season is about to get underway, New Era's presence in Derby will go away.

The company announced on Tuesday that it is shutting down that plant. Nearly all of its 219 workers, who come from as close as the neighborhood around the corner and as far as Burma and Vietnam, will be jobless.

“It’s just very devastating to the workers at the plant and in the community,” said Erin Bowie, a Communications Workers of America staff representative in Buffalo. “We have a lot of people who have worked there: Long-term workers for over 40 years, families that work there, people who work there that that is the only job they’ve held.”

The CWA Local 14177 represents 192 of the workers in Derby, which is New Era’s only headwear-manufacturing facility in the United States. It produces between 2 million and 4.5 million caps a year, which includes all of the headwear worn on-field by Major League Baseball players.

Most of that work will shift to third-party manufacturers overseas. A sliver of it – the caps worn by Major League players – will land in Miami, where New Era owns a plant that does screen-printing of apparel. That’s because New Era’s deal to be the exclusive on-field headwear provider for Major League Baseball requires that those caps be made in America.

Sending that work to Miami satisfies that provision. Shifting the rest of the work to third-party manufacturers in places like China, Vietnam, Bangladesh and Haiti, where more than 60 million pieces of New Era headwear already are being made each year, satisfies a key business strategy: New Era, which turns 100 in 2020, is getting mostly out of the manufacturing business. 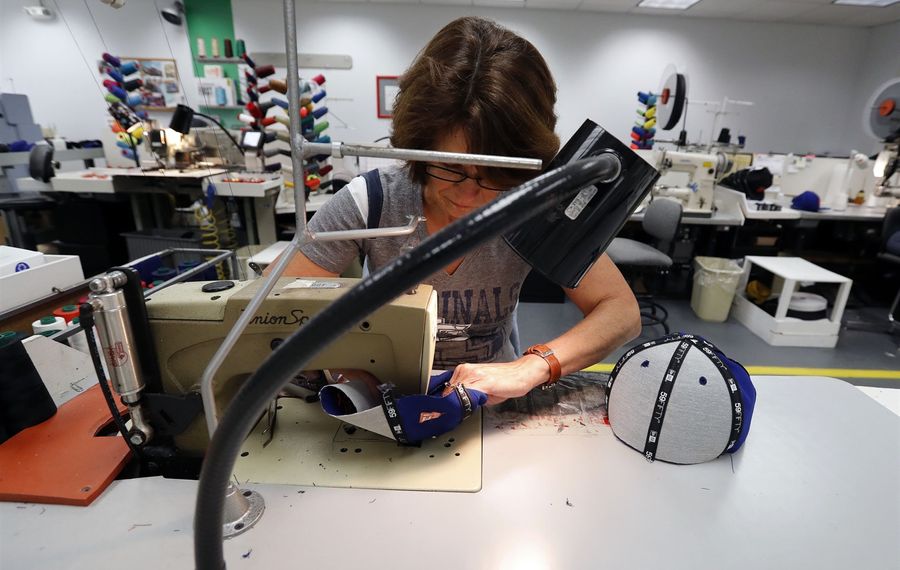 Company officials, who asked not to be named, told The Buffalo News that the closure of the Derby plant represents a “pivot” in New Era’s business model. For the first seven decades of the company’s existence, New Era was a manufacturer — a hatmaker that sold caps to baseball teams, and also to the United States Navy, which bought caps for its sailors.

In 1993, the company signed its exclusive pact with Major League Baseball. That was a business coup. Next came a pop culture coup: A few years into that deal, film director Spike Lee called New Era CEO Chris Koch, whose great-grandfather founded the company in 1920, and asked for a custom-made red New York Yankees cap.

Koch obliged, and the advent of that red Yankees cap set off a demand that led to New Era caps popping up in music videos, television shows, movies and more. By the turn of the millennium, New Era was on its way to becoming a fashion brand.

Over the last decade the company, which employs 337 people at its downtown Buffalo headquarters and 1,400 workers globally, has focused intensely on design, marketing and branding. Along with its license as the on-field headwear provider for Major League Baseball through 2030, New Era has an exclusive deal with the NBA through 2025 and a multiyear pact with the NFL, which is in talks for an extension.

The company officials who spoke to The News said New Era is shifting more focus to social marketing, e-commerce and quick turnaround times for customer orders. They expect that orders will be shifted around their global supply chain – “from whomever can make it,” one said. In that context, they said, a plant with a fixed capacity and a single product line – baseball caps – was no longer viable.

Though New Era officials were not willing to speak on record after the announcement, a survey of company milestones and executive interviews over the last several years illustrate a company that has been deliberately shifting into a highly visible, lifestyle-brand mode while shedding its manufacturing roots.

One decade ago, for example, New Era closed its unionized manufacturing and warehousing operations in Alabama while also acquiring the Miami-based 5th & Ocean, which helped the company expand from headwear to apparel. In the years since, New Era’s global reach has broadened and the company has built a strong market for both clothing and accessories abroad, especially in Asia. At least one-third of New Era’s approximately $750 million in annual revenues come from international sales.

To understand New Era’s shift from hatmaker to tastemaker, consider this scene from nearly two years ago in the company’s headquarters: Lindsey Koch, the wife of CEO Chris Koch, sat with her small staff in a conference room. It was a January afternoon, a couple of weeks before the Super Bowl.

Koch, the self-described “New Era first lady,” and her team were strategizing on how to get actor Will Smith to show up at the company’s Friday night “Planet New Era” bash.

A similar strategy worked one year earlier, when New Era booked model Hailey Baldwin for a party, suspecting – successfully – that her beau Justin Bieber would show up, too. (It didn't work with Will Smith, though.)

New Era has freely spent money on marketing. That includes lavish parties at all-star and championship games. It also includes naming rights to the Buffalo Bills’ stadium, which became New Era Field in August 2016 for a reported $5 million to $7 million annually over seven years.

“We should spend most of our free-thinking time talking about how we develop this brand, and great products, and great marketing,” said Paul McAdam, the executive in charge of New Era’s North American operations, in an interview with The Buffalo News earlier this year. McAdam is the former North America CEO of AllSaints.

“For me,” he said, “the cultural change was to have people really spend most of the day talking about those things.” 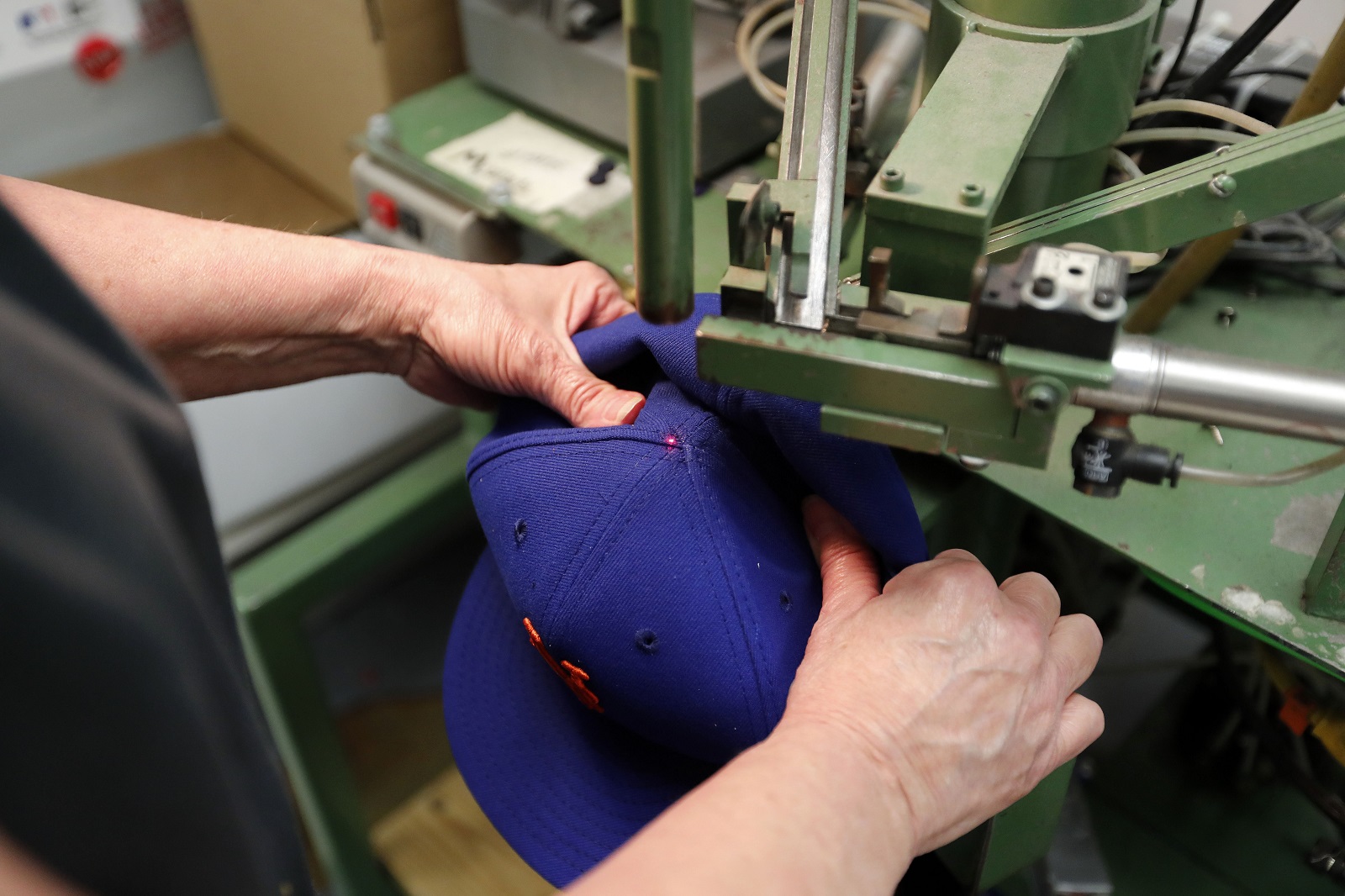 Flex team member Gayle Zabana attaches the button on the top of a cap at the New Era factory in Derby in 2017. (Mark Mulville/News file photo)

While there were regular union meetings in Derby about work fluctuations, and many workers expected layoffs or cuts, the decision to close the plant came as a shock.

“We knew work was slow and everything, but we thought they would downsize,” said one worker, in tears Tuesday morning as she headed to her car. “We didn’t think they would close."

Company officials disputed the notion that New Era is closing a more costly unionized plant in favor of shifting work to Miami, where its 120 workers are not unionized. New Era also closed unionized operations in Alabama a decade ago. They also noted that the decision was not affected by tariffs between the U.S. and China, even though Chris Koch spoke out recently against them. Discussion of closing the plant, they said, began before President Trump enacted tariffs.

Technically, New Era’s collective bargaining agreement with the CWA Local 14177 requires the company to inform the union that it is considering closure of the plant. In the coming weeks, the company and union will hold discussions, though the New Era officials contacted for this story offered no indication that anything other than closure is imminent.

In its release, the company said, “New Era is prepared to offer the affected employees benefits and severance at levels beyond what is required in the current agreement.”

Still, many of those workers will have a hard time landing new work that pays well. Some can’t speak English; they learn a task by observing, and there aren’t a lot of manufacturing jobs available to them. Others have a specific skill – sewing, for example – that may not be easily transferable to other positions.

Chris Koch began working at the Derby facility as a young man. He did not grant interviews on Tuesday, but released a statement.

“This is extremely difficult for me,” Koch said in a statement Tuesday morning. “I grew up in Derby and worked in the facility, which has had a long, productive history with the company. Even as other sports apparel brands moved away from running their own manufacturing plants, we continued making caps at our facility in Derby. But I have an obligation to our employees, partners and customers to ensure the long-term success of this company, and we need to keep pace with changes in our industry.”

During a Buffalo News interview two years ago, Koch reminisced about the old New Era, pre-Spike Lee phone call that spiked the company into the upper echelons of popular culture.

“We were a manufacturer,” Koch said. “We weren’t a brand. We manufactured caps that people wore when they play baseball. That’s really what it was. It was a different mentality.”

Not anymore, or at least not for much longer.