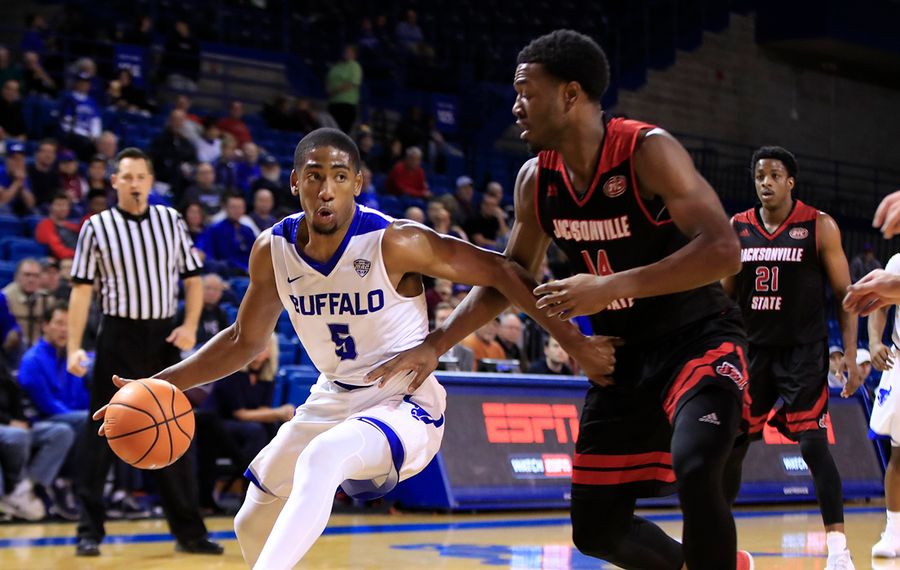 Paul Vecchio saw first-hand the number of lopsided losses the University at Buffalo men’s basketball team took in its first years as a MAC program.

On Monday, Vecchio was among many in college athletics who saw UB basketball make history. The Bulls (2-0) entered the Associated Press Top 25 poll for the first time, three days after a 99-94 overtime win at then-No. 13 West Virginia.

“For all of us that were a part of that, it’s really rewarding to see,” said Vecchio, who is in his seventh year as Alfred University’s athletic director.

“When I was there, we saw the MAC as a conference that, eventually, we could compete in, and win and become a powerhouse in competition. It’s taken probably 20 years, across the board, what UB (athletics) is doing, but I’m especially impressed with what has happened in the last three to five years.”

"It's a great feat for the players here, and the players that have been here in the past that helped build this," Bulls coach Nate Oats said Monday from Carbondale, Ill. "If we'd hadn't have beaten Arizona last year, I don't think people would be talking about us like they are this year, so it's a tribute to the players we've got on this team and in the past, that have put us in a position to where people all over the country recognize how hard-playing we are, and what we've been able to accomplish."

UB’s rise to a national ranking isn’t an overnight success or the result of one win against a perennial NCAA Tournament contender. In his sixth year with the program, Oats points to the influence of former UB coach Bobby Hurley, who led the Bulls to their first NCAA Tournament berths in 2015 and 2016. Oats coached the Bulls to a first-round win against Arizona in March.

"We really got this thing going in the right direction,” Oats said of Hurley’s tenure. “We were able to make the NCAA Tournament for the first time in school history and coach Hurley really jump-started this program, from where he took it over, and then we were able to build off that momentum and go back  to the NCAA Tournament, two out of those next three years.”

“This year, there’s a lot of respect for our basketball program, for what they did and what they were able to accomplish last year,” Alnutt said. “Then, you beat No. 13 West Virginia at their own place, and that sent shock waves, so to speak, to define that what happened last year wasn’t a fluke.”

“It’s a great reflection of our athletic department and our university. Another avenue to get our school out there and to be very existent, in a national way.”

“We’re so proud of those guys, especially how they finished against West Virginia,” UB quarterback Tyree Jackson said. “It’s exciting. We’re very happy for those guys, and it’s making us more hungry. We’ve got to go out there and continue to play and do better and do our thing, because the basketball team is really setting the bar. They’ve been setting the bar since last year, at March Madness. It’s awesome to see those guys succeed, and it’s definitely pushing us.”

In less than nine months at UB, Alnutt has noticed a buzz surrounding the athletic program. The men’s basketball team is ranked and the football team received 56 votes for the Associated Press Top-25 poll, good for 29th. But one thing he has emphasized to his athletic department, which is in the midst of an unprecedented run, is that a short stretch of success isn’t the final product of the work.

“Our football program set the tone, and the athletic department and the university rallied behind them and became a part of this run,” Alnutt said “Now, when you transition to winter, they want to carry that torch. The attitude and morale is high right now.”

“It’s a good feeling. But we can’t become complacent.”

Oats is also clear that with his team in new territory, the Bulls need to take on a similar mindset as they prepare for a nonconference schedule that includes road games Dec. 18 at Syracuse and Dec. 21 at Marquette, and a MAC schedule that opens Jan. 4 at Eastern Michigan.

"We knew we were going to get everybody's best shot going in,” Oats said. “Now, it's taken to another level with the top 25 ranking. All it does is make us better. I told them, we can use this as a positive or a negative. The negative, we let it go to our heads and we don't play as hard because we're in the top 25.

“The positive, and this is where we need to take it from, is that we know we're getting everybody's A-plus game now, and we're going to have to raise our level of play to play to an entire new level. Let's do it. It's going to make us better."