James Ernst and Sarah Sendlbeck have big plans for the vacant space two doors from their plant-based restaurant, Root & Bloom.

The restaurant owners will open Kind of a Creamery, a scoop shop for plant-based "ice cream," at 425 Elmwood Ave., with February as the target for opening. Expect 1970s decor, a wall mural and no seating.

The concept of the scoop shop will mimic that of Root & Bloom's restaurant, with products that fit the plant-based lifestyle Ernst and his wife have adopted for the past seven years. Kind of a Creamery's ice cream will be free of any animal products, and several gluten-free, soy-free and even low-sugar options are expected to grace the menu.

"We've always felt Buffalo has an amazing vegan community," Ernst said, "and by creating Root & Bloom we thought more options would be a good thing. We thought it would just be seasonal, but people have come in droves, and now it's something we're going to commit to."

With Elma-based Elmhurst Milked -- central to Root & Bloom's lattes -- providing the product's base, Kind of a Creamery will offer staple hard ice-cream flavors such as vanilla, chocolate and strawberry, as well as six or seven specialty flavors that will rotate on a monthly -- or even faster -- basis. 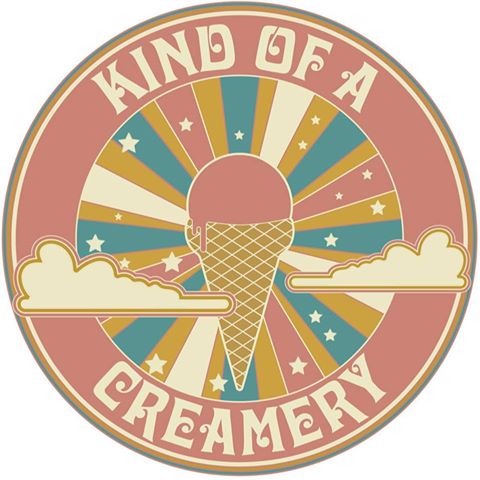 Kind of a Creamery's new logo. (via Ernst)

While other flavors will be unveiled in January, Ernst did tease edible glitter -- a '70s tie-in -- as a reason for excitement.

"We want to invoke the ice cream shop feel," Ernst explained, "but also bring something definitely unique and different." He expects the hard ice cream approach to set Kind of a Creamery apart from other local establishments that serve soft-serve vegan ice cream, which tends to be more watery with less of a "lush" flavor.

The milkshakes that have become popular at the parent restaurant will be offered at Kind of a Creamery, too.

Buffalo's first plant-based restaurant, Root & Bloom opened in May inside a gazebo, hidden from view on Elmwood, before moving into its renovated indoor space at 423 Elmwood Ave. on Oct. 17.

Just a month before the transition, the restaurant was the destination for New York Times contributor Charu Suri, who wrote at length about Ernst and Sendlbeck's pop-up dinners, adventure to Joshua Tree National Park and intense local sourcing.

The News' Samantha Christmann visited Root & Bloom back in June, sampling several items from a menu that prefers plant-based to vegan in order to avoid preconceived notions of the dietary lifestyle. Nachos topped with quinoa "meat" and a trio of jackfruit sliders were among the standout dishes from her visit.

425 Elmwood Ave. was previously home to a Boost Mobile location, Contour Cuts, Jewel Salon and a laundromat over the last several years.