ALBANY – As Republicans fretted last week over the string of Election Day losses that flipped the state Senate to Democratic Party control, they might seek solace in a not-so-small dose of reality.

The Republicans should have lost the Senate at least 10 years ago and, in fact, probably a lot longer ago than that were it not for the state's arcane way of determining how legislative seats are drawn.

Thanks to the state redistricting system – one of the nation’s most adept at gerrymandering and protecting parties –  the Senate GOP decade after decade aggressively re-drew Senate district lines in ways meant solely to protect their power in the Senate.

“Redistricting was the one tool that the Republicans could use to maintain the majority, and it was used effectively," said Nick Spano, a lobbyist and a former longtime Senate Republican from Yonkers who went through three redistricting rounds during his time in the Legislature.

Once every 10 years, Senate Republicans – and Democrats in the Assembly – take the numbers from the decennial census and, as required by law, re-draw district boundaries as a means to accommodate population shifts.

But the process, called redistricting, has been all about majority and incumbency protection. Or, more precisely, Republican protection in the Senate and Democratic expansion in the Assembly, where that party holds more than two-thirds of the chamber in what critics say is now a permanent majority thanks to redistricting.

In the Senate, Republicans turned to the process in a desperate attempt to try to hang on in the face of rising numbers of registered Democratic voters and declining numbers of GOP voters. So every 10 years, over the howls of government watchdog groups, Senate Republicans and their map-making experts zigged and zagged their way through New York State to devise some of the most puzzling looking districts that stretched the constitution's notions of "compact" and "contiguous" districts.

A GOP district that included Buffalo was connected to Republican-favoring suburbs via a spit of land along Lake Erie so narrow you could throw a baseball across it. It was drawn in 2012 for then-GOP senator Mark Grisanti, who today is a judge. Last week, Chris Jacobs, a Republican, won re-election to the seat.

A district just east of Buffalo was re-drawn to pump more GOP voters into a nearby district held by a Republican. The new district was stretched so far east that it ended up in neighborhoods in south Rochester.

There have been incumbent-friendly communities that found themselves connected – for district-shaping purposes – by spits of sand that disappear at high tide.

On Long Island, where the GOP suffered its most stunning set of losses last week, the Republicans faced an especially tough redistricting assignment as they saw their constituent ranks decrease, in part because of Democrats leaving nearby New York City to live in the suburbs.

Their task in places such as Nassau County became to slice and dice some Democratic neighborhoods, mostly racial minority ones, and spread them around more than one GOP Senate district as a way of blunting the concentration of Democratic voting power.

It worked well over the decades. But it ended Tuesday, when even gerrymandered lines could no longer protect Republicans from losing enough seats that Democrats will have a large majority to take over the Senate.

Republicans did not shy away from the obvious answer when asked late last week if redistricting helped the GOP keep its Senate power base. “Absolutely it has over the years … In a very blue state, it’s very hard for the Republicans to hold a majority of the state Senate but for the redistricting process," said Edward Cox, the state Republican Party chairman.

At a business group gathering in Westchester County prior to the elections, Cox told the audience that the Senate would remain in Republican hands “because Mike Nozzolio drew the lines."

The GOP plan in 2012 added another Senate seat in upstate, despite lagging population numbers. Ten years earlier, the GOP increased the Senate from 61 to 62 seats.

Skelos, sentenced last month to 51 months in prison for his role in a corruption scheme, declined to comment and Nozzolio, now a lawyer in private practice, did not return calls.

“They certainly were shameless about using the redistricting process," said Sen. Michael Gianaris, a Queens Democrat who ran the Democrats’ successful campaign that saw its conference grow from 31 to 39 seats in the 63-member chamber.

Spano, the senator-turned-lobbyist, recalled 2002 when fellow Republicans eroded his GOP constituent numbers by moving voters from his district into one held by a nearby GOP senator in the Bronx. “They took away one of my best towns from me and we ended up losing both seats," Spano recalled.

“The demographic changes you saw, particularly in the suburbs, were so profound that it was impossible for someone like me, a moderate Republican, to win an election in a district that became overwhelmingly Democratic in registration. It’s no secret why my brother is a Democrat as the mayor of Yonkers," Spano said of Mayor Mike Spano, a former Republican who became a Democrat.

Stewart-Cousins, about to become the most powerful woman in state government, recalled how her first Senate district was rectangular in shape and contained one city. “It was a normal looking district,’’ she said. In 2012, that all changed. “It is the smiling profile of an old man with a scraggly beard," she said of her Senate 35th District's shape.

The change, which now has her representing parts of three cities, was done by Senate Republicans to shove more Democrats into her district in order to give an adjoining district more Republican voters.

Governors complain about redistricting, but seldom do much about it. In 1992, Gov. Mario Cuomo approved Senate lines that minorities described as racist in some areas. In 2012, his son, Gov. Andrew M. Cuomo, after vowing an independent redistricting process, approved a Senate GOP plan that let the chamber grow by another seat.

Roman Hedges was the redistricting expert for decades with the Assembly. A former college professor, Hedges, now retired, said the redistricting powers of the Senate Republicans can be traced to the 1894 constitutional convention in New York that was dominated by GOP delegates. 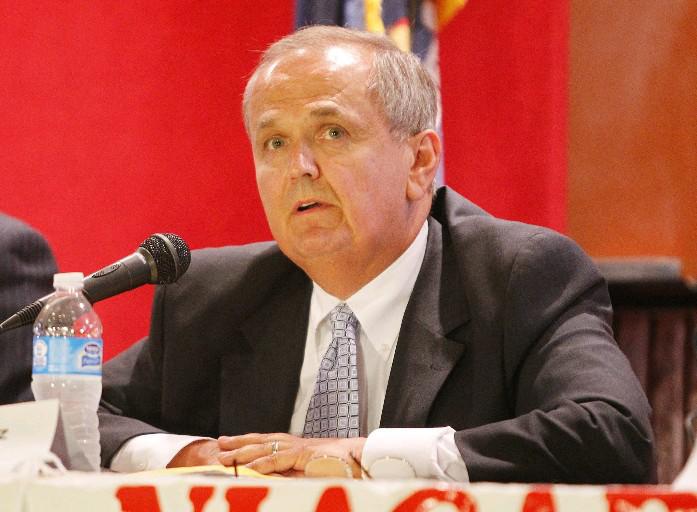 Former state Sen. George D. Maziarz said about redistricting: “It works for the party that’s drawing the lines. It certainly worked for us in the Senate." (Mark Mulville/News file photo)

It was a gathering in which fears about Democrats getting control of the state's political structure were prominent, he said, and so the convention produced changes to the constitution that still help guide redistricting to this day. They included such things as permitting cities to be divided into multiple districts but generally required Senate districts to represent whole towns.

“It allowed Democratic areas to be cut up (during redistricting) and Republican areas to be kept whole. That was the plan and it worked. That’s why they dominated all that time,’’ Hedges said.

Changes came over time, like “one person, one vote” court decisions in the 1960s that changed how county lines can be treated in redistricting.

Hedges said the Senate plans, like adding two extra seats to the chamber in the last 20 years, helped the GOP delay the inevitable. But, he said, as Democratic enrollment expanded and the party got stronger candidates, many of whom were self-nominated, the built-in advantages of redistricting were eroding for the Republicans.

“All of a sudden, it was not an advantage, and now maybe the advantage went the other way," he said of old geographic rules the Senate GOP applied to redistricting.

Of the 1890s constitutional changes, he said, “They were fundamentally anti-New York City political response to Democrats and immigrants getting control of the city, and fear that they were going to get control of the state."

Republicans say redistricting is the sledgehammer Democrats used to boost their numbers in the Assembly. “I think it works both ways," said George Maziarz, a former Senate Republican from Niagara County.

“It works for the party that’s drawing the lines. It certainly worked for us in the Senate," Maziarz said of redistricting’s help in keeping the GOP in power all these decades.

But now there's another problem looming for the GOP: 2022. That's when Democrats, given their new strong majority and demographics in their favor, are likely to be in charge of the next redistricting round. Already, Democrats are privately telling Republicans they expect to draw at least 40 “safe” Democratic seats – keeping the party in control for decades to come.