Nathan McMurray made the kind of mistake rookie candidates make. The law required the Democratic challenger to Republican Rep. Chris Collins of Clarence to file a report spelling out his finances by May 15. In fact, he never did it until August.

A campaign consultant, Robert Dempsey, said he urged him to file it back in the spring.  And before long, McMurray stopped answering Dempsey's emails and texts.

"He went dark on me," recalled Dempsey, a Buffalo native.

Dempsey left the McMurray campaign at about that time, and that was nothing unusual. In its 11 months of existence, the McMurray campaign employed four campaign managers and at least 17 consultants performing various tasks, federal records show. People intimately familiar with McMurray's effort said political pros came and left, sometimes voluntarily and sometimes not.

Many left frustrated with the candidate's reluctance to raise money, stick to a schedule and take advice. McMurray himself acknowledged in an interview that he never settled on a team he trusted until the campaign's final weeks.

Coincidentally or not, McMurray fell a percentage point short of Collins on Election Night despite the incumbent's arrest on felony insider trading charges three months earlier.

"The campaign suffered from a lack of professional help from the beginning," said a Buffalo-based political operative who asked that his name not be cited in this story, but who echoed the thoughts of several other sources. "Nate is a great guy who pretty much ran his own campaign."

A reluctance to fundraise

McMurray proved to be a gifted candidate. Smart, witty and charismatic, he attracted hundreds to his rallies and thousands to his Twitter feed. In the process he built a volunteer army unlike any that's been seen in a local congressional race for years.

The Grand Island town supervisor, McMurray entered the race for Congress early this year and quickly won over party leaders and grassroots activists.

"Nate just has a dynamic personality," Michael Plitt, the Democratic chairman in Genesee County, said back in May.

But according to several people who did work for McMurray's campaign and others who kept a close eye on it, he proved to be a less than gifted campaign operative – especially when it came to fundraising.

That quickly became obvious. He raised only $41,786 in the first quarter to go up against Collins' $1.27 million war chest.

McMurray acknowledged at the time that he hated asking people for money.

"It's something that does not come naturally to me, or to anybody who's normal," he said.

People close to his campaign said he never got over his aversion to raising money. After Collins' indictment, he hired Nicole Hushla Re – a longtime aide to Lt. Gov. Kathy Hochul – to take charge of his fundraising. She won praise from McMurray and other Democrats for quickly raising more than $500,000. 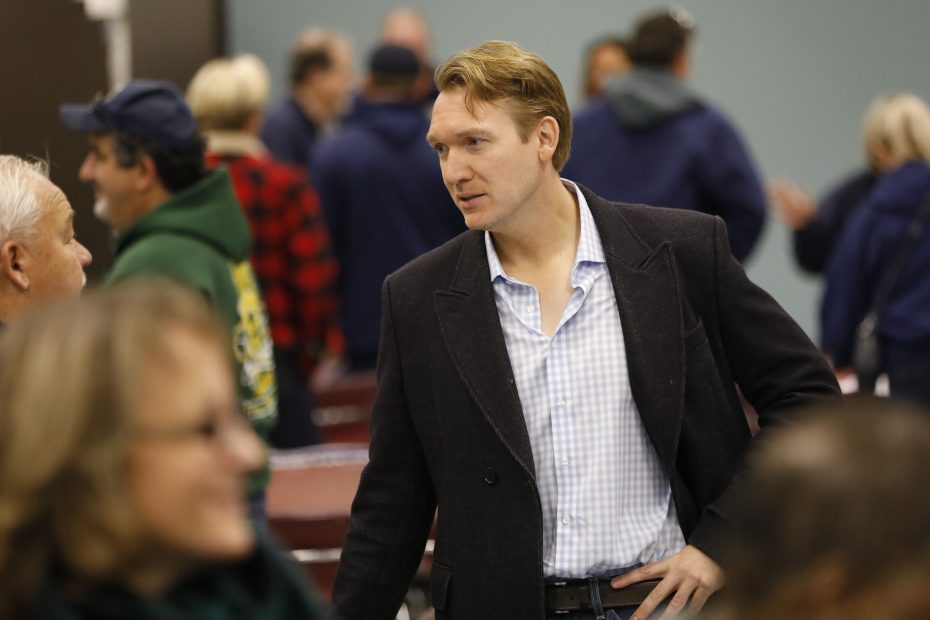 Nate McMurray mingles with political volunteers at the UAW Region 9 Union Hall in Amherst Oct. 20. Early in the campaign he said he hated asking people for money – "it's something that does not come naturally to me" – and people close to his campaign said he never got over his aversion to raising money. (Derek Gee/Buffalo News)

But people who worked with McMurray earlier in his campaign said he could have done much better if he had tried harder.

"He could have raised millions after Collins' indictment," said a former McMurray consultant. "But he wouldn't follow professional guidance."

McMurray loved to campaign, and he spent many days on the road with Matt Dearing, the trusted young aide who served as the second of his four campaign managers. Together they would go to house parties and Democratic events and summer festivals, winning votes one by one.

But some Democrats fretted that he campaigned where he wanted to and when he wanted to, without enough thought given to where his presence would win him the most votes.

"I wasn't sure that he went to enough of the chambers of commerce, the Rotary Clubs," said former Rep. John J. LaFalce, a Tonawanda Democrat and strong McMurray supporter.

Doing that, LaFalce said, would have put McMurray in contact with more influential Republicans and Independents – the kind of voters he would need to win in a district with 40,000 more Republicans than Democrats.

Only later in the race did the campaign adopt a strategy for getting the votes the campaign needed from each of the district's eight counties, McMurray acknowledged in an interview Friday.

Ironically, Dempsey – the former campaign consultant – said he developed a strategy in the spring that set the number of votes McMurray would need to win in each of the district's counties, but McMurray ignored it.

Other observers questioned the campaign's advertising strategy. McMurray took to the airwaves weeks after Collins did. And while spending most of its ad dollars in Buffalo and Rochester, the campaign also bought nearly $16,000 of cable airtime in Elmira, a faraway media market that serves only a sliver of the 27th congressional district in southeastern Ontario County.

McMurray defended that ad buy, noting that he won a lot of votes in that part of the district. But other political pros privately questioned it, seeing it as a sign that the McMurray campaign lacked direction and focus.

"Nate was all about tactics, and a lot of them worked," said Dempsey, who went on to work on several Democratic House campaigns in California. "But there was no strategy whatsoever."

Conflict behind the scenes

McMurray and Dempsey disagreed on the nature of their falling-out. McMurray said he just didn't like the work that Dempsey was doing remotely from his base in California. Dempsey said McMurray simply rejected his advice and stopped contacting him.

But the conflict between McMurray and Dempsey proved to be emblematic of a campaign where the candidate clashed repeatedly with those who were supposed to help him.

Perhaps most importantly, McMurray appeared to have a fraught relationship with the Democratic Congressional Campaign Committee, the party fundraising arm that helps House candidates.

Told what McMurray said, the DCCC countered with a terse statement.

That aid came, though, in the campaign's closing weeks. Political sources in both Buffalo and Washington said the DCCC was cautious about aiding McMurray because of the huge enrollment edge that Republicans have in the district. That would mean that if he were to win this year, the committee would have to spend much more on his re-election race in 2020, when he would be likely to have a challenger who is not under criminal indictment.

Sources in both Buffalo and Washington said Victoria Dillon, whom McMurray hired to run the campaign in August, helped prod the DCCC to invest in McMurray's race. That's one reason they were surprised that Dillon left the campaign about two weeks before it ended.

McMurray and Dillon – a longtime aide to the late Rep. Louise Slaughter and two of President Obama's veterans secretaries – both declined to comment on her departure. But to one Democratic source intimately familiar with the campaign, her departure was standard fare for the McMurray campaign.

"It was never very clear who was in charge besides Nate," that source said.

McMurray acknowledged that he never trusted a lot of the political people who came to him seeking jobs and consulting gigs. He said he wishes the DCCC helped him find better people earlier.

"The number of people who actually have the experience, who can do this work, is limited," he said. "And by the time I got going, a lot of those people were already working on other races."

He said things changed in the last two weeks, when Hushla Re – the former Hochul aide – became campaign manager. With her at the top of his effort, McMurray finally settled on the team he liked. Both Dearing and Torin Rozzelle, a longtime media aide, remain, and they are "like family," McMurray said.

McMurray acknowledged that he learned a lot as a first-time candidate, but in general, he dismissed the criticism coming his way from former aides and other Democrats. Besides, with absentee ballots still to be counted, McMurray insisted he still might win.

"I have zero regrets," he said. "I did everything in my power to win – although I do have a regret that I did not have more of a support system."