Hotel Henry, which has drawn its share of accolades since opening on the Richardson Olmsted Campus in April 2017, is planning to expand.

The hotel's founder and president expects to enter into negotiations "in the next two to three years" to operate in two additional buildings to go with the three already occupied.

"We are significantly ahead of our projections," said Dennis Murphy, founder and president of InnVest Lodging Services. "We didn't think it would be as much of a hit so fast, and it has been.

The company also owns Mansion on Delaware Avenue and has interests in more than 20 hotels throughout the United States. It spent $16.6 million to build out the hotel, with $60 million spent by the state on infrastructural costs. The project also received $16.6 million in state and federal tax credits.

"The Richardson Center Campus is one of the finest examples of how historic preservation can also serve as a uniquely effective vehicle for economic growth," Driehaus said. "The plan to now expand the hotel underscores the truth that historic preservation is both a mater of aesthetics as well as a tool for community revitalization."

Visit Buffalo Niagara, Buffalo's tourism bureau, has been thrilled by the reaction to Hotel Henry and the Richardson Olmsted Campus.

"I took a lot of press through there over the years when it was basically a ruin, and there was a sense that the project seemed unattainable," said Ed Healy, Visit Buffalo Niagara's vice president of marketing.

"It's so spectacular and so beautiful that I find it to be genuinely moving as I take guests through there now," he said. "Visiting writers never fail to be impressed." 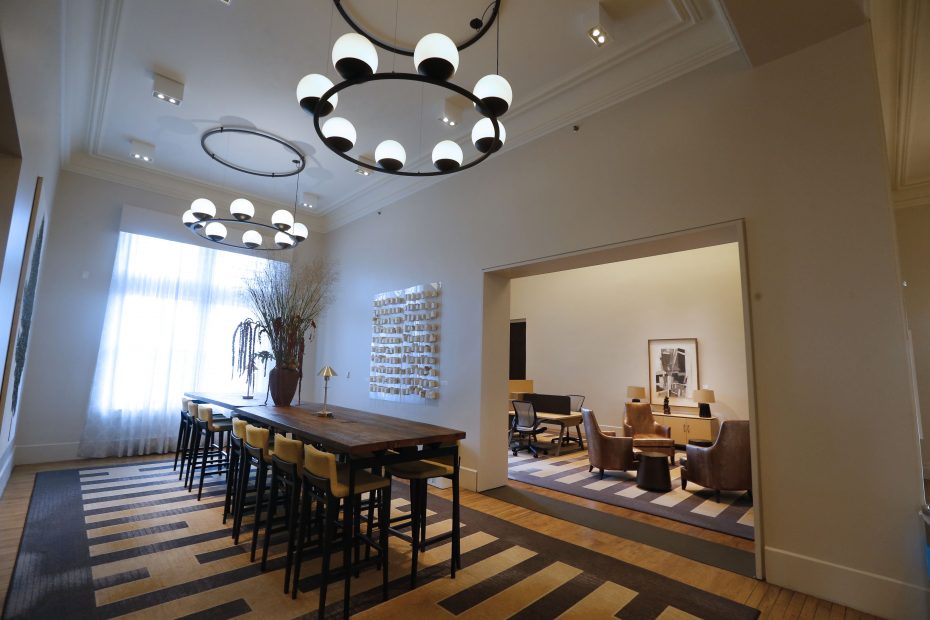 The second floor lobby is part of the 180,000 square feet of space in Hotel Henry, which is twice as much as in the typical hotel with the same number of rooms. (Robert Kirkham/Buffalo News)

The hotel's lease agreement in 2014 stipulated that the Richardson Center Corp., the state subsidiary that owns the land, and Hotel Henry would seek to see the hotel expand into two additional buildings, stretching the number of rooms from 88 to 124.

Murphy said with revenues 21 percent ahead of projections this year and 12 percent growth expected next year, that goal is drawing nearer.

The hotel's 100 Acres Restaurant has also exceeded expectations, he said.

The local community, Murphy said, has been quick to get behind the transformation of the onetime Buffalo State Asylum for the Insane designed by H.H. Richardson, considered one of the country's greatest architects.

"Our community has really embraced us," Murphy said. 'It has been way beyond expectations from a local standpoint."

The full-service hotel has quickly become a destination for myriad social and business events, such as weddings and awards-related galas.

The hotel also has become a place for local residents – as well as visiting friends or family members – to stay.

"I can't tell you how many people we have who come for a 'staycation,' " said Diana Principe, a partner with Hotel Henry. "It's a phenomenon we've seen at the Mansion on Delaware forever."

Principe said the hotelier is trying to change a more than century-old habit in which the property, as a state hospital, was generally off-limits to the surrounding community.

"You have the Elmwood Village, the West Side, Buffalo State and the museum corridor," Principe said. "No one came here, and now they can."

The hoteliers foresee their greatest growth coming in meetings and conferences. The sales team has a five-year plan to drum up business within a 250-mile radius.

Increasing that part of the business, Murphy said, is key to the hotel's long-term sustainability.

"The hotel's location around the corner from the Museum District and on the edge of Elmwood Village makes it really situated to maximize its potential," Murphy said.

While the hotel is proving more profitable at this juncture than expected, operating the cavernous space has also been more expensive than expected.

Some of that has to do with design and inefficiencies inherent in converting a former state hospital. Restrictions on modifying a National Historic Landmark also have posed a challenge, he said. 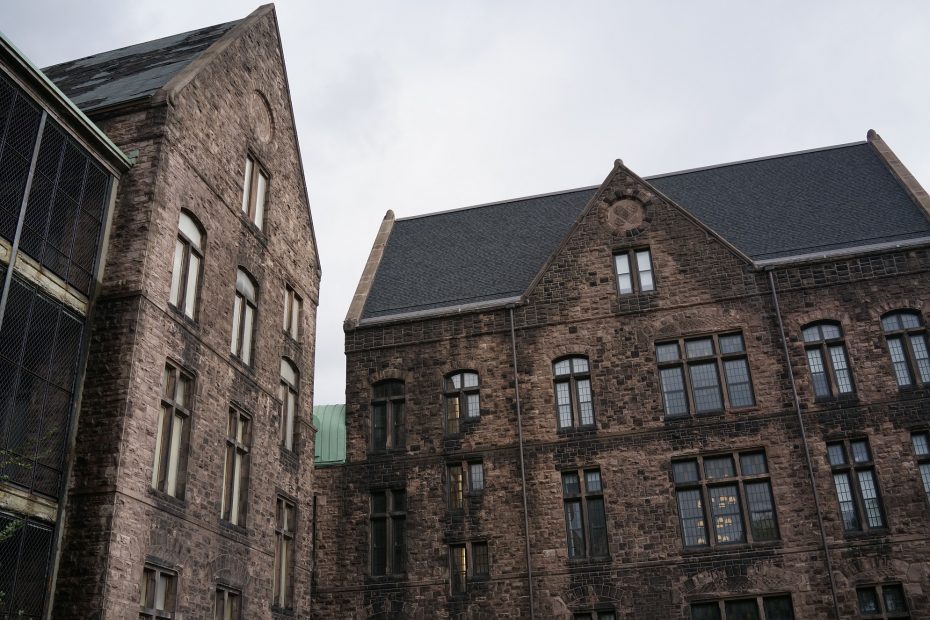 The newly developed Hotel Henry, right, is connected to an undeveloped building on the west wing of the Richardson Olmsted Campus. (Derek Gee/Buffalo News)

The 180,000 square feet of hotel space is twice the amount it would normally be if a traditional 88-room full-service hotel was built today, Murphy said.

That includes 2,800-square-foot halls and 14- to 20-foot ceilings in a building for which Flynn Battaglia Architects had to design 28 different room layouts, far beyond anything found in standard hotels.

Repairs are more costly, too.

"Ongoing maintenance is significantly higher," Murphy said. "A traditional hotel roof replacement might be $40,000 for us. With a slate roof, it could be in the hundreds of thousands of dollars."

InnVest Lodging Services is no stranger to historic projects.

It took the company 22 months to open the popular Mansion on Delaware Avenue, and 4½ years to open Hotel Henry's doors, Murphy said.

"There were literally hundreds of knowledgeable experts who were working on this virtually for the 4½ years to get it over the finish line," he said.

The Richardson Center Corp., created by the State of New York to oversee the Richardson's comeback, was key, he said.

The Richardson Center Corp. is currently negotiating with two local developers to use other buildings on the campus.

Mark Mortenson, executive director of the Richardson Center Corp., said Hotel Henry paved the way for future redevelopment by showing what was possible on the campus of 11 connected buildings.

"I think they were the right creative entity to partner with us on this endeavor," Mortenson said. "They have used the spaces so creatively. Other operators would have seen them as really difficult spaces. The hotel really embraces these spaces and uses them to their fullest potential.

"Because Hotel Henry really had to take a huge leap of faith, future tenants can actually see firsthand what can be," he said. 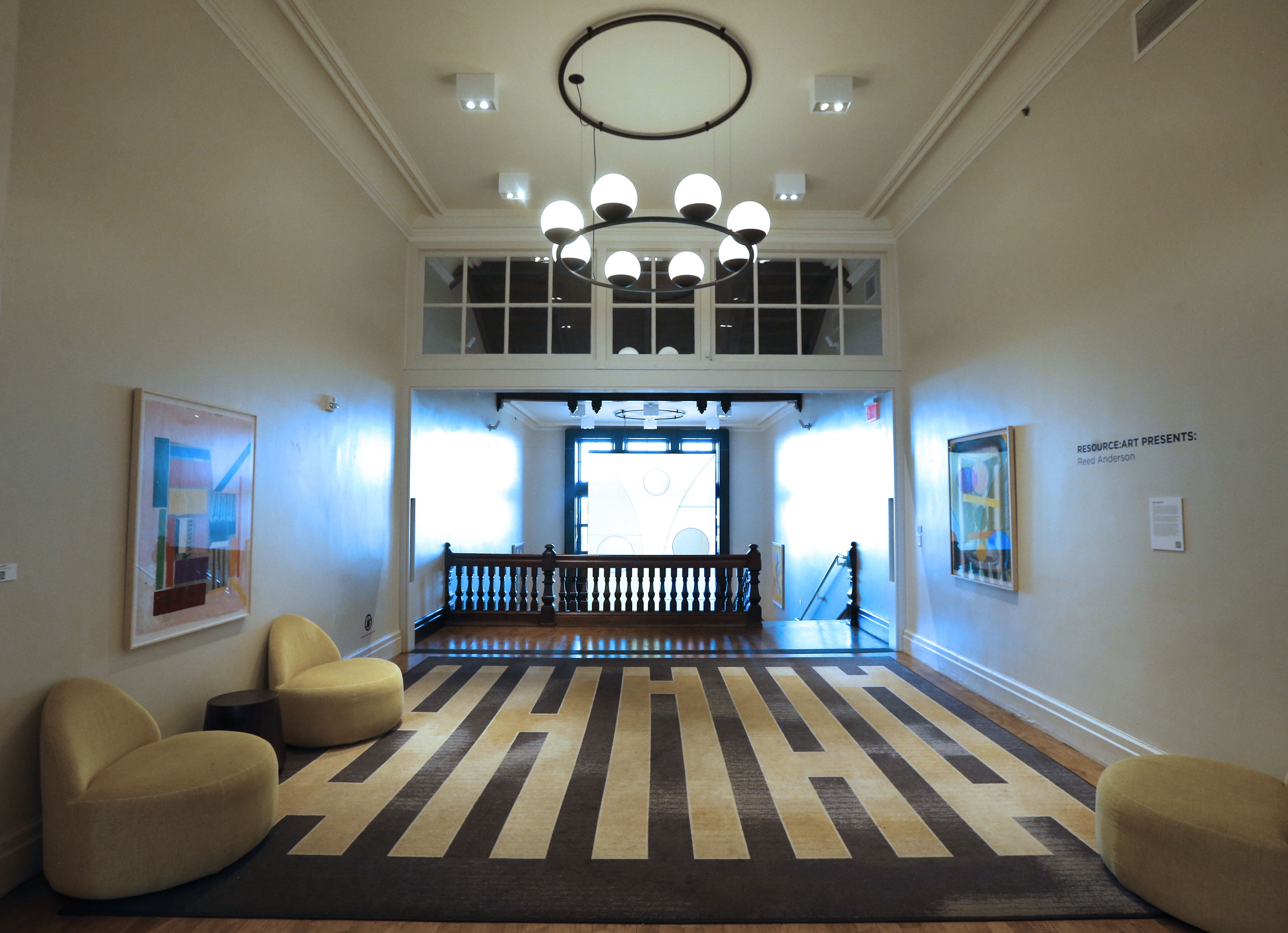 Carpeting on the second floor of Hotel Henry reminds visitors that they are in part of an H.H. Richardson-designed campus. (Robert Kirkham/Buffalo News)