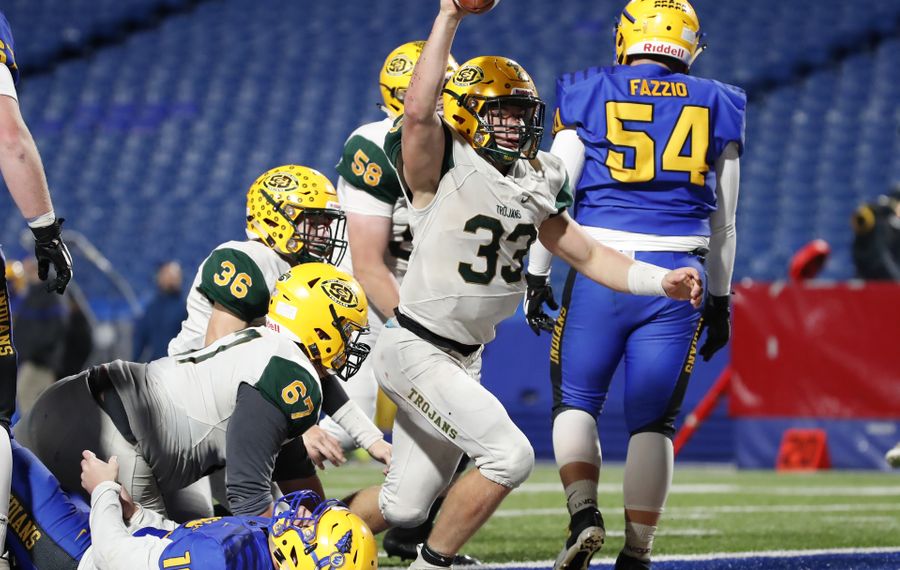 How they got here: West Seneca East ended rival West Seneca West’s reign as state champion and snapped the Indians’ 24-game winning streak by rallying for a 20-13 victory in the Section VI championship game. Dolac scored two fourth-quarter touchdowns, the second a 1-yard run with 2:29 left that broke a 13-13 tie. Dolac led a defense that limited West to just 17 second-half yards with 20 tackles. He led the Trojans’ ground-and-pound attack with 32 carries for 135 yards. He also caught a 17-yard touchdown. Speedy Devare Mathis returned a kickoff 73 yards for a touchdown.

June, the Reigning All-Greater Rochester Player of the Year, led Irondequoit to a 21-14 comeback win against Victor in the Section V championship game. June scored the winning touchdown on a 5-yard run with 5 seconds left, the second time this season he’s scored the game-winning TD in the closing seconds against Victor. June completed 7 of 18 passes for 112 yards and rushed 21 times for 72.

Pre-snap read: West Seneca East meet Freddy June. Irondequoit meet Shaun Dolac. On paper, this one figures to come down to which team can stop or at least contain the other’s top player the best.

Both like to get the ball into their respective star players’ hands, and Dolac and June generally have it at the start of every play because they usually line up under center.

West Seneca East is going to need to play its characteristic physical football and not get caught up in the moment of being in the state tournament for the first time. The offensive line, the unheralded stars of the Trojans, must assert itself in the trenches.

Irondequoit’s June has a knack for being clutch. He’ll get his yardage, but East must figure out a way to limit his impact on the outcome of this game.

What’s next: The winner advances to the state semifinal to face either III-Indian River or IV-Vestal at 8 p.m. Nov. 16 at Union-Endicott High School.