Luminaries of the literary world know Buffalo -- and Buffalo has come to know them.

In the process, the Babel literary series, presented by Just Buffalo Literary Center and now in its 12th season, has become one of the most prestigious author series in the country.

"Babel brings the best living writers on earth to Buffalo, which is a pretty stunning accomplishment," said Lorna Perez, an associate professor of English at SUNY Buffalo State, which buys a block of 100 tickets at each event for its Honors Program.

Sherry Robbins, a poet and teacher living in Amherst, is continually struck by the caliber of writers Babel brings.

"We can see the most famous writers in the world and learn about new ones right here in our hometown," Robbins said. "It's a gift."

Setting Babel apart is its singular focus on literary writers, often with an international or multicultural bent. That stands in contrast to most author series that typically combine fiction and non-fiction writers, including journalists, political writers, biographers and humorists.

The Kleinhans stage could be forgiven for sagging under the sheer weight of the authors' stature.

Fourteen of the 48 speakers, including those yet to appear this season, have received Guggenheim Fellowships. Seven more earned MacArthur Fellowships, known as "genius grants."

The latter honor includes Jesmyn Ward, the first woman and person of color to win the National Book Award twice. On Thursday, Ward will take her place in Babel's literary roll call of honor when she steps onto Kleinhans stage.

Celebrated writer of the South, Jesmyn Ward, coming to Buffalo for Babel series

Babel began in November 2007 with a focus on non-American literary authors of some critical reputation.

The series grew out of initial conversations between Michael Kelleher, then Just Buffalo's artistic director, and Jonathon Welch, proprietor of Talking Leaves Books.

The idea gained impetus after Just Buffalo's "If All of Buffalo Read the Same Book," featuring author Arundhati Roy, drew nearly 2,000 people for two events in 2004.

A three-year grant from the John R. Oishei Foundation provided the funding needed to get the project off the ground, and a partnership with Hallwalls Contemporary Arts Center helped secure a venue, Babeville's Asbury Hall.

The inaugural season began with Orhan Pamuk, a Turkish novelist and Nobel Prize winner. A capacity crowd of 875 people were on hand to see him. No fewer than 750 were present for the season's other three authors -- Ariel Dorfman, Derek Walcott and Kiran Desai.

"We thought if we could average 300 to 500 people at an event we'd consider it successful," Welch recalled. "It became pretty clear we underestimated." 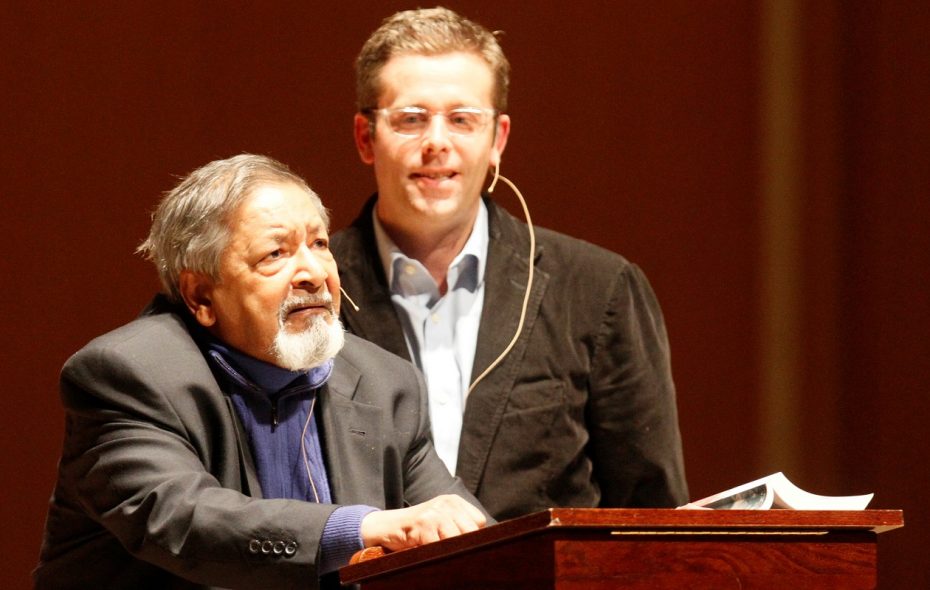 Kelleher said the authors were received like rock stars when he announced the upcoming season at the last event that year.

"I started with Chinua Achebe, and people in the audience started shrieking," Kelleher said. "I thought, 'OK, people are really into this.'

Kelleher announced that subscriptions would go on sale that night, and the entire second season sold out within a matter of weeks.

Babel moved to the larger Kleinhans, which holds 2,446 seats, in time for the season's last writer, Isabel Allende.

Fast forward to last year's series. The attendance was 6,805, Babel's highest total yet.

"It's one of the best cultural series that has ever been conceived here," Cardoni said.

Babel currently has a base audience of around 800, with another 400 to 500 drawn by a particular writer, said Kevin Thurston, Just Buffalo's communications coordinator.

The audience -- generally older, white and female -- has proven to be loyal.

Reader surveys earlier this year found nearly 60 percent of the audience was 55 and older, though that percentage can dip significantly depending on the author.

Bringing in writers like Patti Smith, Suzan-Lon Parks, Richard Blanco and Junot Diaz has helped bring a younger feel to the series.

"I think people who have never been to Babel imagine that it's this elitist, high-brow thing," said Barbara Cole, Just Buffalo's artistic director. "I've been picking up a pizza at Wegmans and the guy behind the counter says, 'Are you from Babel?' It's a more universal experience than some people realize."

No one is ever made to feel guilty for not knowing the author or their work, Thurston said.

"It's not like going to English 301, The American Novel, and feeling like you have to hide because you didn't read that week's book," he said. 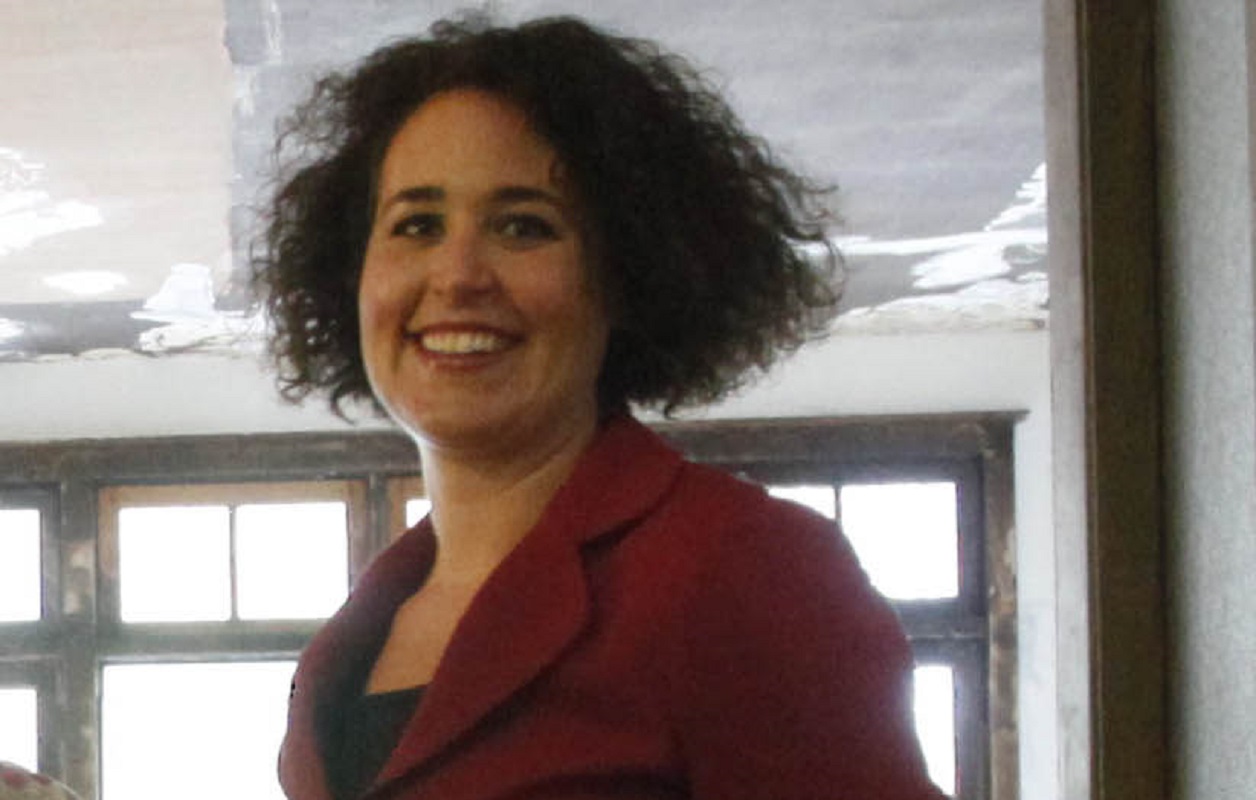 Cole has elected to continue the format developed by Kelleher, whom she succeeded as artistic director in spring 2012. She walks onto stage to make a 5- to 10-minute introduction, threading a needle of sorts, speaking both to the audience member who knows absolutely nothing about the author and someone who has read everything by them.

"One of the huge things we've learned is that people do not need to read the book beforehand," Cole said. "You could know absolutely nothing about the author, walk in and find it inspiring."

"They not only deepen our appreciation of the author's work, but stand on their own as great pieces of literary nonfiction," Toarmino said.

The format is for the author to deliver a conversational 45-minute lecture, followed by a conversation with Cole for 30 minutes. She asks questions of her own before moving on to ones collected from the audience and submitted on index cards.

"The writers on many occasions seem a little stunned and speechless by the introduction," Robbins said. "They seem genuinely appreciative and surprised at having been understood so well and so completely. It just sets the audience up for something exciting."

It was under Cole that Babel began, in 2014, to include American authors.

It was also when she felt the most nervous. Then it turned into the most fun, she said.

"I was just terrified, pretty much, for 11 months prior," Cole said. "But she was just so funny and so light, and in the moment."

Patti Smith, the rock musician and National Book Award winner who closed out the 2014-15 season, was another highlight.

"She performed music and just loosened up the whole format," Cole said. "It gave us permission to say it didn't need to be 100 percent strait-laced literary all the time."

Cole curates the series, often making decisions on who to book more than a year before the authors are announced.

Some writers are eliminated because they won't do both a lecture and answer audience's questions. One invitation was rescinded when a writer wouldn't do a student event, which is required. They also have to be willing to participate in a VIP event prior to going on stage. 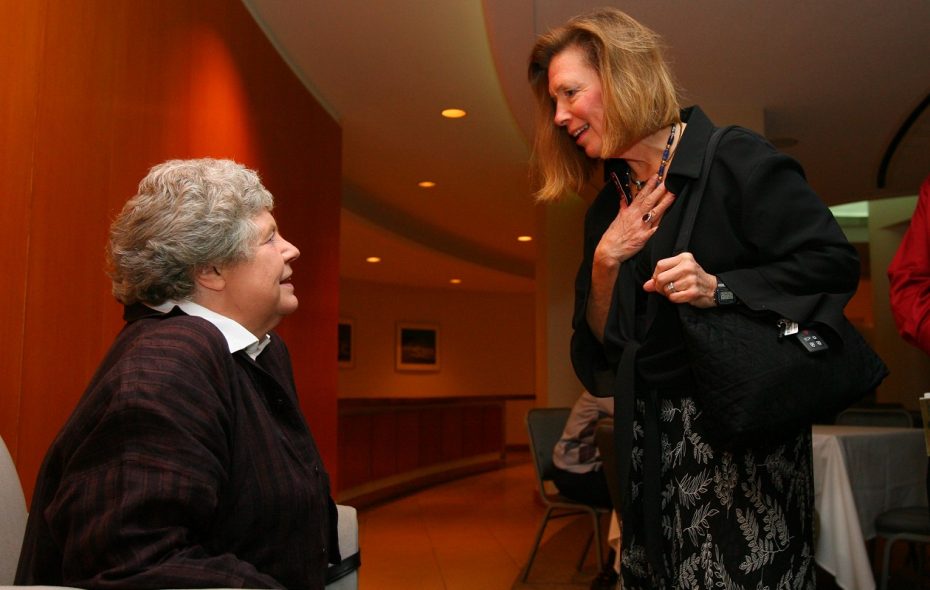 Author A.S. Byatt, left, is greeted at a VIP reception as part of the Babel Series. (News file photo)

Cost is also a concern in deciding who to book. Tickets only cover about one-third of Babel's costs.

That means a lot of time is spent seeking dollars from partners like the Community Foundation for Greater Buffalo and Buffalo & Erie County Public Library, or grants from the National Endowment for the Arts and the New York State Council on the Arts.

"There has been tremendous inflation with author prices," Cole said.

At the same time, ticket prices remain the same as they were in Year One. Student tickets are intentionally kept low at $10.

Sometimes, tickets are made available through Just Buffalo's ongoing relationship with the public library system.

The writers make an impression on the students, but the reverse is true, too, she said.

That was Viet Thanh Nguyen's experience when the 2016 Pulitzer Prize winner met with young people before his March appearance.

"The high school students who were writers were truly impressive—articulate, hopeful, idealistic, and doing things that I couldn’t have imagined doing at their age," Nguyen said. 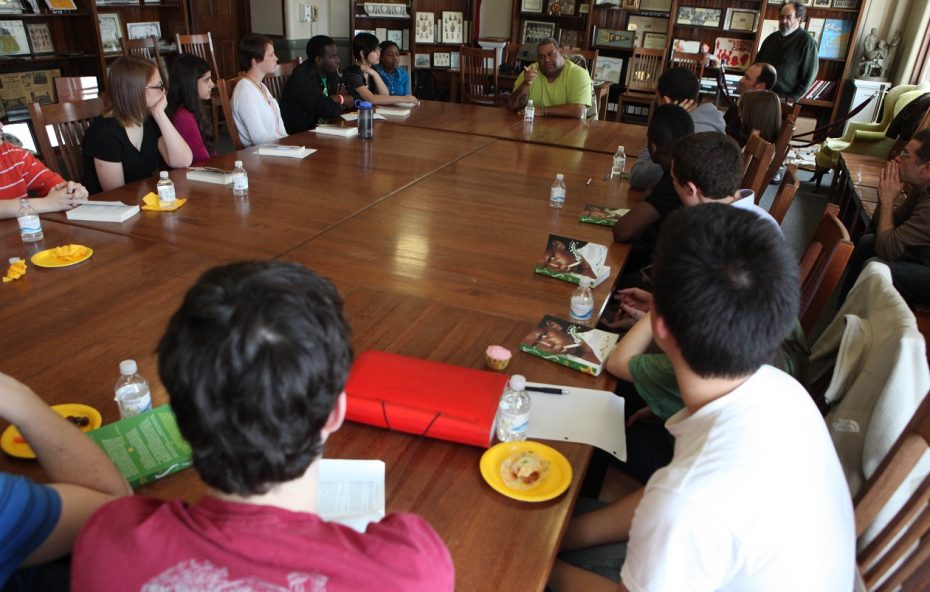 Author Chris Abani meeting with a group of City Honors students for a discussion on his book "GraceLand" during the 2010-11 Babel season. (Sharon Cantillon/Buffalo News)

Welch, of Talking Leaves, sells books at Babel events and is present during book signings. He is struck at how appreciative the audience is.

"The thank-yous the authors get from audience members is always astounding to me," Welch said. "I have been to thousands of poetry readings in my life, and none of them get the kind of positive responses and  sort of awe that this series does," he said.

The feeling from writers, Welch said, is reciprocal.

"I think, uniformly, that all the authors have left here with incredibly positive attitudes about both the city and its people," he said. "They will say to me something like, 'This is amazing,' or 'It's so wonderful,' and they're not saying it with any prompting."

Babel has made an impression with publishers, too, Welch said.

"When I've talked to publishing people about Babel, the implication I get is that there are no other series like this, and also have a strong subscription base and educational component," he said.

"There is also a sense from the people who come here and talk to other people that it has a great reputation," Welch said. "It's like, if you get that gig, do it. It's a really good gig."

Nguyen said he felt honored to be included among Babel's red-carpet list of writers.

"Kleinhans was certainly one of the most architecturally distinctive theaters I’ve had the chance to speak in," he said. "Even the hotel I stayed in, Hotel Henry, was one of the most unique hotels I've visited." 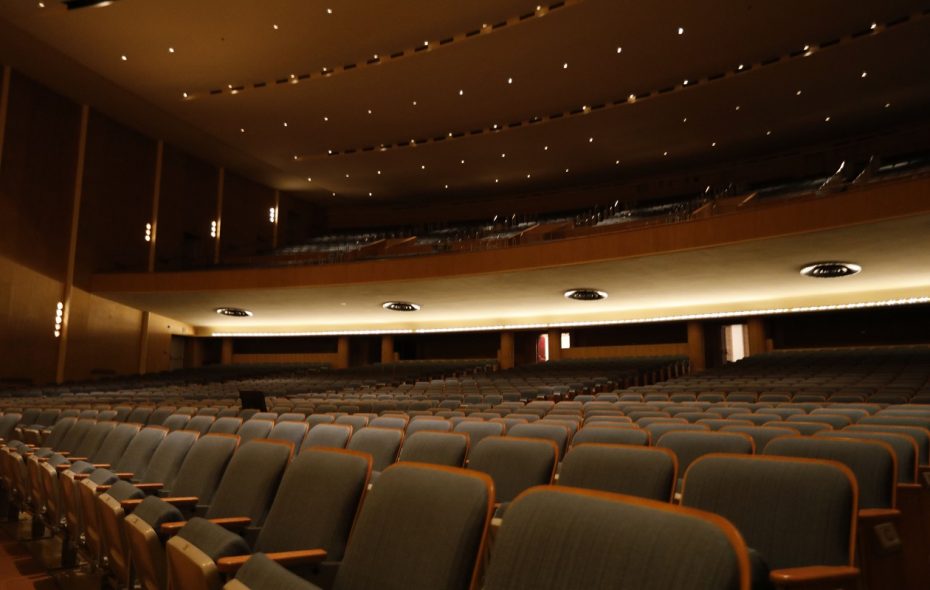