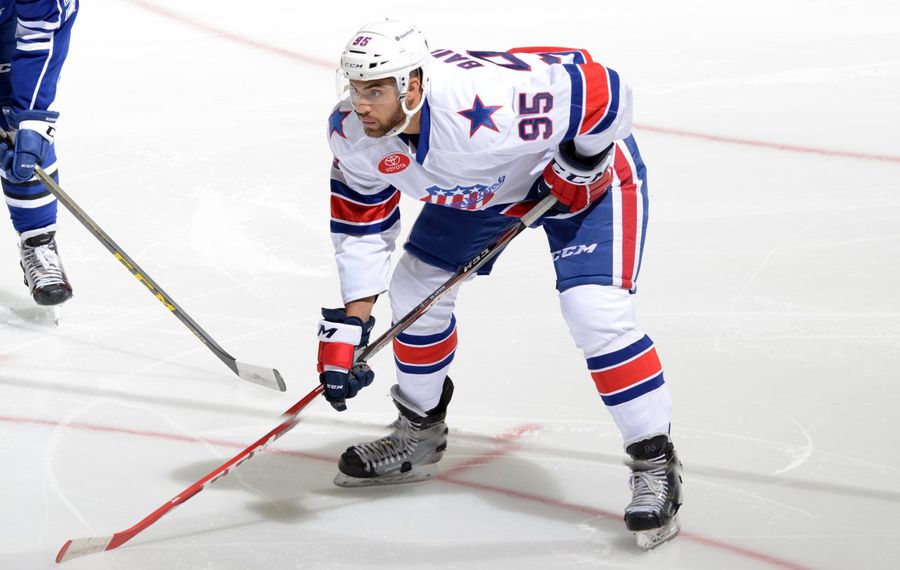 Not long after the Sabres waived Justin Bailey last month and assigned him to the Rochester Americans, Daniel Briere called to offer him some words of encouragement.

Briere knows Bailey, a Williamsville native, from his days starring for the Sabres. Before he morphed into an elite NHL scorer, Briere experienced what Bailey recently went through when the Phoenix Coyotes waived him and sent him back to the AHL.

So Briere, who retired in 2015, wanted to tell Bailey that returning to the Amerks for his fourth season would just be another challenge.

“You look at the career he had, it’s kind of crazy to think that that ever happened,” Bailey said after scoring his first two goals in Wednesday’s 5-2 win against the Cleveland Monsters at KeyBank Center. “He told me he came down and put his head down and worked his butt off and was able to get back up and never come back down.

“So it was some great advice and a great talk from him,” Bailey said.

Bailey, 23, has been leaning on friends such as Briere and family members throughout the worst start of his career. While it took the winger 12 games to score, he had slowly been building toward a performance like Wednesday’s, Amerks coach Chris Taylor said.

“He’s learning how to play the way we wanted him to play,” Taylor said.

In a tilt between the AHL North Division’s top two teams, Bailey was the best player on the ice, utilizing his speed to generate several scoring chances and pump seven shots on goal, tying his career high.

“Anytime I get out here is a time I want to have my best game,” Bailey said of playing in Buffalo.

Bailey opened the scoring 18:11 into the contest, beating two Monsters to the puck and faking a shot before roofing it in from the right circle. He scored again 14:04 into the second period, chasing down a loose puck in the left circle before quickly spinning around and shooting.

“When you go (11) games without scoring, obviously, you want to try to clear your head, try do the things that make you successful,” Bailey said.

He added: “I was moving my feet, I was using my speed to my advantage and making sure that every time I got the puck my first three steps were going forward.”

Bailey, who has played 52 games with the Sabres, probably felt like he was moving backward last month. He admittedly handled going through waivers poorly. Then after a weak performance opening night, Taylor scratched him.

“You go through waivers for the first time, it affects people in different ways sometimes,” Taylor said. “I think he felt a little bad about himself that 30 teams passed on him.”

Taylor said Bailey “felt like maybe the organization gave up” on him.

“We didn’t give up,” Taylor said. “That’s part of his process. A lot of guys go through waivers, a lot of guys have to learn this way. He’s worked hard. He felt a little bit sorry for himself at the start, but he’s picked it up, done a really good job …

“It doesn’t mean he just stepped up his game tonight because he got two goals. He’s making a difference in other things as well, his penalty killing, his forecheck.”

At times during his first three seasons, Bailey ranked among the AHL’s top scorers. He compiled 43 goals in his first two campaigns and was an AHL All-Star two years ago.

Not surprisingly, Bailey said he puts pressure on himself to score.

“When it’s not going in, it sucks, it’s been tough,” Bailey said. “At the same time, I’ve been trying to control what I can control and do the little things well, stay confident in myself I can produce.”

The first-place Amerks, who improved to 8-4-1-0 this season, have lost just once in regulation since Oct. 6, meaning they’ve enjoyed several fine performances.

Wednesday’s effort before about 2,000 fans in KeyBank Center might’ve been their most impressive victory.

“It was one of our best 60-minute games that we’ve played this year,” Taylor said. “I liked every part of it – our goaltender, our defense and our forwards.”

Amerks winger Wayne Simpson, who scored twice, added: “I think it was our best performance of the season.”

Defenseman Zach Redmond scored the Amerks’ other goal, putting them up 2-0 in the first period. Redmond has already scored nine goals and 17 points in 13 games.

While prospects and teammates with NHL experience often overshadow Simpson, 28, he has scored 30 goals over the last two AHL seasons.

“He just does everything well and he’s kind of sneaky good,” Taylor said. “He kind of flies under the radar a little bit. …

“He’s a proven goal scorer in this league. It’s not like we got him out of nowhere.”

Malone, 23, injured his knee in an NHL exhibition game Sept. 17 in Columbus.

“I felt a little rusty off the start, to be honest,” Malone said. “As the game went on, I think I progressed and got a little bit better as things became easier for me.”

Naturally, Malone said he “was really chomping at the bit” to play.

“It’s tough watching your team from the stands, as anyone can attest to,” Malone said. “Finally, I’m able to play and get the monkey off the back.”

“Adding that third-line depth to us that we can match up lines a little bit more is big for us,” Taylor said. “I thought Sean did a great job for his first game back for being out such a long time.”

The Swede will be examined Thursday.

Former Sabres winger Nathan Gerbe is in his second season with the Monsters. After a year and a half in Switzerland, he returned to North America last season. Gerbe, 31, is the Monsters’ captain. ...  Former Sabres forward Zac Dalpe, who went pointless for the Monsters on Wednesday, is tied for the AHL lead with 12 goals and 19 points.... Taylor said Amerks defenseman Brendan Guhle missed the game because of the flu. … Bailey’s first goal was his 100th AHL point. … The Amerks hadn’t played the Monsters since a 4-3 overtime loss April 9, 2016, in Rochester. The Monsters returned to the Eastern Conference this season. … The Amerks are 5-2 in KeyBank Center since the Sabres renewed their affiliation with them in 2011.