A Winter's Promise, The Mirror Visitor Book 1 by Christelle Dabos; translated from the French by Hildegarde Serle; Europa Editions, 491 pages ($19.99) Ages 15 and up. 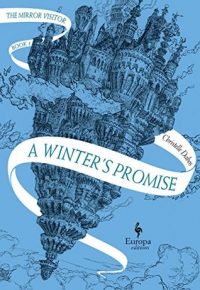 Prepared to be dazzled by this thrilling debut novel from French author Christelle Dabos, the first installment in the Mirror Visitor quartet, with its fascinating characters, intricately constructed fantasy world, pulse-pounding suspense and unlikely romance.

The world as we know it, referred to as the "first world,"  has been lost in a "Rupture," and the universe now consists of "arks," planetary fragments of the original Earth, floating celestial islands ruled by the spirits of immortal ancestors.

Quiet, bespectacled, clumsy Ophelia lives a peaceful existence on the ark of Anima, working in the Museum of Primitive History, using her special ability to read the past of objects simply by touching them. (Thus she must always wear readers' gloves, to avoid contaminating an object with her own state of mind.) Her other unique gift, discovered by accident at 13, is the ability to travel through mirrors. Her quiet life is shattered when the matriarchs who rule Anima promise her in marriage to Thorn, member of a powerful clan from the Pole, a distant ark in the frigid Great North.

Ophelia, with her Aunt Rosaline as chaperone, must travel with Thorn, a stern, tall bear of a man who seldom speaks, to the Pole and his city of Citaceleste, where they take up residence in the manor house of Thorn's aunt, the lovely widow Madam Berenilde. Unlike Anima, with only one clan, The Pole is inhabited by competing clans, jockeying for power, and Ophelia after much surreptitious detective work, much of it in her disguise as Berenilde's mute valet, realizes she is a pawn in a dangerous political game.

Dabos has constructed a fascinating, beautifully complex world, with all manner of wonders: the transport by steamship through wind corridors between arks, the manipulation of illusion to create a summer garden in a frozen land, the clans with their unique powers including the "claw," or mind blows that inflict acute physical harm. Her villains are truly ominous, from Thorn's terrifying half-sister Freya to Knight, a chubby boy, who is the most sinister of them all.

The writing is vivid. Here Ophelia arrives at the frozen Pole: "Ophelia stumbled out of the sleigh to find herself ankle-deep in powdery snow. It poured over the top of her boots like cream...the wind was lacerating." Or a description of the Citaceleste: "With half her body above the void, Ophelia recognized the anarchy of the wonky turrets, soaring arcades, and ramshackle ramparts."

Ophelia, constantly sneezing, sick from the cold, with her "dazed face, her skew-whiff glasses, her red nose and her messy hair," wearing "her dreariest dress, a corseted antiquity, gray and austere" is a brave, smart and most compelling heroine. Thorn, whom she perceives first as a giant bear, and later "an endless spine under his traveling tunic" or "stiff as a stalagmite" comes into clearer focus in the course of the novel. A cliffhanger ending leaves the reader eagerly anticipating the next installment. 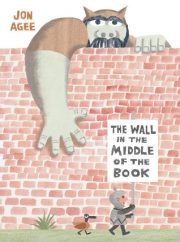 A foolish knight is convinced that the wall in the middle of the book is protecting him from the dangers that await on the other side including an ogre ("If the ogre ever caught me, he'd eat me up"). The knight is so certain of this that he fails to notice the ever-growing hazard on his own side of the wall until it's almost too late. Agee's signature droll illustrations of gorilla, rhino, tiger, crocodile and more make a fine entertainment of a not-so-subtle political lesson. Another fine book from the creator of "Life on Mars" and "Little Santa."