Viola Hill was going door to door maybe 65 years ago, carrying political petitions near Hickory and William streets and looking for signatures from registered voters, when an older woman answered her knock and quietly said she was unable to help.

The woman explained that she had been alive in the years before women had the legal right to vote in New York. Even after that right, so long denied, finally became a law, the woman said she never had the confidence to register. Hill listened, then patiently explained where to register and how to do it.

It was the framework toward exercising what Hill sees as the most precious and hard-earned American privilege.

“She told me she would go and vote," said Hill, a 100-year-old whose long life encompasses a pivotal moment in state history.

In 1918, when Hill was only an infant, women in New York could legally vote for the first time in a general election. The historic moment came as the result of a statewide referendum, in 1917. It was a major step forward in a national quest for women's suffrage that had deep roots in Upstate New York.

Hill grew up in the decades after the barriers against the women's vote came down, and the full meaning of Election Day has never left her.

“The vote should matter to all women, any women,” Hill said. “Whatever you think or believe as a human being, people won’t be nice unless you have a system for fighting back.”

In 1918, the then-Buffalo Evening News described the participation of women as “epoch-making,” even as Democratic challenger Al Smith unseated Republican Charles Whitman in a governor's race so close the newspaper initially called Whitman the winner.

The role of women in that election “was extremely important,” said Andrea DeKoter, acting superintendent of the Women’s Rights National Historical Park in Seneca Falls. The nation was still about two years away from the 19th Amendment, which enshrined that right to vote.

New York “was seen as really pivotal,” DeKoter said, as “a huge state and an important state that represented progress.”

A century later, Hill and dozens of other women of her age – about 50 female centenarians voted a year ago in Erie County, according to the Board of Elections – will play an active role in today's election, which some observers describe as the culmination of the electoral "year of the woman."

There are “record numbers of women nominees running at every level,” said Debbie Walsh, director of the Center for American Women and Politics, a unit of the Eagleton Institute of Politics at Rutgers University. She was speaking of races involving the U.S. Senate and the House of Representatives, as well as state legislatures nationwide.

Since 1980, Walsh said, women have typically turned out in greater numbers than men, to vote. The larger question this week, she said, is whether the high-profile burst of energy will be enough to accelerate true change toward more equivalent levels of elected representation, which is still predominantly male.

"Women are more energized about politics this year, with more as voters and more as candidates," said Walsh, who said much of that increase is being seen within the Democratic Party. "There is a potential for this energy to have an impact on the election of more women, particularly Democratic women." 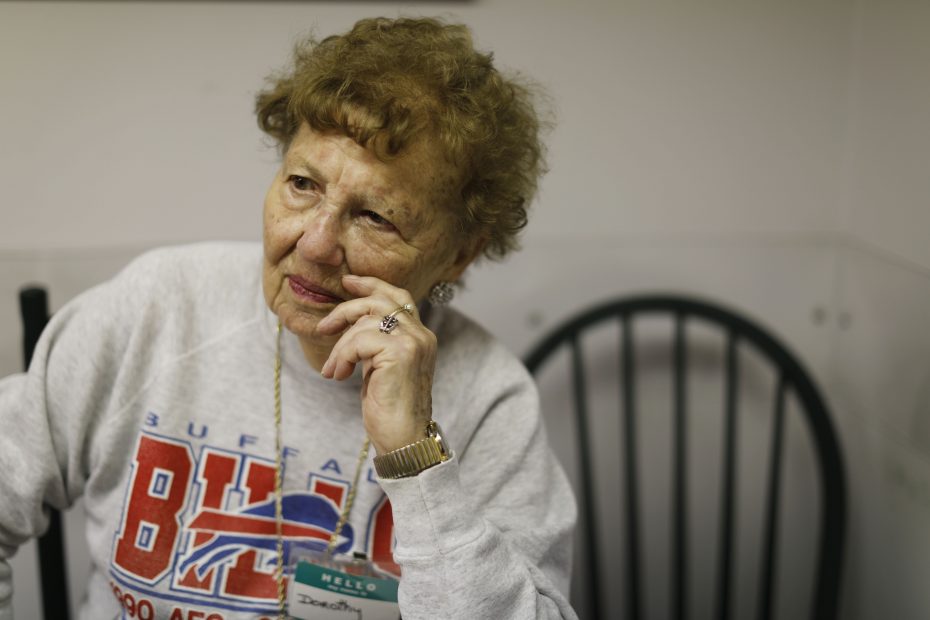 Dorothy Gietl has a century's worth of perspective on a woman's right to vote. (Derek Gee/Buffalo News)

Agnes Petrie turns 100 in December. While she is making no guess about Tuesday's results, she said she is enjoying this cascade of women candidates.

“I’m glad they’re getting out there,” she said. “They’re helping to wake up all these guys who were sleeping.”

Petrie, a Lake View resident, is a Democrat who was deeply influenced by her Republican grandmother, Jenny Shepard. The older woman was born long before women had the legal right to vote, and she “was always one for watching the government,” Petrie said, “for saying we should know the good and the bad and everything that’s going on.”

Raised on the city’s West Side, Petrie was a toddler in 1920, when the 19th amendment was ratified. She hopes young women born long after that right was first assured can regain a sense of urgency about why it matters.

She has lived to witness a great circle: In many ways, the issues that animated statewide politics a century ago are echoed in some fashion today.

"Absolutely. Immigration, women's rights, the rights of voters, all of these things were as present in the debates between Charles Whitman and Al Smith as they are today," said Terry Golway, a journalist, historian and editor with Politico whose new book, "Frank and Al," details the friendship and rivalry between Smith and Franklin Delano Roosevelt.

National grief and disappointment after World War I, Golway said, also led to intense back-and-forth about whether America should engage more widely in the world or withdraw for a more internal focus - questions, in different form, that burn fiercely right now.

At 100, as a living bridge to those years, you sense that civic fire within Viola Hill.

Born in South Carolina, she arrived in Buffalo with her family when she was a small child. Her grandparents were sharecroppers who never had the chance to vote in the suffocating conditions after the Civil War.

As a young African-American woman who came of age amid the Great Depression, she quickly learned how many opportunities available to others were closed off for her.

Change, she came to believe, often arrives only through the power of the vote.

Hill was 15 when she quit high school – surrendering a dream of going to college for a teaching degree – to do housework that helped bring food into the house. Much of her life was spent doing hard, physical labor. The major reason for her vitality at 100, she said, is that her “body was always in motion.”

“Those were the days when they never figured women were important enough for anything,” she said. “They’d say it was a man’s world, and women were not considered for a lot of things.”

How important is the vote to her? At 100, as she has done for years, she was moving long before dawn today to show up for work, as she does each year, at a polling place.

“It’s a privilege,” Hill said. “It’s not like we live in a country with a king.”

In the same fashion, Dorothy Gietl cannot remember the last time she failed to vote. She paused for an interview Monday amid the clothing racks at Ladies of Charity services on Broadway, where she has volunteered for decades.

During her childhood, her parents ran a Buffalo grocery store at Ludington and Ideal streets. They always brought along their little girl when they voted. That example resonates with their daughter, nearly a century later.

She votes, she said, from the same belief in community that inspires her to volunteer. Her husband, John Gietl, was a veteran of two wars who died in a fire on his Air Force base. That sacrifice only elevated Gietl's contention that everyday women and men have a deep, almost spiritual responsibility to vote as “part of your government.”

Gietl has a doctor's appointment this morning, and then her son, Robert, will give her a ride to her Lancaster polling place. More than halfway through a year toward her 101st birthday, she is faithful to a right that did not even exist in New York until the year she was born.

“I'm going to vote,” Gietl said, “for the people that I feel deserve the job.”