Buffalo Diocese officials, acknowledging a recent "tsunami" of new claims of child sex abuse, said Monday they added 36 priests' names to a list released in March that identified clergy who had been credibly accused of abuse.

The diocese's list of credibly accused priests now stands at 78 priests – and includes 16 priests who are members of religious orders, a category the diocese excluded in an original list of 42 priests.

Diocese officials said they counted a total of 176 diocesan and religious order priests against whom child sex abuse allegations were made, but they chose not to identify deceased priests who had a single allegation against them.

The new complaints relate to abuses alleged to have happened decades ago, according to diocesan officials.

“People in this diocese, both because of the news in general and because of the recent '60 Minutes' program, are under the impression that there is rampant child sex abuse going on right now in the diocese and that is absolutely not true, and I have the numbers to demonstrate that,” said Lawlor F. Quinlan, a lawyer for the diocese.

Quinlan said that not a single priest ordained in the Buffalo Diocese in the past 20 years has been accused of abuse of a minor and that none of the 191 new claims involved complaints of abuse within the past 18 years.

Quinlan made his remarks at a press conference in which Bishop Richard J. Malone acknowledged that the diocese was unprepared for the number of victims who have reported abuse over the past several months.

“We asked the victims to come forward. They have, and the numbers were overwhelming. I think the image, the word, tsunami, is not inappropriate,” Malone said.

The diocese in previous years received maybe seven new claims of abuse in a year, said Quinlan. This year, the number was 191 new claims, some of which surfaced in applications to the diocese’s new program to compensate victims of abuse, he said.

Quinlan addressed a misperception left by a recent “60 Minutes” episode, that the diocese was keeping eight or nine priests in ministry despite credible claims of abuse.

The Rev. Robert Zilliox was “technically correct” when he stated in his interview with “60 Minutes” that eight or nine Buffalo Diocese priests had not been removed from the priesthood, Quinlan said.

The news conference immediately followed a special meeting inside Infant of Prague Church in Cheektowaga between diocesan officials and an estimated 250 active and retired priests.

Two of the priests during the meeting urged Malone to step down because of his handling of the sex abuse scandal, and the bishop reiterated that he does not intend to resign.

"We can steer through this storm," Malone said. "The Diocese of Buffalo deserves stability. A resignation does not bring stability."

The bishop was flanked at the news conference by Quinlan and fellow diocesan lawyer Terrence Connors, as well as eight people who work in the chancery.

It was the first time Malone held a press conference in which he fielded questions since the leaking of internal church documents in late August escalated a scandal that first began unfolding in February with a retired priest’s admission that he had molested dozens of boys in the 1970s and 1980s.

Malone, Quinlan and Connors did most of the talking.

Quinlan spent nearly an hour trying to provide context for how the diocese has handled abuse cases since American bishops implemented a “zero tolerance” policy in 2002 known as the Charter for Protection of Children and Young People.

Malone said he thinks it is unlikely that the diocese will have to pay so much money to clergy abuse victims that it will be forced to file for bankruptcy protection, like some other dioceses have done.

"We have hopefully the resources to handle the claims," the bishop said.

Protesters upset over the clergy abuse allegations held signs and demonstrated outside the Cheektowaga church before the news conference.

Mary Ellen Sanfilippo said the diocese's priests need to stand up to the bishop. "They need to do the right thing and be obedient to God, not Bishop Malone," she said.

“There are real issues of credibility, things that are said are inconsistent. I think the laity is very disheartened. People in this parish alone have said they are going to withhold $60,000 for the ‘Upon This Rock’ campaign until there is a change in leadership,” Ledwon said. 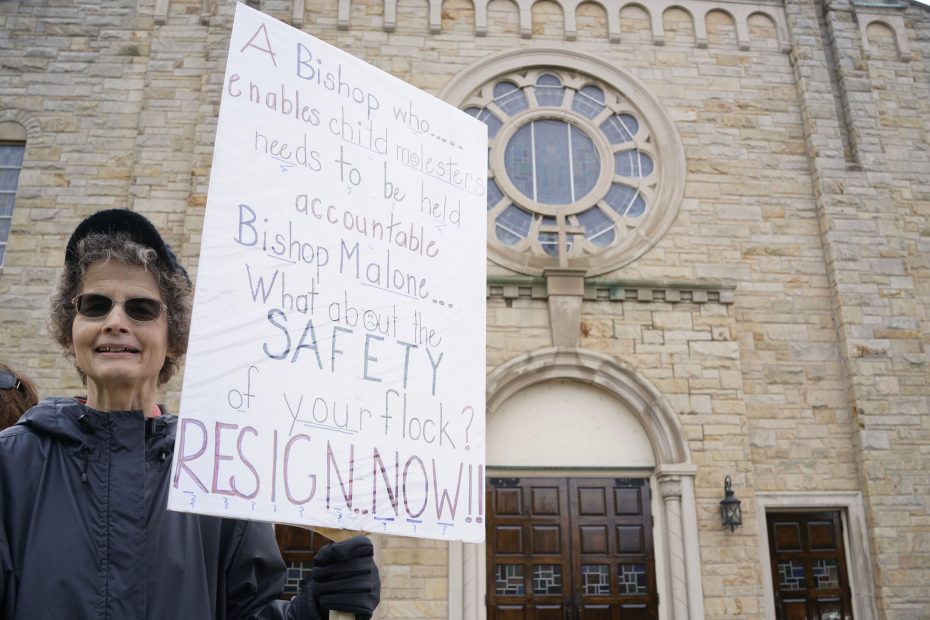 Peg O'Connor of South Buffalo protests outside the Infant of Prague Parish in Cheektowaga before a press conference by Bishop Malone. (Derek Gee/Buffalo News)

But some other priests said that they believed Malone was making progress and trying to move the diocese beyond the crisis.

“It is a painful thing for all of us, but especially and above all, for the true victims of abuse. There was a lot of concern at the meeting for our brother priests and we have to balance that. Bishop Malone is trying to move us forward.  There is no cover-up. We want to take care of people who have been abused,” said the Rev. David LiPuma, president of the Council of Priests and pastor of St. Peter Church in Lewiston.

"I don't agree with everything he's doing, but he's trying to do the right thing," added the Rev. Richard DiGiulio, who is retired.

Since February, the diocese has been reeling from a stream of news stories exposing the alleged sexual abuse of children by priests, and the diocese's failure in many instances to remove the priests from ministry.

The scandal began when the Rev. Norbert Orsolits admitted to a Buffalo News reporter Feb. 27 that he had molested "probably dozens" of boys in the 1970s and '80s. Orsolits admitted his sexual abuse hours after Michael Whalen accused Orsolits of abusing him at a news conference.

On March 18, The News broke a story about the Buffalo Diocese secretly paying $1.5 million in 2016 to settle a lawsuit filed in Hawaii by a man who alleged the Rev. James A. Spielman had sexually abused him when he was 14 to 17 years old.

Two days later, the bishop publicly identified for the first time 42 priests whom the diocese had determined had been credibly accused of sexual misconduct with a minor.

Additional revelations came in August after the bishop's former secretary, Siobhan O'Connor, leaked confidential diocesan documents about clergy abuse to WKBW-TV. WKBW reported that Malone had allowed the Rev. Arthur J. Smith to serve as chaplain at a Niagara County nursing home and on a cruise ship after a Catholic elementary school principal warned that Smith had engaged in inappropriate conduct with a child whom she believed he was grooming for a sexual relationship. It also reported Malone allowed the Rev. Robert Yetter to serve as pastor of St. Mary’s Catholic Church in Swormville after he had been accused of making unwanted sexual advances on two adult men.

That prompted Deacon Paul Snyder of the Swormville church and some politicians, including Lt. Gov. Kathy Hochul and Rep. Brian Higgins, to call on Malone to resign.

In September, the state Attorney General's Office announced it was launching a statewide investigation of six Catholic dioceses, with a special focus on Buffalo, and in October news broke that the FBI was investigating the Buffalo Diocese.

O'Connor and the Swormville church's new pastor, Zilliox, both criticized Malone's handling of the abuse complaints while appearing on "60 Minutes" Oct. 28.

Malone said the diocese is preparing to send a request to the Vatican to remove Orsolits as a priest, a process known as laicization.

Orsolits told The News last week that since February no one from the diocese has contacted him for information about the "probably dozens" of boys that Orsolits said he molested.

"If it hasn't been done, it should be," Malone said.