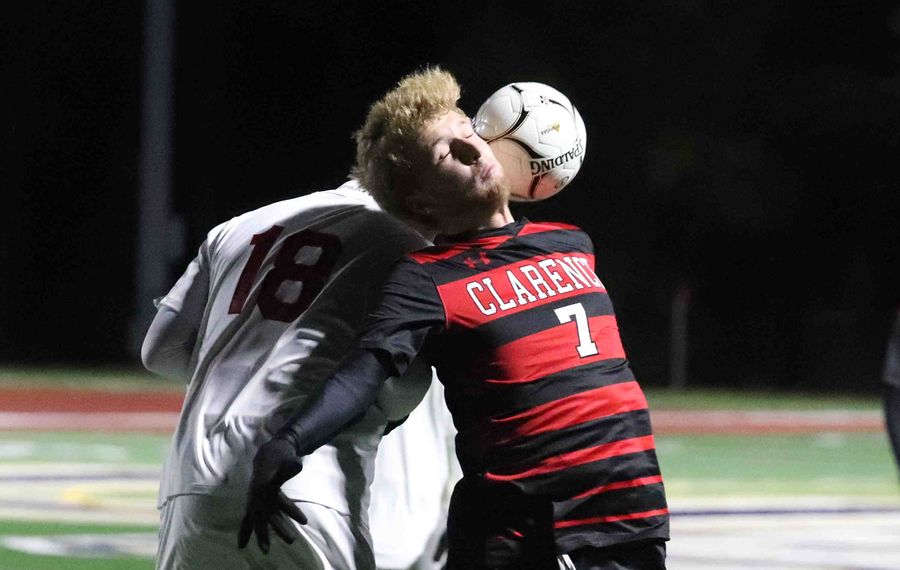 Up one goal with a chance to defeat the state’s top-ranked team and advance to the state tournament in Class B, East Aurora had no plans to sit back in a defensive posture and hold on for dear life.

Instead, the Blue Devils settled down after withstanding a flurry of opportunities from unbeaten Section V champion Bath Haverling in the opening 40 minutes and attacked their opponent, playing with a gusty wind at their backs, in the second half.

East Aurora, the state’s second-ranked team, finished strong in a 2-0 win on Saturday in the first of three Far West Regional games at Sweet Home. Alex Baase scored in the first half, driving into the net a loose ball from the top of the box, and Jonathon Putney provided the second half insurance, breaking loose from a defender down the middle and notching his team-leading 24th goal.

"All year, we’ve been talking about states being the goal, but once playoffs came around we knew we’d have to take it one game at a time," said Putney, who’s scored seven times in the last three postseason games. "That’s what happened last year – we started looking ahead to states and we lost this game."

The Blue Devils (20-0-1) move on to the state tournament for the first time since 2015. They’ll play in the state semifinals Nov. 10 at Middletown High School.

"We did it four years ago, and it’s just the best feeling to be back," said Baase, a senior who along with classmate Josh Bean were part of the 2015 team.

Clarence also advanced to next weekend’s state semifinals, for the first time since 2010, after a 1-0 win over Hilton in Class AA on the strength of a Taha Ahmed header with 14:34 left in the game. After consecutive 1-0 losses in the regional round, Clarence wasn’t to be denied as it controlled much of the play.

"Leadership has been great for us for years, but this year we had some senior leaders that had the taste of losing two years in a row in their mouths," Clarence coach Mike Silverstein said. "They felt that hardship of not being able to make it to states and that translated into a great game for us today."

Williamsville East came back from a pair of one-goal deficits but fell to Brighton 3-2 in Class A. Brighton will return to the state tournament for the first time since 2011.

"They outpossessed us big time, but early on we had some pretty good chances and were able to capitalize. But, in the end, I think they were just a little bit stronger than us," longtime East coach Jeff Librock said. "They’ve got some good players up top and we let one go with a little bit of space (on the game-winner)."

The unheralded East Aurora defense made the difference in the Class B game, according to East Aurora coach Kevin Beale, who credited senior backs Adam Russ, Noah Denz, Kam Kmicinski and Chris Fuller. Senior goalkeeper Billy Mahoney finished with eight saves for the shutout and came far out of the net on several occasions in the second half to make stops and break
up passes.

In Class AA, senior Kenny Suen, who started the season as a goalkeeper, sent a cross from the left side to Ahmed and the junior delivered a diving header into the goal. Suen also scored the game-winner in the sectional semifinal. Spencer Catalano recorded the shutout for Clarence (18-2).

In Class A, Cameran Townsend and Trey Buscaglia of Williamsville East (18-3) answered Brighton goals in the first and second half, respectively, but Gabriel Barraclough-Tan, who his coach Adam Hiller said has been dinged up most of the season, scored on a blast from 25 yards out with 21:27 left in the game and it stood up. Senior Samuel O’Connor scored twice for Brighton, the second goal on a penalty kick. Buscaglia’s goal, his 26th of the season, tied the score at two with
24:27 left in the game.