The fever, chills and deep malaise Sue Durfee felt two years ago during five bedridden days returned sharply to her mind this week as she stopped in a Grand Island grocery store pharmacy, rolled up a sleeve and asked for a flu shot.

“It didn’t hurt at all. I pass out when I give blood, but I'm fine with this shot,” said Durfee, of Boston, N.Y., after Regional Tops Markets Pharmacy Manager Courtney Jones made quick work with a needle.

Four dead strains of the influenza virus were pushed into Durfee’s left shoulder. She hoped they would provide an immune response and protection in coming months from an experience she prefers not to relive.

In our region, and across America, it is a choice most adults in recent years have been unwilling to make – despite scientific evidence that shows the benefits of the flu vaccine.

Only about one-third of those 18 and older in upstate New York who should get a flu shot do, according to a new Univera Healthcare study. The figure is slightly lower than the 37.1 percent nationwide who got the vaccine last flu season – down 6.2 percent from the previous year, the federal Centers for Disease Control and Prevention reported this month.

"Historically, adults do poorly with vaccines,” said Dr. Thomas Russo, professor and chief of infectious diseases in the University at Buffalo Jacobs School of Medicine & Biomedical Sciences. “The other thing is that there is a fair amount of misinformation out there."

The CDC also recently reported that the flu caused more than 80,000 deaths and more than 900,000 hospitalizations during the 2017-18 influenza season, roughly twice that of most recent seasons.

Though about 90 percent of the deaths involved those over age 65, the flu also killed 180 young children and teenagers, according to the federal agency.

Those numbers pale in comparison with a worldwide flu pandemic that reached its zenith a century ago this time of year during a season in which an estimated 500 million people – roughly a third of the global population – became infected with the Spanish flu virus.

More than 50 million people died from illness related to the virus – a percentage only slightly higher than the 9 percent of the 28,398 Buffalonians who contracted it during the second, and most lethal, of three waves in 1918-19, according to local news accounts from the time. Schools, theaters and other public places closed in the Queen City amid quarantines across the globe.

Scientists had yet to discover viruses at that time, much less vaccines to prevent disease. Antiviral and antibiotic medication, too, were not yet part of medical toolboxes now used to treat flu and related infections, including pneumonia.

"People tend to forget about the bad things when it comes to natural diseases and think they can get away without getting vaccinated. It's just not true," Russo said.

Why do so many forgo the flu vaccine in an age where such a preventative tool is available? 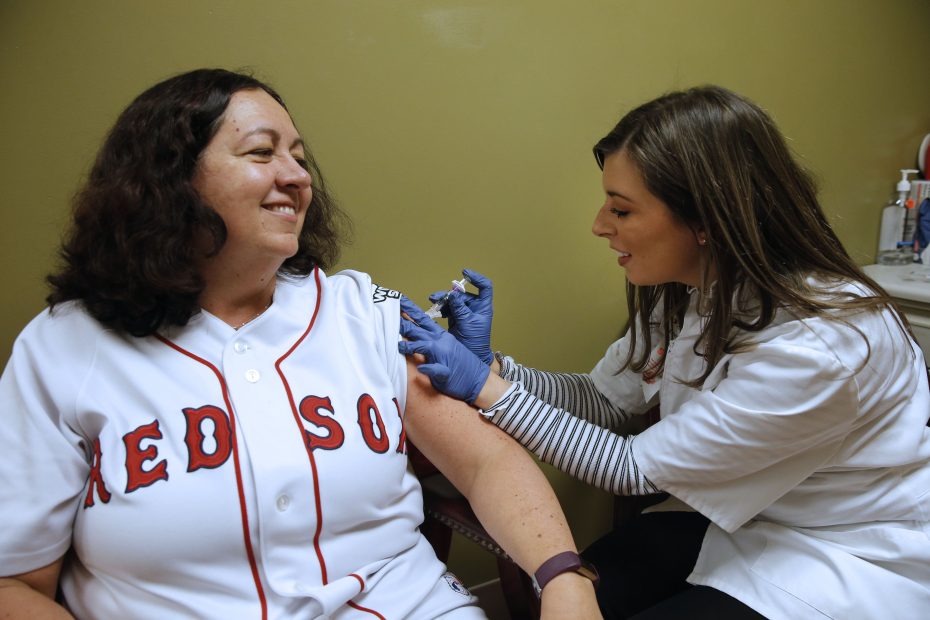 Courtney Jones, regional pharmacy manager with Tops Markets, gives a flu shot to Sue Durfee, left, of Boston, N.Y. Durfee said she got the single-dose vaccine, which has no preservatives, after a bad bout of the flu two years ago. (Robert Kirkham/Buffalo News)

The reasons Jones hears most? The shots hurt. They cause the flu or, worse, chronic disease. They’re not worth the bother, or risk, for someone who’s never had the flu or is healthy.

All are excuses, not reasons, and exaggerated – if not downright false — those in the health field say.

"It's easy to forget how serious these diseases are," Jones said. "A lot of people who get the flu are bedridden for maybe a week or so, but once some people in long-term care or hospitals contract the flu, it could end up taking their life. A lot of times, it takes someone or a loved one getting the flu and seeing how serious, or severe, it can be before they realize how important a flu shot is."

It’s best to get the flu shot early in influenza season – now – because the vaccine takes up to two weeks to reach its highest effectiveness and because young children who get it for the first time will need a second booster shot about four weeks down the line.

FAQ: National and local experts on why you should get a flu shot

The vaccine will offer protection throughout the flu season, which generally starts in late August and can run through May, peaking in fall or early winter. It isn’t perfect. Still, it will lessen the odds you’ll get the flu, shorten the time and severity of a case if you get one, and create greater community immunity in the process.

“Your decision to skip the flu vaccine this year could result in you being a person who spreads the virus,” said Dr. Richard Vienne, Univera Healthcare vice president and chief medical officer. “For young children, the elderly, and people with compromised immune systems, the flu virus can be deadly, and it isn’t always obvious who among us is most vulnerable.”

Durfee, for one, was pleased with the choice she made this week, not only for herself but for her husband; for her mother, who is older; and for several nieces, nephews, grandnieces and grandnephews. "I wouldn't want to get them sick," she said.

The medical community continues to look for ways to improve the flu vaccine.

"Having annual vaccines is far from optimal," Russo said. "What we'd like to get moving forward is a universal vaccine that you can get one and done for at least a number of years. We'd also like to increase the efficacy in protection. And lastly, as a global community, we'd like to increase our agility so, if a new pandemic strain suddenly arises in a very rapid fashion, we can develop a vaccine to afford protection for individuals in communities and nip it in the bud."