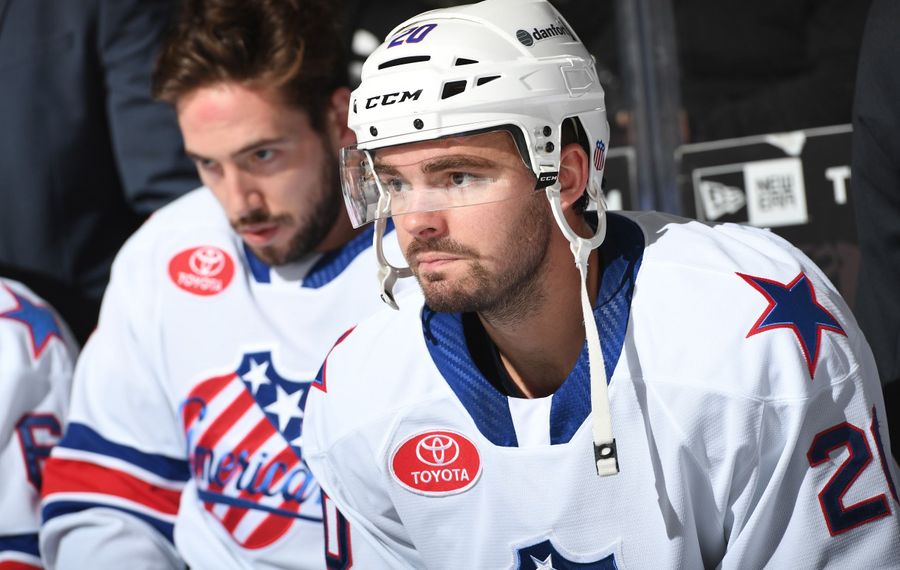 Longtime Sabres beat writer Bill Hoppe of BuffaloHockeyBeat.com will be writing about Sabres prospects, the Rochester Americans and related topics this season.

Sabres prospect Eric Cornel understands he’s playing for his future in his third season with the Rochester Americans.

Cornel’s entry-level contract expires following the 2018-19 campaign, meaning Buffalo’s regime, which did not draft the center, can simply walk away from him.

So Cornel, the 44th overall pick in 2014, has embraced the situation and evolved, Amerks coach Chris Taylor said.

On a first-place team featuring three of the AHL’s top four scorers and a slew of prospects, Cornel has managed to stand out during the Amerks’ torrid 7-2-1 start.

“He’s been our unsung hero,” said Taylor, whose Amerks host the Hershey Bears on Friday at Blue Cross Arena.

The 6-foot-2, 198-pound Cornel, an 83-point scorer in his final junior season, has seized a checking role, adding skill and speed to the third or fourth line and also killing penalties.

“That’s allowed me to sort of play a bigger role, get more ice time, stay in the lineup,” Cornel said. “It’s exciting to be able to play a role like that you know has an impact on the team.”

Taylor’s praise is meaningful to Cornel.

“He’s a guy as players we really respect,” Cornel said. “We know that he’s been through it just like us. I didn’t even know that what I was doing was being noticed that much.”

Taylor said Cornel’s play has forced him to award him an increasing amount of playing time, a difficult task with three strong scoring lines.

“He earned his ice time, he keeps earning more and more,” Taylor said. “It’s hard not to play him. He competes, not just on the ice, but off the ice. …

“From where he came from three years ago to now, it’s remarkable to me.”

If Cornel keeps performing well, he could earn a promotion to the Sabres someday.

That would certainly make the Sabres’ 2014 draft look a lot better. Other than winger Sam Reinhart, none of their other picks has played even one game for the team.

But that class still possesses some promise.

Cornel, one of three second-rounders, is back on the radar. Meanwhile, rookie winger Victor Olofsson, a seventh-round pick, 181st overall, is the AHL’s leading scorer and was the league’s Player of the Month for October.

While the Sabres picked Cornel high, his modest output early in his AHL career lowered expectations. With so many other Sabres prospects earning attention, some pressure has been taken off Cornel, who believes developing out of the spotlight can be beneficial.

“A year like this year, where I may not be expected to put up the points, that’s kind of almost a good thing, because you might surprise people a little bit and the pressure’s not there,” said Cornel, who has compiled two goals and three points through 10 games.

Taylor has known Cornel since the Sabres drafted him and clearly respects the initiative the youngster has taken to change.

“He’s evolved into a guy that he’s very reliable on both sides of the puck, he brings great energy,” Taylor said. “He’s a guy that can get in on the forecheck, disrupt it. He’s a bigger guy than he looks. … He’s got good speed, and he’s built up his strength so he can knock guys off pucks now and get over pucks.

“I think he’s developed into a player that can play (on the) third and fourth line and can give a lot of energy and score that timely goal you need. Those guys are … very valuable to your hockey team. People underestimate those type of players, they don’t give them enough credit, but I do. Eric is such a valuable piece to our team.”

Taylor said he thinks of Olofsson’s honor as an award all the Amerks can share. The Swede, 23, has scored five goals and 15 points in his first 10 AHL appearances.

“I’ve been very impressed,” Taylor said of Olofsson’s play. “The first couple games it took him a little bit to get adjusted, but after that, he figured it out.

“I look at this as a great award for him and also as a team award. He can’t do it alone. That’s a reflection of the power play, because he’s on it, it’s a reflection of his linemates (and) how well our team is doing to get those type of awards.”