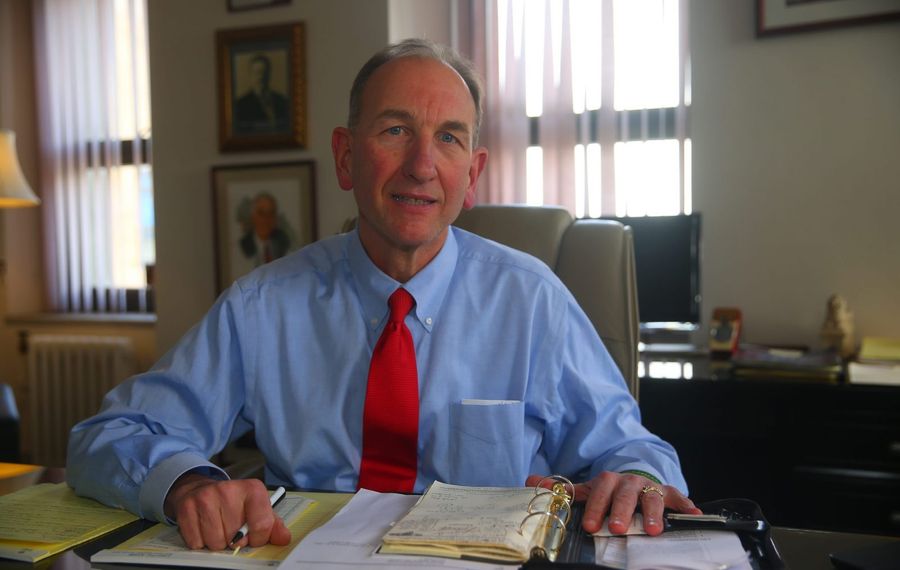 Buffalo Comptroller Mark J.F. Schroeder's decision not to go to the bond market to fund $1 million in emergency demolitions that Mayor Byron W. Brown included in his 2019 Capital Budget proposal has city officials wondering where the money will come from and warning it could lead to a public safety problem.

It’s a bad idea to keep borrowing to pay for emergency demolitions because the projects' cost increases as the city makes interest payments, the comptroller said. And the practice has been frowned upon by the city’s auditors, bond counsel and the Buffalo Fiscal Stability Authority.

Instead, Schroeder recommends putting the $1 million in the general fund budget in the 2019-20 fiscal year to avoid interest costs.

“Last year we recommended that the city shouldn’t be” funding demolitions from the capital budget, “but we went along with it anyway, saying this would be the last time, giving the administration time to put that in their (operating) budget for this coming (fiscal year),” said Patrick J. Curry, Schroeder’s top aide during a recent Common Council meeting. “That didn’t occur. So we’re not looking to use bond proceeds to do demos or general repair.

But the city is already facing tight financial times, other city officials pointed out. And if there's no money for emergency demolitions of structures, it could become a public safety problem.

"Based on the demonstrated impact on the health and safety in every neighborhood across the city going back decades, we are confused as to why for the first time the comptroller is asserting that he will refuse the duty required of him by law, which is to sell the bonds for all of the items in the adopted budget," said Brown spokesman Michael J. DeGeorge. "And we're even more concerned that there seems to be a willingness to play politics on potential life and death matters for first responders and city residents. As we have always said, you cannot put a price on public safety."

The Common Council has until Dec. 15 to review, amend and approve Brown's capital budget proposal. If Schroeder refuses to go to the bond market it would be up to the Common Council to determine a course of action.

Schroeder also said he will not go to the bond market for $618,000 to pay for a city-wide tree planting and removal project Brown included in his Capital Budget proposal. The comptroller refused because it is routine repair and maintenance that "by definition are not capital improvements," Curry said.

But Schroeder's refusal to pay for emergency demolitions with borrowed funds has drawn most of the attention in City Hall.

Since 2006, when Brown first took office, there have been 1,479 emergency demolitions at a cost of about $31 million, according to the administration.

From 2012 to 2018, the city has gone to the bond market to borrow about $16.9 million for emergency demolitions. In that same time period, the city incurred $2.5 million in interest on those debts, Curry said.

The city’s outside auditors, bond counsel and the control board have been flagging the practice of borrowing to pay for demolitions "year after year” for several reasons, Curry said, including:

• There is no system in place to track if the city recovers any of the money it spends on demolitions.

• The tax-exempt status on the bonds could be jeopardized because the demolitions are not city-owned property.

• Capital investments usually pay for bridges or buildings, things that have a value that the city is trying to maintain or increase.

The Capital Debt Management Policy that the Council approved last April says emergency demolitions do not meet the definition of capital projects and it requires that bond proceeds be spent only on projects that improve city assets, Curry said.

But University Council Member Rasheed N.C. Wyatt argued that interest rates are low now and it’s smart to take advantage of them. The number of demolitions has declined over the years and are "probably mostly emergency in nature, more so than eyesores," he said.

Paying for demolitions out of the general budget would add to the city's already tight financial situation, said Niagara Council Member David A. Rivera. He noted the comptroller has said there is a $28 million cash flow shortage so far this fiscal year because revenues have not meet the administration's expectations and an anticipated budget gap of $23 million from the 2017-18 fiscal year.

James Comerford, commissioner of permits and inspections, said if the city can’t find the money to fund the demolitions, it could become a public safety issue.

“The firemen call us at night sometimes to take (a building) down that night because they’re a danger, and we’re not going to have money for that," he said. "It’s a problem. We’ve got to find something."