From the life-sized “Tin Man” in the dining room to the quirky sculptures in the garden, one gets the idea that every day has a touch of Halloween to it at the home of Charlie and Barb Mulloy.

Vintage hats, clothing and handmade jewelry are part of the decor. Pumpkins take on facial expressions with springs, buttons and other objects.

Even the outdoor sculptures are festively costumed in scarves and hats, while a decorative bird sits on the head of one of the busts displayed in the garden.

“I find stuff and change it,” said Barb Mulloy, an artist who can’t resist a flea market find.

The Mulloys live in a 19th-century farmhouse in Clarence Hollow with tilted floors and what Barb Mulloy calls “trapezoid-ish” walls.

“There’s not a right angle to be found,” she said, when describing the home earlier this fall when it was featured as a Home of the Week – an online Buffalo News feature. (You can read how to submit your residence as a possible Home of the Week here.)

Intrigued by the photos submitted by Mulloy, The News recently returned to photograph more of the approximately 1,750-square-foot home and to interview the couple. 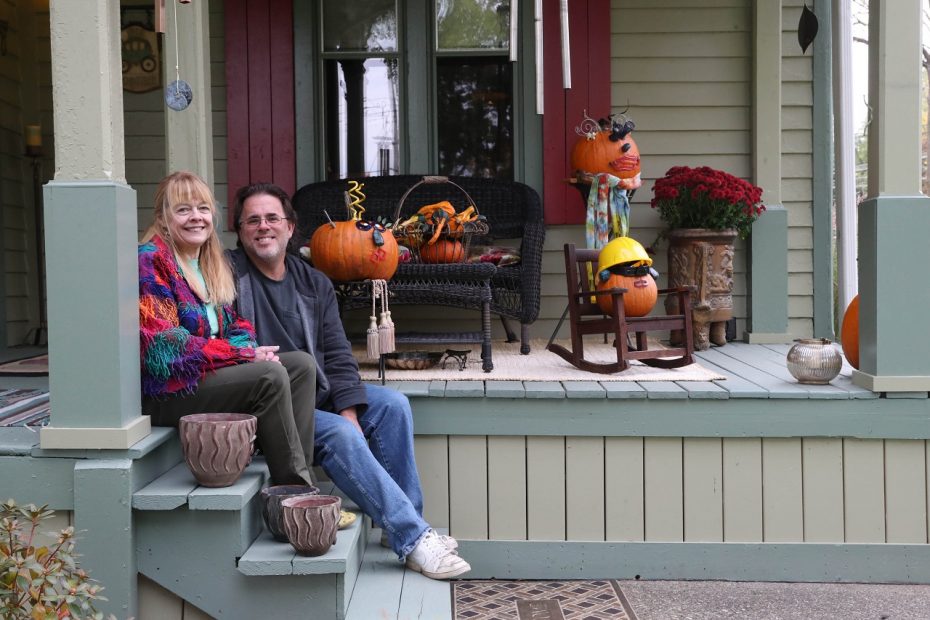 Barb and Charlie Mulloy on the porch. (Sharon Cantillon/Buffalo News)

Charlie Mulloy is a SUNY Buffalo State graduate who built a career in banking. Barb Ernst Mulloy is a substitute teacher in the Clarence School District and owner of Emerging Ideas, which specializes in infographics and designing and building websites.

She began her career at the Akron Art Museum as assistant curator of education, and has been an artist, artisan and educator since the 1980s.

The Western New York natives were married on Sept. 26, 2015. Their wedding reception was held outside the barn with 150 guests and an array of performing artists, including a fire-eater. They share their home with two “torties” (tortoiseshell cats), Savannah and Cheyenne.

The house is deemed a Town of Clarence Designated Landmark by the Historic Preservation Commission. The Mulloys have tackled one project after another – including in the garden.

“We replaced almost everything,” said Charlie Mulloy, strolling the grounds and pointing out the ornamental grasses in the back and the pond and waterfalls he installed on the side in 2015.

Major undertakings indoors include having the popcorn ceiling professionally removed in the living room and stripping the second-floor doors that had been enameled white.

It was a very time-consuming, do-it-yourself project.

“I took them one by one to the barn,” Barb Mulloy said. 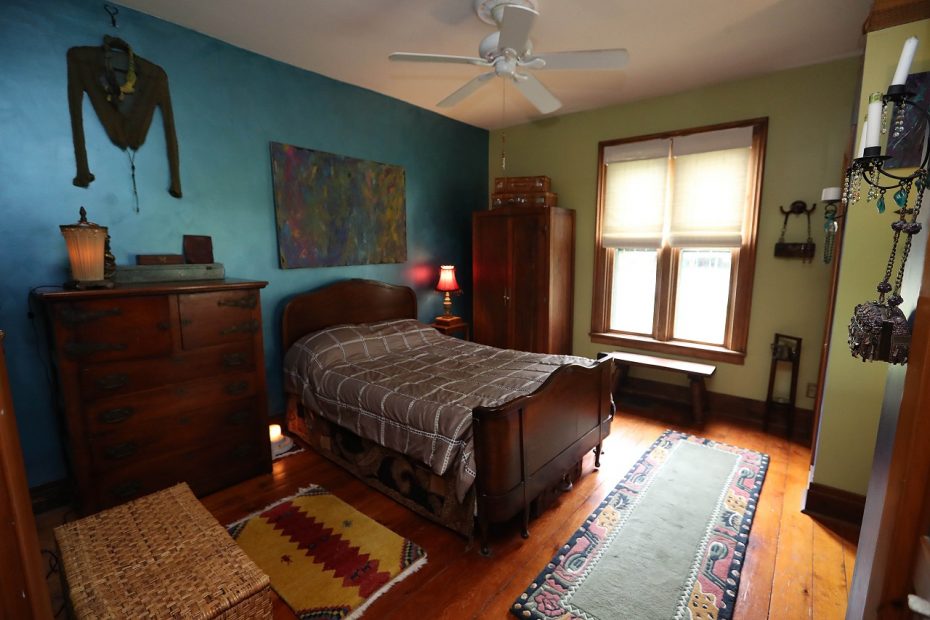 The master bedroom is painted Sherwin-Williams' Hearts of Palm along with a metallic blue hand mixed by Barb Mulloy. (Sharon Cantillon/Buffalo News)

The furnishings are primarily from flea markets, consignment shops and family members, as is much of the decor. When asked about the old sewing machines on display, Mulloy explained that her father, William Ernst, sold sewing machines at his store on Genesee Street and later Walden Avenue.

A series of sculptures on the grounds were originally part of an “art car” called “Gremlins” created by Doug McCallum for the Art on Wheels public art project in 2003 – each given a name related to a car misfortune such as Guzzle, Rust, Scratch and Dent. She bought it at auction and has repainted the sculptures.

Her creative touch is seen everywhere. Mannequin hands serve as curtain tie-backs in her art studio – a room she described as “always a wreck, but that’s OK.”

The walls in the first-floor laundry are multiple shades of blue – a look she created by throwing paint at them.

Years ago, she installed black and terra-cotta tile countertops in the kitchen and painted the walls in layers of silver, gold, bronze and copper.

And she adds embellishments to everything. “I don’t know what I would do without a hot glue gun,” she said. 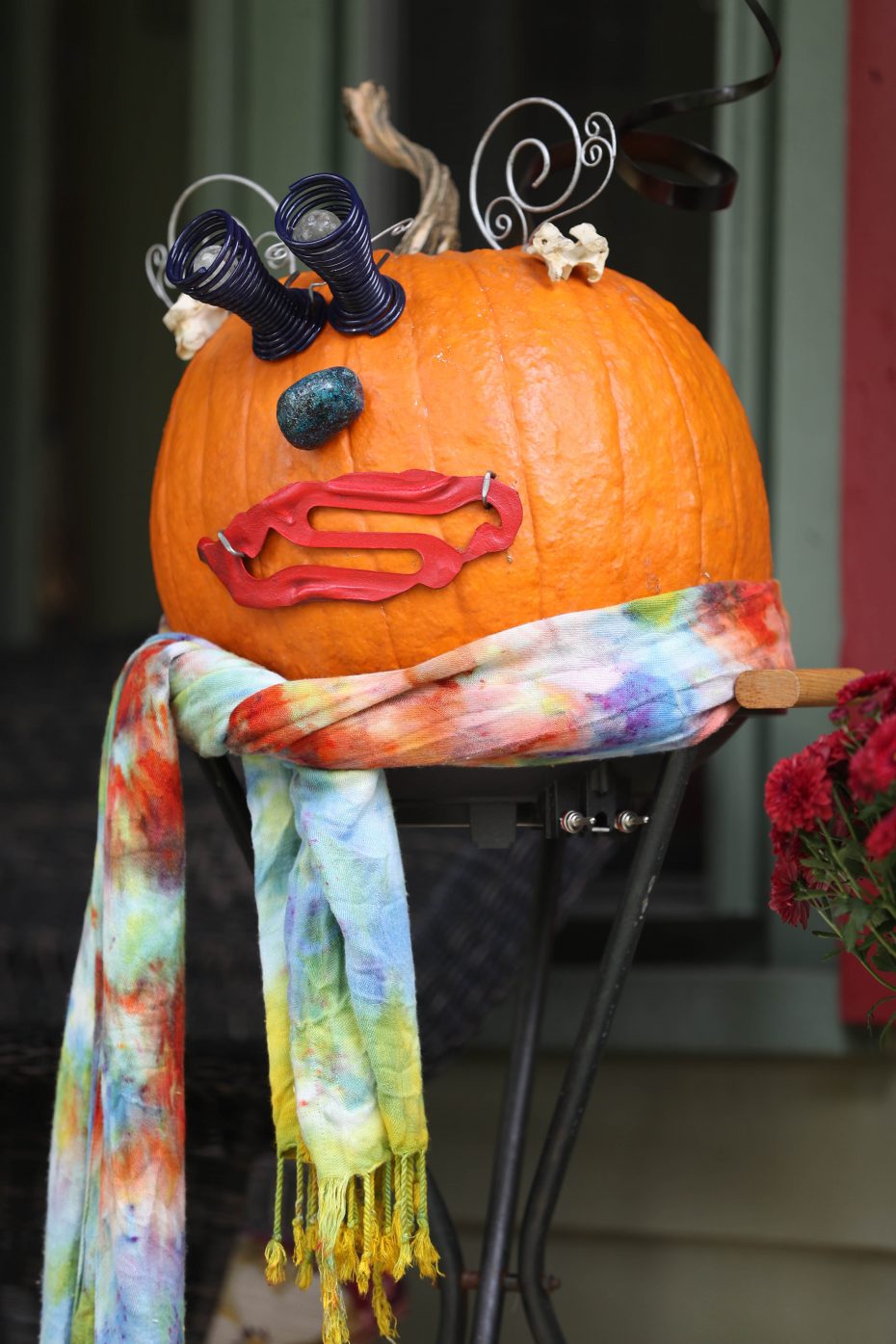 Details: The house at a glance

Layout: The first floor features a living room, dining room, kitchen, laundry, full bath and master bedroom. The Mulloys use one room on the second floor as her art studio; another as his office. The second floor also has a reading room, bath and area with cabinets and sink. There’s a basement and attic as well as a porch and barn.

Furniture: The home is furnished with pieces from flea markets, consignment stores and family members. The dining table is from Pier 1. An old gutted Laurel gas stove is now used for storage in the dining room.

Floors: Original plank floors. Newer hardwood in kitchen. Tile in the bath. Lots of area rugs, many purchased at the old FWS store. The stairs and second floor are carpeted except for the art studio and bath.

Paint colors: The exterior is painted Benjamin Moore’s Thicket with Lush trim. The shutters are Pomegranate. The interior is a combination of blues, purples, yellows, whites and greens, some hand mixed by Barb Mulloy.

Window treatments: A variety of sheers and valances on rods. Matchstick blinds in master bedroom.

Story topics: home of the month