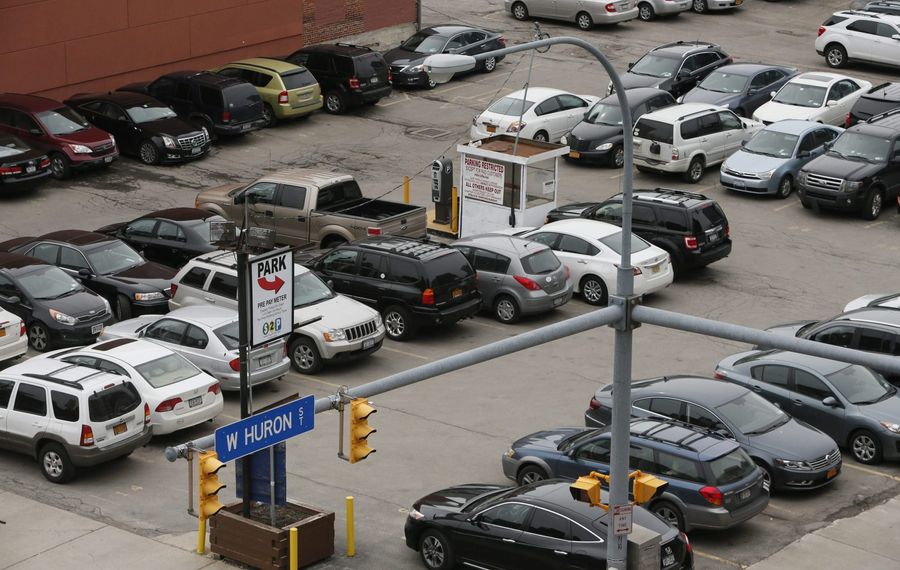 Worries about inadequate parking in parts of downtown Buffalo are rising to the surface again this week, with concerns rising about an anticipated mismatch of supply and demand could yield a gap of more than 1,100 spaces just as demand for parking is expected to rise.

As the surge in construction and development activity continues in downtown Buffalo, landlords and businesses are concerned about not having enough spaces to handle all the cars they expect to see. That, in turn, could hamper efforts to lease both apartments and office space, or even drive tenants away, they said.

"It’s going to affect businesses downtown," said Rocco Termini, owner of Signature Development Buffalo. "You’re not going to lease any space in the office buildings in that vicinity because there is no parking."

They say many of the existing parking ramps are insufficient and outdated for current needs, which are only expected to grow as redevelopment brings more residents and workers into the city. And while they applaud the conversion of surface parking into building projects as a better use of prime vacant land, they say any new construction should incorporate structured parking to replace what is taken away.

"I don’t think we should be building anything in the neighborhood without parking," Termini said to his fellow Buffalo Place directors on Wednesday. "You’re going to stifle further development."

Keith Belanger, chairman of the Buffalo Place board and a senior vice president at M&T Bank Corp., said the Buffalo-based bank has faced similar challenges. "We're looking at options right now for some growth. It's a huge, huge consideration," he said.

Buffalo's deputy mayor, Elizabeth Ball, said the city is working on some ideas, but did not elaborate and other city officials could not be reached for comment Wednesday.

Such concerns have long been a problem and topic of discussion throughout the city's core, especially amid the tension between the desire for public transit and ride-sharing versus accommodating a suburban mindset of driving. That's a radical change from 20 years ago, when the city had surplus parking downtown, and is a sign of the growth that the city has seen. 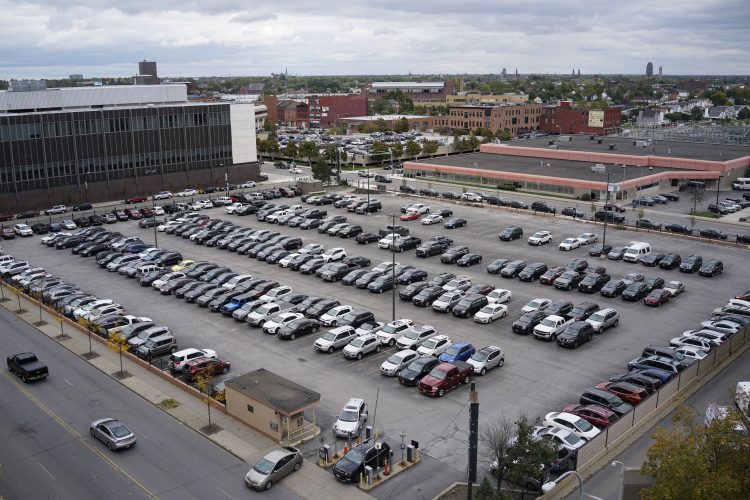 Affordable apartments and a fresh food market or unspecified grocery store are now part of the Ciminelli plan for this parking lot south of Clinton Street between Ellicott, left, and Oak, top right. (Derek Gee/Buffalo News)

The focus now is on the eastern edge of downtown. That's where developers point to the prospect of losing two big ramps and one surface lot from the public inventory over the next couple of years, as long-term city leases expire and a new development project turns an existing lot into a building.

The 1,029-space Main Place ramp, which the city has owned and is operated by Buffalo Civic Auto Ramps, will revert back in July 2019 to that building's ownership, Patrick Hotung's Main Place Liberty Group. Similarly, the 457-space ramp on Washington Street attached by skybridge to One Seneca Tower will go back to the tower's owner, Douglas Jemal, in 2021.

In both cases, the parking will still exist, but it will no longer be under the city's control, which could mean more private use by others, and potentially at higher rates.

"I’ve been yelling about this for years. There’s been no replacement of municipal parking and no forward thinking," said Carl Paladino, chairman of Ellicott Development Co. "We’re in big trouble. It means rates are going to go up and it’s going to hurt the ability to lease downtown. We already have a shortage."

Meanwhile, Ciminelli Real Estate Corp., as designated developer for the city-owned parking lot at 201 Ellicott St., is planning to construct a mixed-use building with an urban grocery or market and 200 apartments. That plan – developed in conjunction with the city – originally included an 800-space parking ramp that would have replaced the 375-space lot and doubled its capacity.

But the long-delayed project has since been scaled back and the new version announced last week now instead includes only enough parking for the store's needs. That means no built-in spaces for the 200 new tenants, who will be encouraged instead to use nearby public transportation and other means of travel, city officials and Ciminelli executives said.

Termini urged Ciminelli to "go back to the drawing board" to restore a ramp. "It’s going to be difficult for you to rent apartments if you don’t have parking," he said.

But Paul Ciminelli, CEO of Ciminelli Real Estate, said the city made that decision, and he's not eager for a reboot that would only push back the project even further. "My impression is that they recognize that there is a need, but is that the best location?" he said.

Adding to the pressure, work is continuing on the conversion of the former AM&A's on Main Street into a new 300-room Wyndham Hotel, with two restaurants and other features. That project is expected to wrap up and open in 2020.

There are also new restaurants and other housing in that same area of the central business district, especially on Ellicott. And Iskalo Development Corp. is growing its own portfolio of buildings and projects around the Electric Tower, including acquisitions of buildings belonging to Old Editions Book Shop on East Huron Street and The Arc Erie County at 101 Oak St., which will bring new tenants with more parking needs.

"Now we have a 1,100-parking space deficit in that neighborhood and nobody seems to be addressing the problem," Termini said.