When the Lodge Bar & Grill opened on West Chippewa Street in 2013, the wild-game spot—with its glistening interiors, antler chandeliers and servings of grilled pheasant – sought to heighten the expectations of a downtown stretch known more for its moonlight street brawls than its culinary bravado.

Five years later, the two-level Lodge is no more, but its address is taking another stab at changing its slice of the Nickel City landscape – albeit as the backdrop of Buffalo’s next great rock club.

Having a hard time envisioning the formerly luxurious spot as a signature city music venue among the likes of Mohawk Place, Town Ballroom and the Tralf Music Hall? You’re not alone.

“When the space was first mentioned, I didn’t think its capacity and configuration made sense for what we wanted to do,” said Chris Ring, the After Dark Presents founder and former operator of the since-closed Waiting Room. “But then we walked through, and it was beautiful.”

What Ring and business partner Dale Segal (part-owner of Encore) envisioned was an operation that could merge Ring’s experience in booking and live music with Segal’s proficiency in customer service and late-night barroom operation. They wanted to create a state-of-the-art venue to make local bands feel like rock stars; cultivate a modern destination to build on the ongoing makeover of Chippewa; and concoct a club that raises the stakes for a scene already blessed with signature stages.

What they’ve conceived is the ambitious Rec Room, now open to add to the city's roster of downtown music venues, and eager to deliver on its owners’ lofty aspirations. 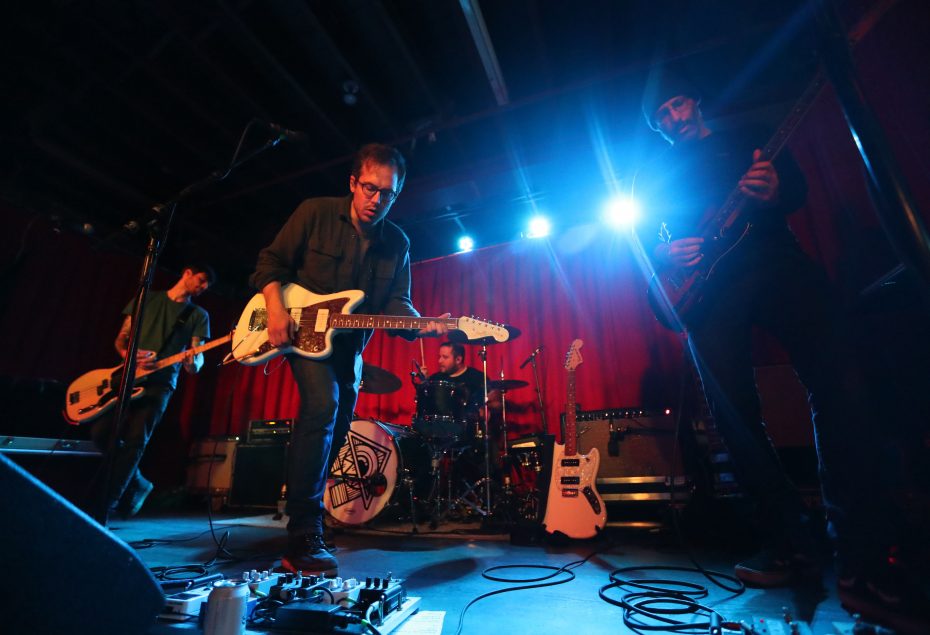 Following the unexpected closure of the Waiting Room in August 2017, Ring started scouring the city for a replacement of the Delaware Avenue space that became a bastion for local bands, touring punk and hardcore acts, and patrons keen on its popular live-band karaoke. The Rec Room, at 79 W. Chippewa St., will now fill that void, adding an all-ages venue to lure international touring acts like the Joy Formidable (Nov. 8), Shooter Jennings (Nov. 9) and the Sadies (Nov. 30), as well as a supportive space for local acts rising up the ranks.

“I got into music by being in a local band. It was a struggle, but I don’t regret it because it brought me to what I’m doing today,” said Ring. “At the same time, I don’t want local acts to go through the [stuff] that I did just so my band could play a local show.”

But as do-it-yourself as Ring’s career has been, he’s not skimping on sound or production at Rec Room. The venue has teamed advanced technological amenities with a dedicated sound engineer on the payroll, intent on providing the best product for local musicians committed to honing their craft, all while expanding the capabilities of the traditionally gritty Buffalo music scene. 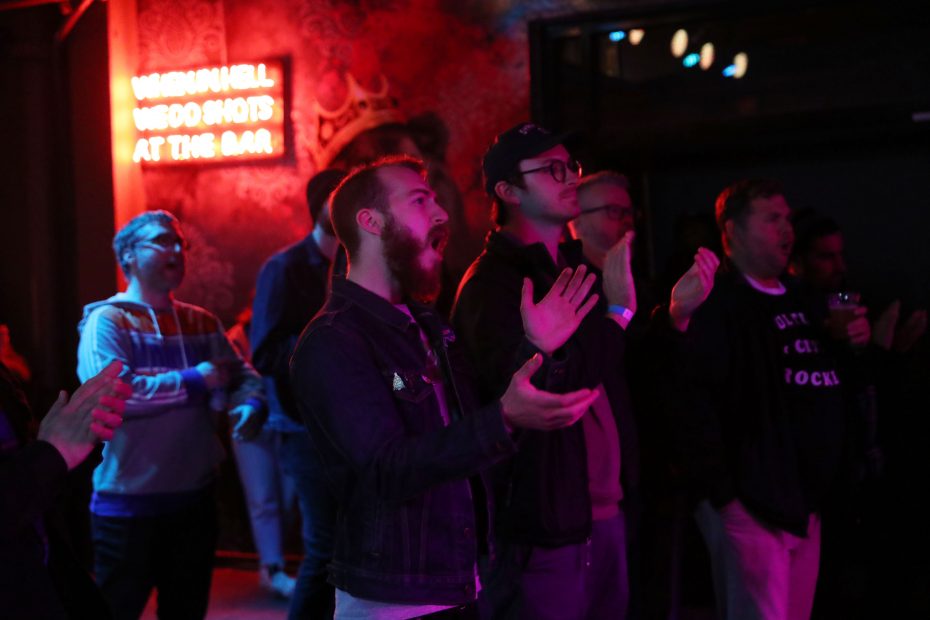 Fans get into the show at the Rec Room, a new music club at 79 W. Chippewa St. (Sharon Cantillon/Buffalo News)

Not long ago, one of the city’s most cherished rock clubs resided just down the street from Ring’s Rec Room. The sweat-drenched chaos of the Continental embodied Buffalo’s image during its tenure on Franklin Street, including shows booked by Ring. But since closing in 2005, the immediate neighborhood’s live music offerings have been mostly relegated to Tragically Hip tribute bands and visiting spins by “Jersey Shore” personality, Pauly D.

Rec Room’s arrival changes this. With its seven-nights-a-week operation – whether with scheduled shows, freewheeling karaoke or a multifaceted bar environment – it plans to be a plugged-in driver for a stretch growing past its previous iterations.

“Some of the reputation that [Chippewa] had 10 years ago, even five years ago, has gone away,” said Ring. “The Westin’s around the corner, and the block’s full of building owners invested in the district. That was really appealing to us, knowing that we have the support of our neighbors.”

Buffalo isn’t short on beloved music venues. Angelic places like Asbury Hall and Sportsmen's Tavern have become destinations for live music fanatics. Still-developing hybrid venues like Buffalo RiverWorks have introduced attendees to a different local vibe. The Rec Room, as was the case with Waiting Room, is primed to present a complementary piece of this already impressive sonic landscape, all while upping the experiential prospects of the Buffalo concertgoer.

“I’m hoping that we can be considered as one of the trendsetters with what we’re doing here,” said Ring. “We have bigger plans than simply doing a 300-capacity bar and music venue.” 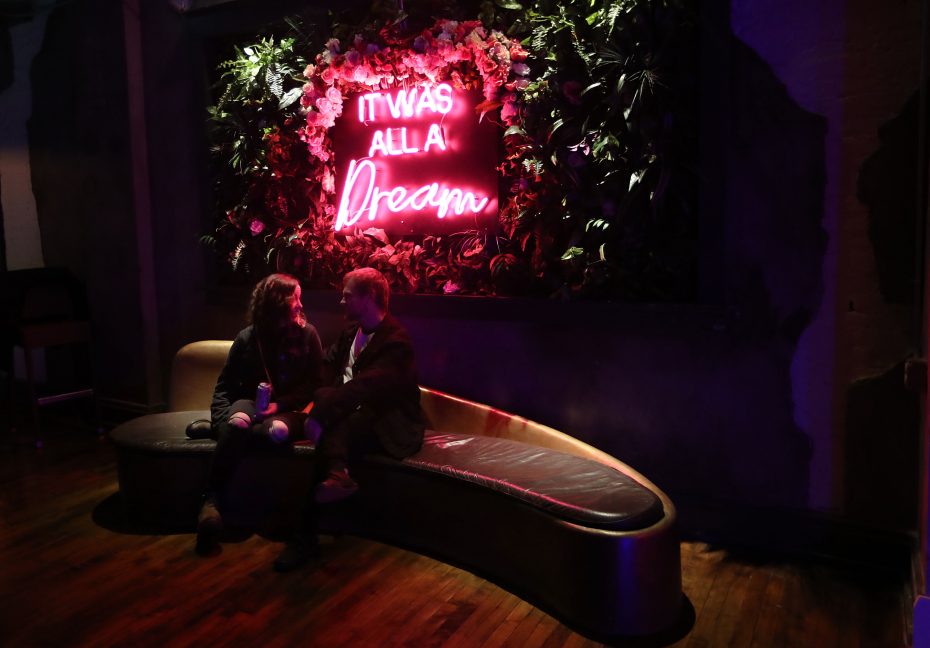 Clare Hourihan, left, and Jesse Kaufman take some time away from the stage in this cozy spot on the second floor of the Rec Room. (Sharon Cantillon/Buffalo News)

Inspired by ideas culled from clubs across the country, the two-floor building provides an expanse for guests eager for live music, as well as plenty of inventive accentuates for Instagram-ready evenings. A stairwell festooned with aromatic roses. Neon-spelled lyrics from hometown metalcore icons, Every Time I Die. And illuminated messages like “It Was All A Dream” mounted and encircled by a floral arrangement. The second floor features arcade games, a clandestine patio and a soundproofed lounge for the martini set separate from the show experience.

Here are the November concerts at the Rec Room. Tickets are available at afterdarkpresents.com, at the After Dark office at 630 Elmwood Ave. or call 893-2900.

Nov. 8: The Joy Formidable, The Eaves

Nov. 21: Cute is What We Aim For, Makeout, Minshara, Brightside