Pam Braxton sees the moment with fraternal joy. When the Buffalo Bills host the New England Patriots in today's Monday night game, Thurman Thomas will have his number officially retired.

Amid one of the greatest careers in Bills history, corresponding to the years when this city watched its National Football League team win like it had never won before, Thomas came to define the number 34.

Yet as Thomas has said repeatedly, with grace and appreciation, he was not the first to carry it in Buffalo.

Before him, there were other unforgettable 34s.

Pam’s husband, Jim Braxton, was one of them, an overpowering fullback in the early 1970s. His Bills team burst into renewed prominence, in a new stadium, after some of the grimmest years the franchise ever experienced.

To Pam, Jim was in the middle of three "34s" who encompass, almost poetically, some of the high points in team history. 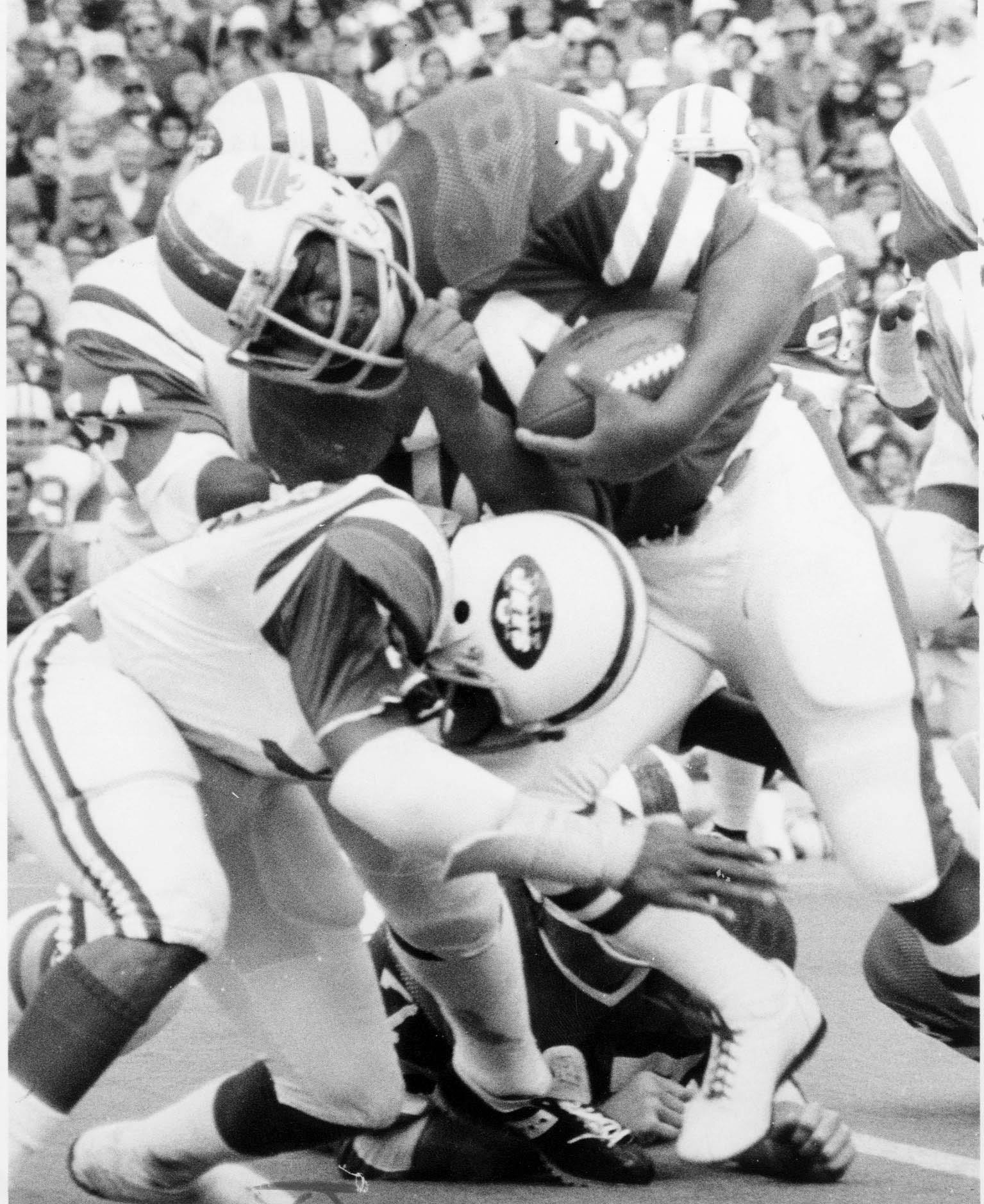 While Bills Vice President of Communications Derek Boyko said nine players wore 34 over the team’s 58-year existence, Pam Braxton captured a major part of why John Boutet, chairman of the Greater Buffalo Sports Hall of Fame, contends 34 is the greatest number in the annals of the Bills.

Cookie Gilchrist, a legendary tailback, led the Bills to their first championship. Braxton played a kind of Lou Gehrig role – selfless and irreplaceable – during the years when the Bills were identified with record-breaking tailback O.J. Simpson.

As for Thomas, he was responsible for more than 16,000 all-purpose yards. All told, that is more than 9 miles of forward progress.

To Pam, it is fitting to retire 34, to honor Thomas. She is grateful for the way Thomas represents relentless excellence, for the way his jersey is synonymous with many of the most euphoric moments in franchise history.

At the end of his career, in the same fashion as both Gilchrist and Jim Braxton, Thomas made a last stop with the Miami Dolphins before retiring - though Thomas signed a one-day contract with Buffalo in 2001 so he could retire as a Bill. Afterward, he settled on a choice that Pam finds especially moving.

“He stayed in Buffalo,” she said of Thomas. 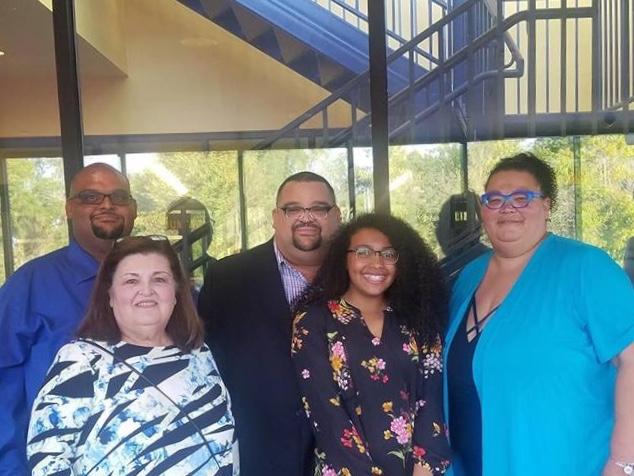 She and Jim met at West Virginia, where they were both physical education majors. He was a placekicker and the team's leading rusher as a junior, before he spent his senior year excelling at tight end – achievements that would eventually elevate him into West Virginia's Legends Society.

Jim was African-American. Pam is white. They quietly overcame difficult moments in an America that did not always welcome that relationship, "but Jim was comfortable with anyone as long as they treated him the same way," Pam said.

She and Jim loved to play pinochle and other cards games in the student union. They eventually learned bridge, a game that became their passion. Pam's hardest memories involve one decision: Years before she and Jim were married, she became pregnant, and the couple decided it was best to give up their daughter for adoption.

In the end, with shared love and gratitude, they stayed together.

The untold tale of Jim Dyson, the man who named the Buffalo Bills

Jim's dad, who died when he was young, was a Pittsburgh steelworker. Jim was also a gifted teenage baseball player, and Pam said he chose college football only because he thought it offered better prospects.

Drafted by Buffalo, Pam said Jim asked the team for 44, the number he wore in college. When it was not available he took 34 instead, the number Gilchrist wore during three memorable American Football League seasons in Buffalo that culminated in a Bills championship.

A number, as Pam put it, can be a “kind of psychic thing.” If Simpson’s 32 was identified with elusive speed, Braxton and his 34 were beloved for different reasons. While he was all about power with the ball – he gained 823 yards for a 1975 Bills team that led the league in total offense – his primary role was as a blocker and as a kind of field general.

“Jimmy Braxton was one of the smartest players I’ve ever seen,” said Ed Abramoski, the Bills trainer who witnessed all the great eras for the team. When Braxton died at the then-Roswell Park Cancer Institute at 37, from lung cancer, many of his teammates recalled him as unflappably cerebral, a guy who served as an emotional anchor in the huddle. 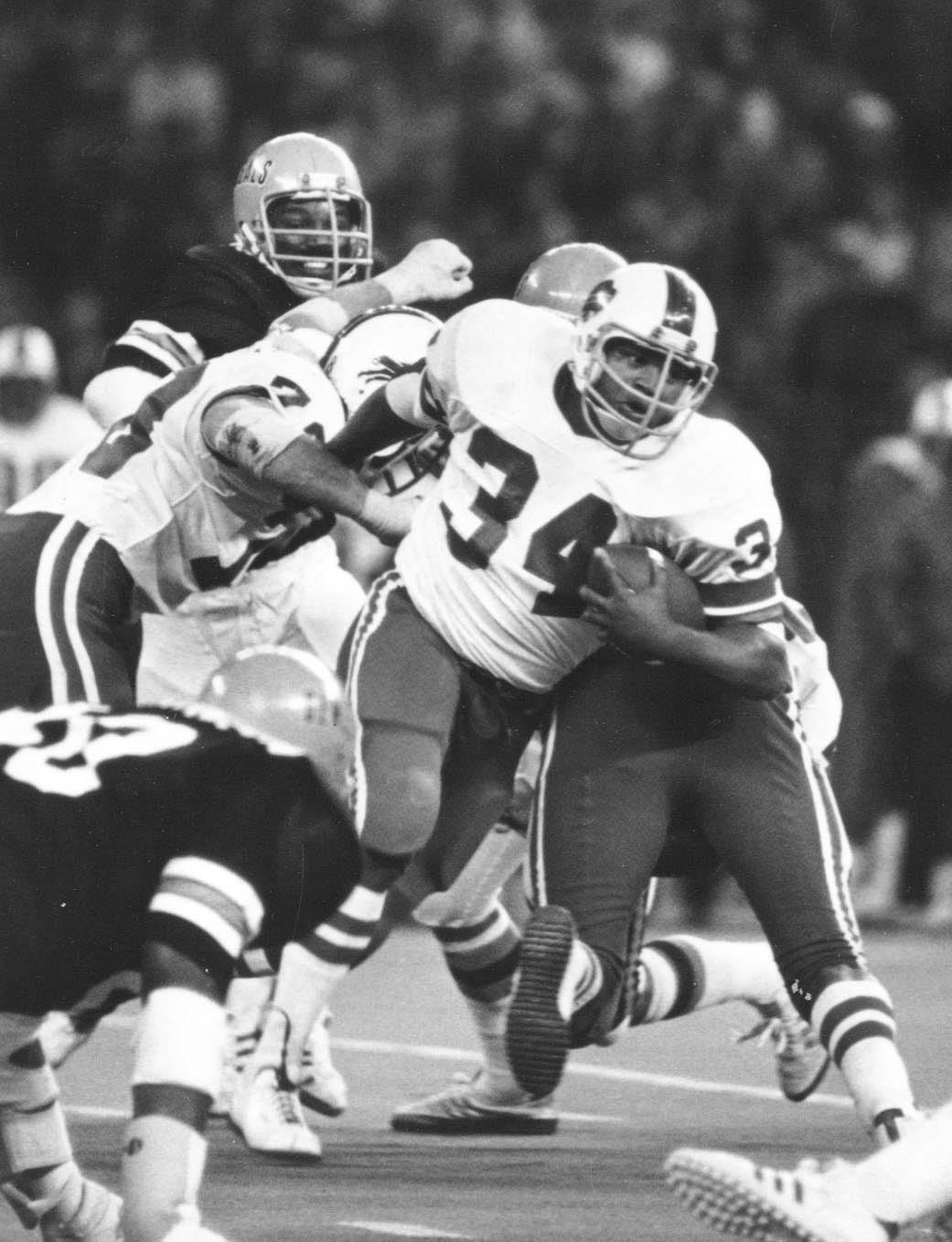 Simpson, the backfield partner who credited many of his record-breaking yards to Jim's blocking, would go on to high-profile tumult that can overwhelm other memories from that era: Tried and acquitted under a global spotlight for two murders in California, he later served nine years in a Nevada prison on charges of robbery and kidnapping.

After a knee injury shortened his career, Jim Braxton remained in Buffalo, leading a quiet life. “This became home to us,” Pam said.

She worked as an assistant loan officer in the mortgage department at a bank. Jim was a property manager who, for a time, commuted to Syracuse. Certainly, Pam cannot forget how cheering crowds of 80,000 responded to her husband on crisp autumn afternoons.

But the years she most powerfully associates with Jim involve the era when he was a dad to their two sons and a quiet volunteer in the community. She said their family was like any other family, routinely gathering for weekend nights of board games at their house.

She remembers when Jim coached Little League baseball, still almost entirely an all-boys pursuit, and a girl in the area wanted to take part. Not everyone was welcoming. Jim was. The child thrived.

Not so long ago, the young woman contacted Pam, and told her that she named her son “Bubby.”

In a moment Pam especially wishes Jim had lived to see, she reunited in 1997 with their daughter, who had been adopted. Pam and her sons are now in regular contact with Jennifer Presar, a professor at Southern Illinois University.

When they get together, they share stories of Jim Braxton.

"He was a true gentleman," said Leon Gresham, a longtime barber at the Metropolitan Style Shop on Jefferson Avenue who recalls Jim as one of many Bills who used to get their hair cut at the shop.

For Thurman Thomas, retiring '34' is 'right up there' with the Hall of Fame

It has been more than 30 years since his death from cancer at a young age. Sometimes, Pam said, older fans will approach her when they hear her last name and ask: Could you be Jim Braxton's wife?

They remember that 1970s incarnation of 34, even if fans born years later do not. Pam said family friends still use "34" in passwords or as part of email addresses. Certainly, all of it will be on her mind as she settles into her living room to watch the ceremony for Thomas.

“I respect Thurman so much,” Pam said. She admires his work in the community, the way he has spoken openly about his family's struggles with mental health, the way he remains a presence in the city.

The number 34 means as much to the widow of Jim Braxton as to anyone in Buffalo, which only gives added power to this blessing for the guy who will take it home for good.

Sean Kirst is a columnist with The Buffalo News, who notes that - according to Derek Boyko of the Bills - these players wore 34 for the team: Cookie Gilchrist, Don Stone, Allen Smith, Gene Donaldson, Bubba Thornton, Jim Braxton, Booker Moore, Gary Wilkins and Thurman Thomas. You can email Kirst at skirst@buffnews.com or read more of his work in this archive.