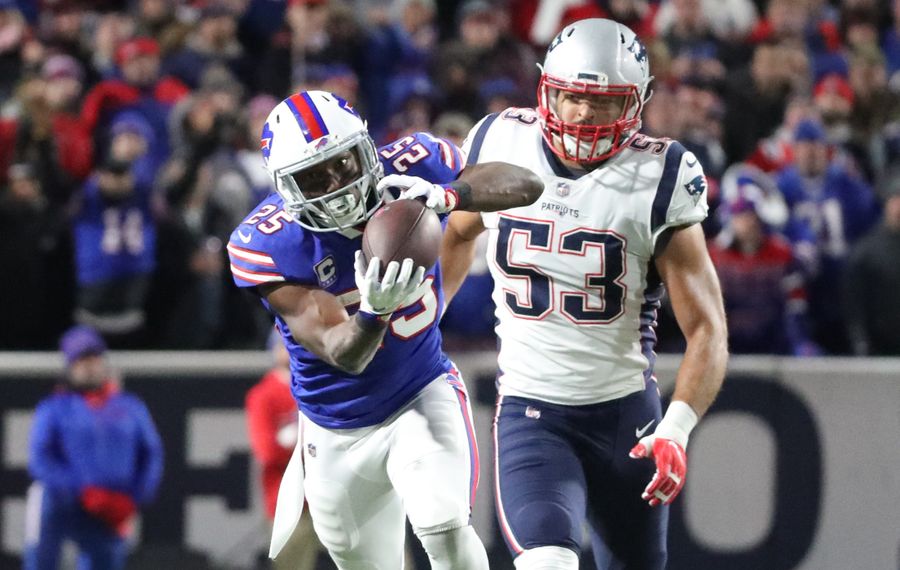 Matchup watch: The New England Patriots played a five-man defensive front in the first quarter against the Buffalo Bills’ running formations, with three big defensive linemen on the inside and two outside linebackers on the edges. New England had to adjust. Normally big linebacker Dont’a Hightower is on the edge in that front. He was out with a knee injury. John Simon, a sixth-year veteran, took his place.

Lineup changes: With rookie running back Sony Michel (knee) out, the Pats threw a new wrinkle at the Bills, using receiver Cordarrelle Patterson as a running back in the first quarter. Right tackle Marcus Cannon (concussion) was replaced by LaAdrian Waddle, a notable step down.

No benching: There were reports Pats receiver Josh Gordon would be benched for the start of the game due to tardiness. It didn’t happen. Gordon was on the field plenty early.

Early TO: The Bills had to call time out on the Pats’ second drive because they had only 10 men on the field.

Zebra report: A fumble on a kickoff return by Marcus Murphy was overturned on review. The ground forced the fumble.

Slowing them down: The Pats had scored 21 points or more in the first half in four straight games. Five would have been a team record. The Bills prevented it.

Slow starters: The Bills have been outscored in the first half this season, 119-43.

No momentum: Nine times previously this season, Pats foes held the ball in the final two minutes of a half or the game. All nine times the Pats’ defense held them without scoring. The Bills managed a field goal with 1:39 left.

Zebra report: Fans wanted an intentional grounding call on Brady early in the quarter after he was hurried and threw at the feet of his center, David Andrews. The referee ruled he was outside the tackle box, arguably the correct call. ... The Pats were flagged for an illegal kickoff formation. They didn’t have two men outside the hash and between the numbers.

Second guess: On a third-and-8 play from the Pats’ 30, the Bills played conservative and handed off to LeSean McCoy for a draw play. The Pats stuffed it.

Key stand: The Bills forced the Pats to settle for a field goal after they took over at the Buffalo 29 on a sack and fumble recovery.

Matchup watch: Stephon Gilmore vs. Kelvin Benjamin. The Pats ask Gilmore to play man coverage on the opposition’s top wideout week after week. The former Bills corner is having a standout season, showing why the Pats gave him a contract worth an average of $13 million a year in the 2017 offseason. Benjamin beat Gilmore for a 40-yard gain early in the third quarter. Three plays later Gilmore defended an out route to force a Bills punt. Gilmore was following Benjamin most of the night.

Key injuries: The Bills lost linebacker Tremaine Edmunds to a concussion late in the second half, and he was replaced by Julian Stanford. It was his first defensive action of the season. The Pats lost linebacker Elandon Roberts for two drives to a groin injury but he returned. Pats star guard Shaq Mason went out with a calf injury.

Haush-money: The Bills got a 51-yard field goal from Stephen Hauschka. It was Hauschka’s 10th field goal of 50-plus yards with Buffalo. 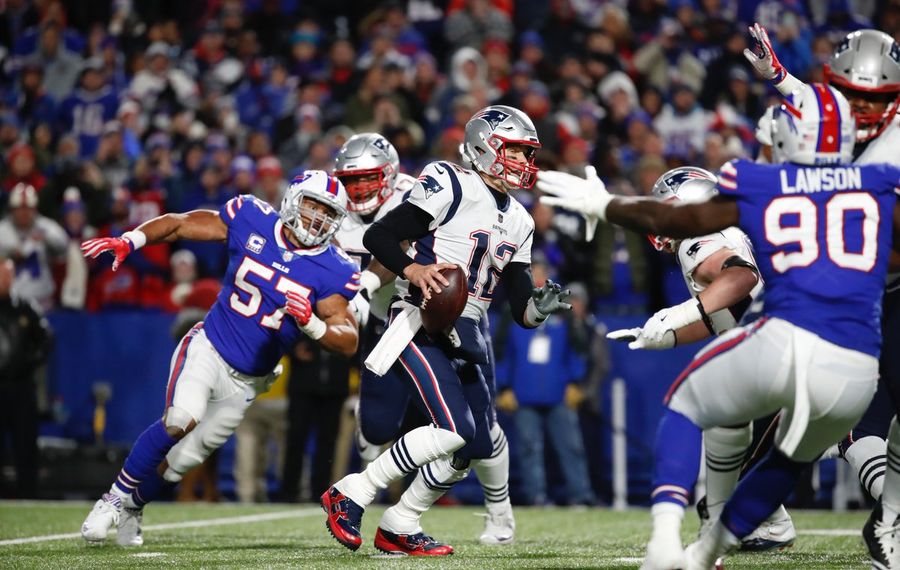 Theme: The song remains the same.

Mr. Orchard Park: Tom Brady now is the winningest quarterback at New Era Field this millennium. He improved to 15-2 in Orchard Park. Drew Bledsoe is second in wins in the stadium since 2000 with 14. Brady is the third winningest QB ever in the stadium, behind only Jim Kelly (59 wins) and Joe Ferguson (46).

TD Tom: Want more? We know you don’t but this also is remarkable: Brady has 38 TDs at Orchard Park. The most by a Bills QB since 2000 in Orchard Park is Ryan Fitzpatrick with 37.

Who’s your daddy? Brady improved to 29-3 overall against the Bills, the most wins by a QB against a single foe ever. Brett Favre is second on the list, with 26 wins over Detroit. Brady has 10 300-yard games against the Bills.