The 10-foot-wide stretch of gray pavement that runs a little more than a mile doesn't seem like much on its face.

But the newest section of Shoreline Trail, which does not run along the shore but down the eastern boundary of the old Bethlehem Steel property, is one of the first modest signs that public investment in the old steel plant property is paying off.

Erie County completed the purchase of roughly 150 acres of Bethlehem Steel property at the end of last year. Monday marked the official opening of part of the $1.8 million Shoreline Trail extension along the county-controlled land. It also marked the groundbreaking of the Dona Street extension, the first public road ever constructed on the former Bethlehem Steel site.

And any opportunity public officials have to celebrate the gradual rebirth of the Rust Belt icon is one that officials are going to take.

"Wow, I cannot believe this is finally happening," said Lt. Gov. Kathy Hochul at the blustery and muddy news conference along the new trail. "We're going to get this done so that the next generation will never know how bad it got. They'll see a bike path and public access and new industry."

County Executive Mark Poloncarz, a Lackawanna native and son of a Bethlehem Steel worker, said the $2.2 million county-funded extension of Dona Street will become a key to unlocking future private development on the giant parcel.

"This is a small part of the overall vision for this site," he said of the new trail. "Once we get Dona Street open, I know you're going to see economic development at the site because we're talking with developers. As soon as we open it up for productive use, they will come. Trust me." 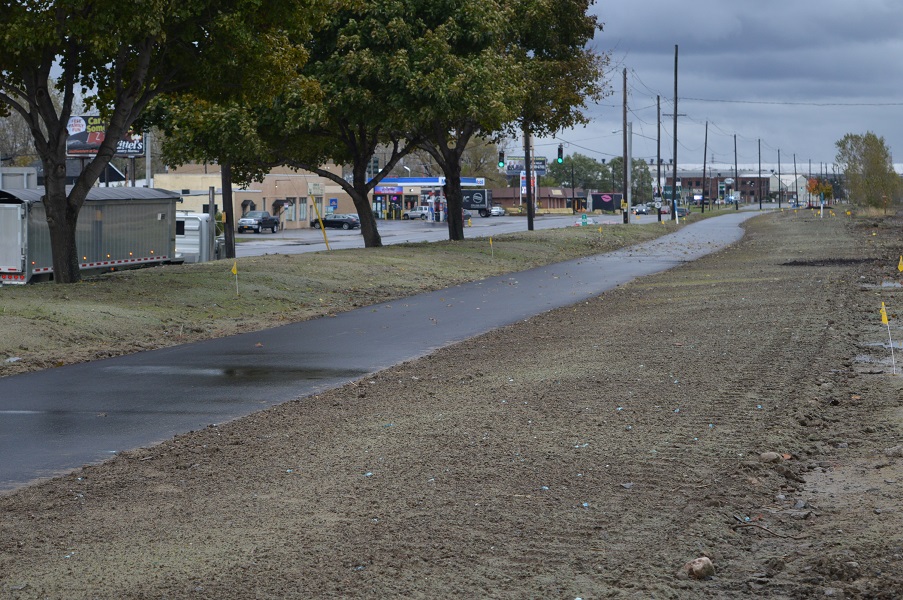 The Shoreline Trail, funded with federal, state and local tax dollars, will eventually include new trees, benches, public art and interpretive signs. The next phase of the project would extend the trail to Woodlawn Beach State Park in Hamburg.

Poloncarz acknowledged that the opening of a new trail is not a giant accomplishment when measured against the long fallow industrial parcel that the trail runs along. But it's a start.

"It sends a message to the greater community that this site is not going to be abandoned forever," he said, standing under a small, crowded tent with other city, county and state leaders. "There are a lot of people who said it could never be done. The people under this tent believed it could be done, and we're here today to say it will be done."

Click on this interactive map to see how the new section of Shoreline Trail and Dona Street construction fits into ongoing redevelopment plans for the Bethelehem Steel site: