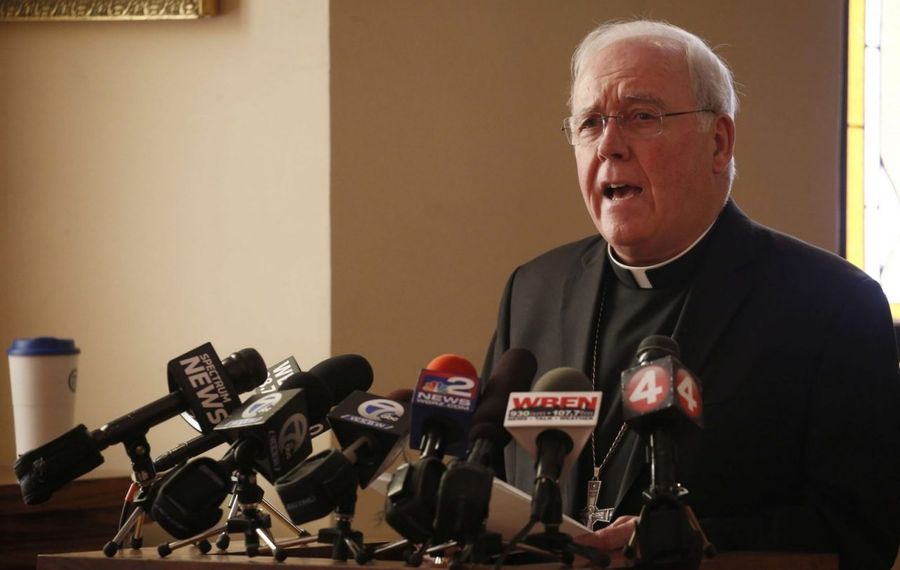 If Buffalo's Bishop Richard J. Malone thought silence is the way to treat the prestigious CBS news magazine “60 Minutes,” he was sadly mistaken.

The “60 Minutes” story Sunday about the alleged sexual abuse by priests in the Buffalo Diocese over decades was as powerful as could be and even more.

And the three people being interviewed were exceptional detailing their stories, their motivation for coming forward and the outrage that resulted from the revelations.

Their stories were so powerful they practically demanded answers from the Buffalo bishop.

By declining to be interviewed for the program, the bishop looked weak. His written statement explaining why he didn’t participate also showed that he needs to better understand journalism or be better served by someone advising him who does know journalism.

In his statement to “60 Minutes,” the bishop emphasized recent policies aimed at responding to the past problems weren't going to be addressed by the program.

He added in part: “It is clear to me and my staff that your roster of interviews did not include those who are aware of the full extent of the efforts of our Diocese to combat child abuse. Nor does it include those who urge me every day to stay the course and restore the confidence of our faithful.”

He continued: “Finally, although I have respectfully declined your invitation, I have sat for hours of interviews with highly-regarded local journalists – a newscaster and a reporter for our daily paper – so that our message can be distributed locally.”

In other words, Malone wanted a more balanced story about what is going on now when "60 Minutes” understandably was more interested in reporting about the horrors of past practices than putting a positive face on what is being done now.

In the eyes of “60 Minutes,” Malone declined to be the balance he was looking for.

His apparent view that sitting for hours with highly regarded local journalists was enough just didn’t cut it.

While the “60 Minutes” piece included many of the details unveiled by WKBW-TV (Channel 7) reporter Charlie Specht and this newspaper, the TV program also included new information that could have and should have been addressed by the bishop.

Malone should have been advised that facing an interview with a tough but fair national reporter could have gotten him more respect than the one he did last week with WIVB-TV (Channel 4) anchor Don Postles.

That is especially true since after the eight-minute interview ended, Postles revealed that he is a member of the bishop’s Council of the Laity. That’s a journalistic conflict of interest even if Postles’ heart was in the right place.

I asked Channel 4 News Director Lisa Polster via a text when she became aware of Postles being on the committee. She hasn’t answered, suggesting she is aware the conflict looks bad even if Postles had looked tough.

In the Channel 4 interview, Postles acted tough in his narration. His toughest moment came when he prefaced one of his questions this way: “As a father, I can’t imagine if any of my children were abused by a priest, the rage I could feel and the anger.”

But overall, Postles acted tough while being much less than that. He didn’t follow up on some statements by the bishop that “60 Minutes” most likely would have addressed with him.

That includes the bishop telling Postles that “with honesty and a totally clear conscience, Don, and to everyone else I have never, ever knowingly and intentionally left a priest in ministry that I knew had abused a child or moved him to another assignment or left them in the ministry ever.”

Malone followed that by telling Postles that he tried to handle allegations against priests dealing with adults quietly “unless it was something really egregious.”

The best way that Malone could have handled the difficult situation of being the focus of a “60 Minutes” report was to face a difficult cross-examination by Whitaker even if it meant some follow-up questions ignored by Postles.

Of course, O’Connor, the pastor and the deacon would have been tough interviewees to follow because they all were so sincere and articulated their positions so well.

A deeply religious former administrative assistant to the bishop, O’Connor’s piety and reasons for coming forward were admirable.

O’Connor noted she was “most alarmed” at the handling of the Rev. Art Smith, who wasn't on the released list of 42 priests accused of sexual abuse allegations despite church records showing a complaint against him in 2013 by two young men and Smith being sent to counseling two years earlier “after repeated contact with an eighth-grade boy that included unwanted attention and Facebook messages.”

“Our previous bishop had removed him from ministry, so I always thought it was odd that Bishop Malone had reinstated him when I explored his file more in depth, that might have really been the moment when I knew that I had to do something with this information,” O’Connor told Whitaker.

In another chilling moment, O’Connor revealed that she was disturbed by the handling of the Rev. Fabian Maryanski, whose file included a 1980s accusation that he had sex with an underage girl. His absence from the list appeared to be a cover-up of a previous cover-up.

When O’Connor read “we did not remove him from ministry despite full knowledge of the case, and so including him on list might require explanation,” she had a strong reaction.

“And I remember thinking, if that’s their rationale for leaving a priest off, then how can I abide by this?” she told Whitaker.

As impressive as O’Connor’s detailing of the alleged cover-up was, the most devastating sound bite came from Zilliox in an exchange with Whitaker after he told the reporter that several abuse allegations should have gone to Rome but didn’t.

Whitaker: “How many of those priests should have been taken out of priesthood?”

Zilliox: “I would argue at least eight or nine.”

Whitaker: “How many of them still are in the priesthood here in Buffalo?”

Whitaker: “All of them?”

Zilliox: “All the guys that should have been removed from the priesthood are still priests.”

Malone surely will be asked about that by local reporters this week – if he is willing to face them.