When Chris Collins suspended his congressional re-election campaign in August after federal prosecutors charged him with insider trading, he watched and waited as Republicans struggled to find a ballot replacement.

Party honchos in the eight-county 27th District were plying uncharted legal waters; nobody had ever faced the same circumstances at such a late date.

But when Republicans could not guarantee that their replacement candidate would survive the expected court challenge from Democrats, Collins began reconsidering.

He now insists the decision to resurrect his suspended candidacy did not stem from self-interest and the potential negative impacts on his criminal trial slated for 2020. Nor did his decision hinge on any compulsion about returning to Washington.

He says he simply was not sure the replacement process — stretching over five weeks while election lawyers wrestled with the situation — would work. Rather than gambling on protracted litigation that might not be settled until just before Election Day, Collins says he rejoined the fray to protect the seat for the Republican Party.

And even though a well known replacement would probably encounter little difficulty in New York’s most Republican congressional district against Democrat Nathan McMurray, the congressman contends he could not take the chance.

“I was certainly naive in thinking this would be a clean-cut process of getting off the ballot,” he said a few days ago. “Then I learned the truth. No one in New York State had ever been replaced [in similar circumstances]. So this slam-dunk, easy-peasy process turned out not to be so.

Running for re-election while facing criminal charges is tough, but not that rare

“Any thought I did this to protect myself is nonsense,” he added.

Now, instead of a new candidate making the case for President Trump in friendly GOP turf, the congressman faces a tough fight. He acknowledges the situation — that his formerly loyal supporters may choose McMurray or sit out the election rather than vote for a politician under indictment and even facing possible jail time — is not "ideal."

But he insists that he will be acquitted at trial, that he can remain effective even while facing felony charges, and that his re-election assumes crucial importance as Democrats pose a real threat to assuming control of the House of Representatives.

“That means every seat matters,” he said, adding he aims to “protect the seat, protect our majority, protect the president.”

And he pledged to serve a full term, despite speculation he might win re-election and then resign, allowing the GOP to name a less controversial Republican who would run in a special election in deep-red NY27.

“I’m really putting in the effort to run and then not serve?” he asked. “Are you kidding?”

Back on Aug. 8, a federal grand jury in Manhattan indicted the Clarence businessman and former Erie County executive on 11 felony counts. 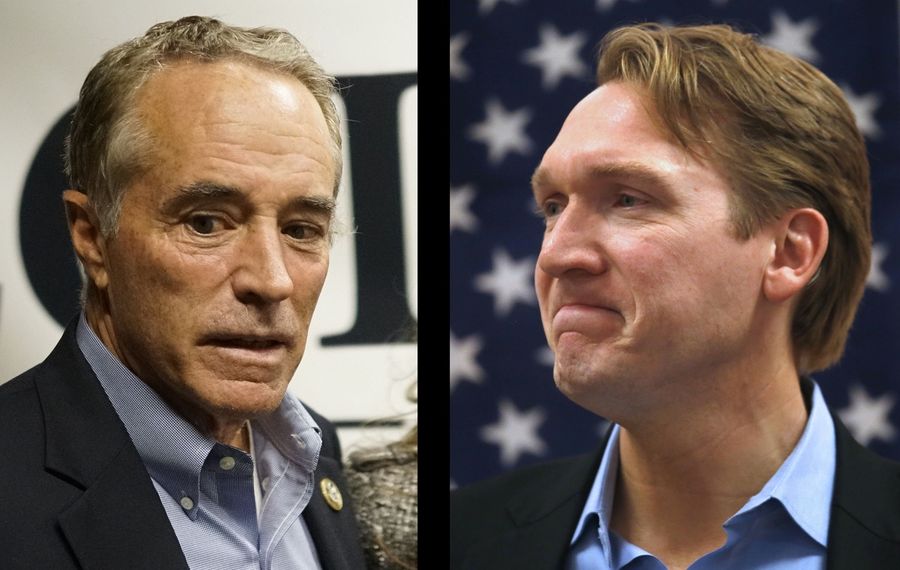 The congressman served on its board for years until this spring.

After the indictment, GOP strategists eyed Collins’ home turf of Clarence as a safety valve. According to several sources at the time, plans called for a Clarence Council member to resign, creating a vacancy. Collins would then be nominated by a friendly minor party for the Clarence post, creating a congressional vacancy and clearing a path for a heavily favored Republican. Names like Erie County Comptroller Stefan I. Mychajliw Jr., developer Carl P. Paladino and State Sen. Robert G. Ortt entered the discussion.

Those same sources indicated the plan was set to take shape right after the Sept. 13 primary. But Republican leaders said they were blindsided on Sept. 17 when Collins announced that upon the advice of his attorneys, he would resume his campaign and their never-disclosed replacement choice would be idled.

In the meantime, Democratic election lawyers were preparing a suit that charged the replacement scheme was cooked up to benefit the GOP, resulted only from Collins’ indictment and constituted fraud.

So didn’t Collins’ decision stem solely from the new threat posed to the defense of his criminal charges?

“I certainly talked to my criminal defense attorney,” Collins now says. “I wanted no part in a lawsuit, being deposed and charged with fraud.”

But he insists he recognized a growing potential for losing the seat. Nobody, he said, could say their legal strategy would work.

“I asked ‘Can you guarantee that this will be upheld?’ ” he said. “They said no. The advice I got was that we might lose. So the best way was be ‘all in’ with six weeks to go.

“It was the right decision, because we will win re-election,” he added. “If it was a three-week sprint, we might not win.” 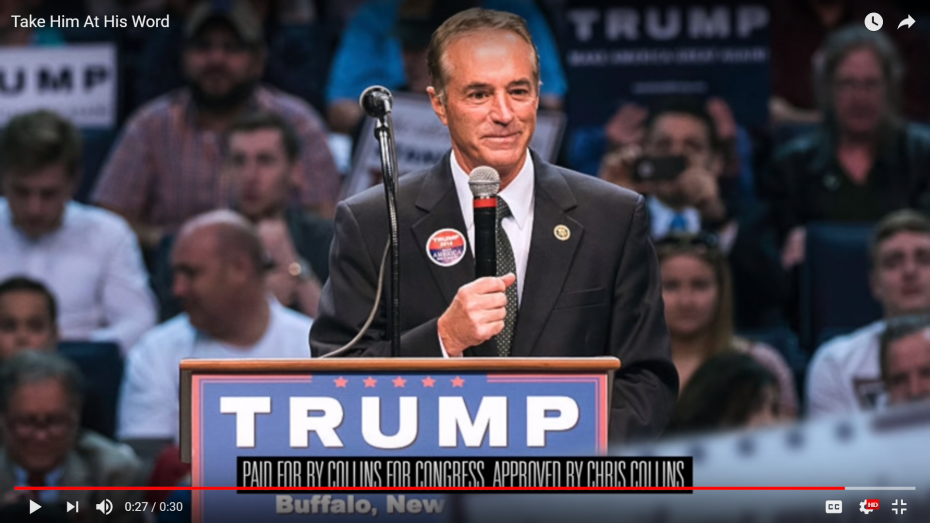 Rep. Chris Collins' decision to re-enter the election after his indictment caused consternation within the local Republican party and beyond. Here, he in a campaign ad. (Via YouTube)

Collins also said he will not offer his seat as a “bargaining chip” in potential plea negotiations, acknowledging little leverage if prosecutors felt they had a strong case and he would be expelled from the House upon conviction anyway.

At the time that Collins resumed his campaign, Republican strategists on the verge of implementing their replacement plan appeared shocked. Erie County Republican Chairman Nicholas A. Langworthy expressed his feelings in diplomatic code: He was “disappointed.”

Collins had thrown the leaders “a curve ball.” The path to replacing him on the ballot was “crystal clear.”

“You can’t help but feel like a jilted groom at the altar,” he said then.

On Friday, after Collins claimed he resumed the campaign because of legal uncertainties and not to aid his defense, Langworthy remained diplomatic.

“I disagree with the congressman’s assessment,” he said.

He demurred when asked to elaborate.

“I think that says everything,” he said.

Now Collins has resumed full campaign mode. He spoke a few days ago about visiting a nursing home in Livingston County, where residents embraced his candidacy and encouraged him to beat McMurray. He faces a challenge, especially after a Siena College/Spectrum News poll shows McMurray within the margin of error — 46 to 43 percent.

The congressman, ready to leave the House just a few weeks ago, must now convince his constituents that he can remain effective. After he resigned assignments to key committees like Energy and Commerce, he insists he can still do the job.

“I’m going to be in Congress,” he said. “I’m not going to miss any votes. I will meet with constituents, different organizations will come into my office. My job will be the same as ever.”

He said he will still “follow” House committees, and hopes to regain his assignments after the election.

“I would make the pitch that I was re-elected in an open environment and would like to be back on the committee,” he said. “It may or may not work out.” 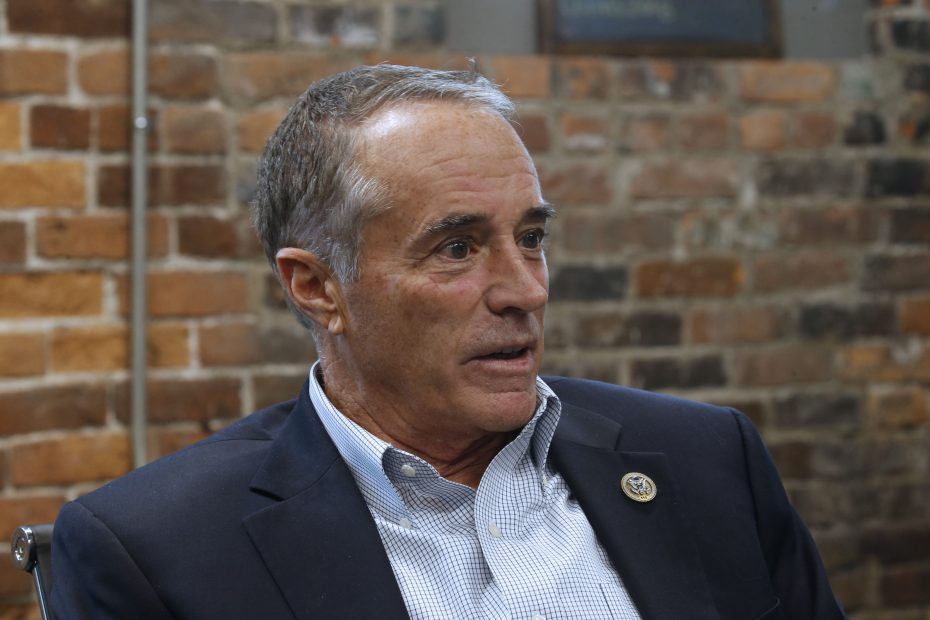 While Trump once referred to Collins in a tweet, he has been largely silent about the first member of Congress to support his presidential bid; the same Collins who seconded Trump’s nomination at the 2016 Republican National Convention and who made hundreds of television appearances on his behalf.

“I don’t want to be a distraction in any way to what the president is doing,” he said. “I know he’s aware of my situation. I’m dealing with it.

We’re going to win this election and I will continue to support him.”

While Collins remains confident that he will be proven innocent in court, he could still face action by the House Ethics Committee on different but related concerns.

He says that inquiry has been pushed aside and “will not see the light of day again,” and he expects it to end upon his exoneration.

The committee, however, voted in September to ramp up a probe that could result in Collins’ expulsion from the House after completion of the federal criminal case. The Ethics Committee voted unanimously to set up a Special Investigative Subcommittee to review the allegations against Collins and determine if they warrant the House taking action against him.

But at the request of the Justice Department, both the Ethics Committee and the investigative subcommittee agreed to delay any work on the probe until the conclusion of the criminal case.

Collins also faces a separate inquiry by the Securities and Exchange Commission, which faces a lower burden of proof than a criminal court in its civil complaint against Collins.

“I haven’t really thought about that,” he said of the SEC action.

The long and winding district: A trip through New York's 27th

Now Collins seems to have resuscitated his well-documented competitive spirit; the same drive that made him a successful businessman and one of the wealthiest members of Congress. He did not debate McMurray, but is criss-crossing the district at Republican-friendly stops, driving home the point that the loss of his seat could spell the difference between Republican or Democratic control of the House.

After representing the district for six years, he said he knows it remains deeply Republican and intensely loyal to Trump. He points to the tax cut, new farm bill (which attracted no Democratic votes), improved relations with North Korea, and two new conservative justices on the Supreme Court. Trump has delivered all he promised, Collins says.

“All that crashes and burns if Nancy Pelosi takes over,” he said.

He expresses pride in congressional accomplishments such as his Firefighters Cancer Registration Act, which established a national database for firefighters seeking help to battle diseases incurred on the job. His television ads, meanwhile, zero in on McMurray, painting him as “to the left of Bernie Sanders, liberal, radical, socialist.”

He points to an “F” rating for McMurray by the National Rifle Association, and claims his opponent is open to impeaching Trump and opposed to tax cuts. He links him at every opportunity with Gov. Andrew M. Cuomo, who he said remains unpopular in the district.

“You put that all together, and he’s opposed to everything that Trump stands for,” he said. “And this is a Trump district. He’s 180 degrees out of sync with NY-27.”

“My goal,” he added, “is to keep this seat Republican.”