The children's museum coming to Canalside isn't expected to open its doors until April, but preliminary work on the seven play zones is well underway.

If things go as planned, kids at Explore & More — Ralph C. Wilson Jr. Children's Museum will be enjoying hands-on, immersive and imaginative activities as they learn about regional history, different cultures, construction and other things. Among the activities:

• Kids will learn how water generates electricity from a two-story waterfall.

• They will be immersed in Buffalo sports in a mini-Memorial Auditorium.

• And they will learn how to grow foods and take produce to market in an immersive farm.

"It is a very purposeful exhibit design that is all about telling our story, the Western New York story," said Michelle Urbanczyk, the museum's chief executive officer.

"What I am most excited about is the learning engagement and allowing kids to use their creativity through a lot of unstructured play," she said. "We want kids to find their own path of what they have an interest in."

The exhibitions will begin moving into the four-story, 43,000-square-foot building in December, while the building is still an active construction zone. The first exhibit to arrive, "Moving Water," is expected to take three months to install.

Here's a sneak peek of what will be in the museum. 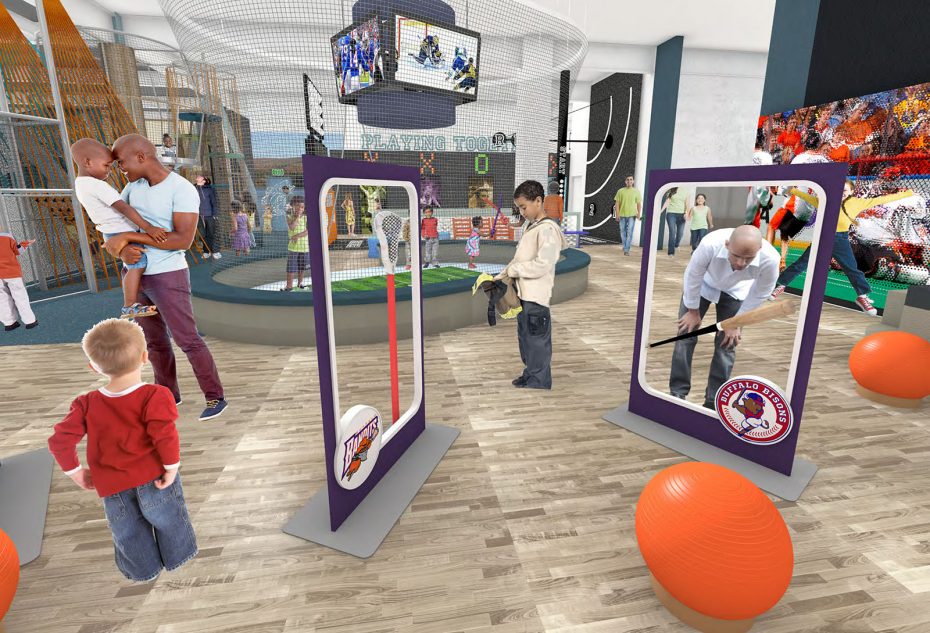 A miniature version of Memorial Auditorium is included in the museum's design.

Entrance to the museum will be on the second floor. That's where the admission desk will be, along with a soon-to-be-announced retail shop and two exhibits — "Moving Water" and "Being Good Neighbors."

The lower level, on the path that runs along the canal, will house the Low Bridge Cafe operated by Be Our Guest, the Rich Products Corp. affiliate that operates Canalside.

The first space kids are likely to step into is "Being Good Neighbors, " which will introduce children to an array of immigrant families in Western New York, while celebrating shared connections.

In the first six months, kids will be able to explore replica homes representing Seneca Nation, Yemen and Puerto Rican cultures, with other ethnic groups to follow.

Also in the exhibit is a puppet theater and an activity that allows children to color a car, manipulate it on a screen and print a 3-D vehicle made of paper.

Also on the floor is "Moving Water," which is intended to recall Niagara Falls, the Erie Canal and the engineering that went into harnessing water.

A two-story waterfall that drops into a water table will help kids learn about the canal system. A kid-powered water wheel will demonstrate how moving water creates electrical power. Kids will be able to climb into a packet boat from canal-era days and manipulate a crane and pulley system.

Most of the exhibition spaces will be on the third floor. 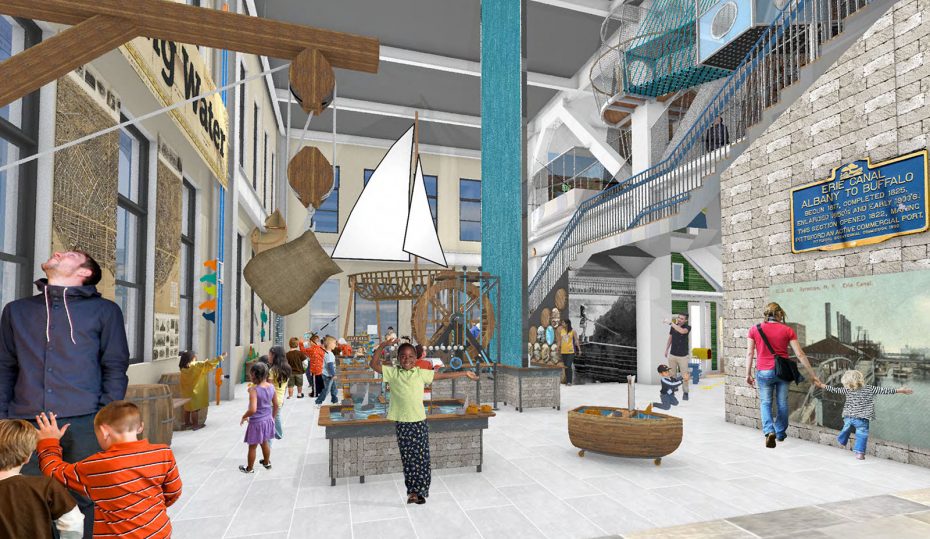 "Playing Together" will be all about sports and movement, with a racing activity, "Rigging & Rambling" climbing area and a socks skating rink with a Jumbotron in a mini-Memorial Auditorium.

A locker room will allow kids to dress up in the uniforms of local sports teams and be photographed onto baseball or football cards.

Fishing will also be represented with a boat, life jackets and fishing rod.

"Lighting Buffalo's Imagination," inspired by the 1901 Pan-American Exposition's thousands of bright lights — will allow kids to make electricity using bikes and hand cranks. An innovation wall will celebrate an initial 40 inventors and innovators from the region, with a panel allowing some of the products to be touched and demonstrated.

Children will get a chance to use real tools in the educator-facilitated "Tinkering Tank," as they try their hand at making things and taking things apart. Building a roller coaster with tracks, chutes and tubes will be one of the challenges. 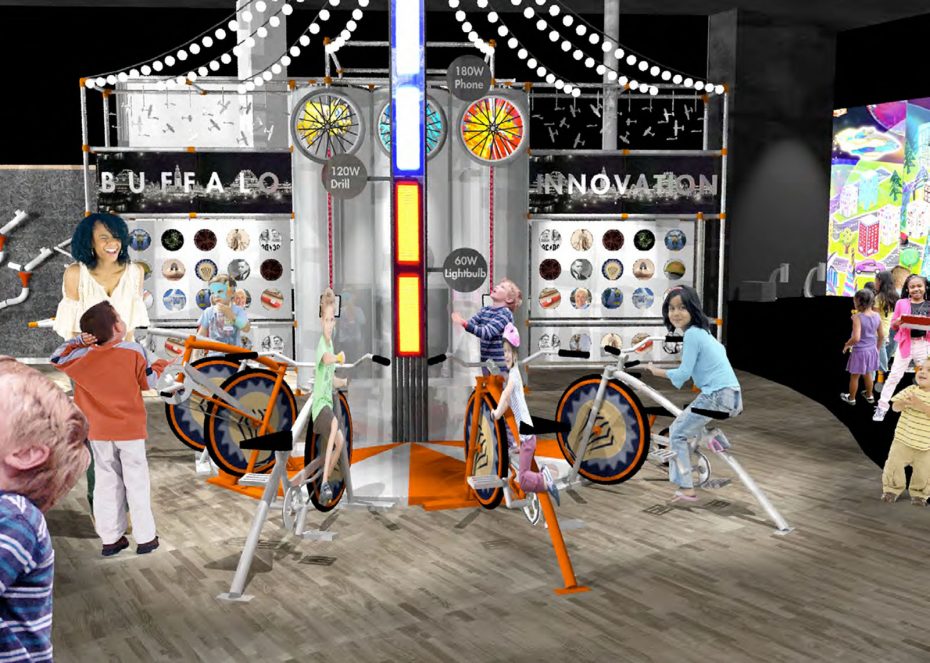 The museum will also feature a room dedicated to Buffalo's history of innovation.

Kids will be able to erect tall buildings with blocks and other materials while learning something about architecture in "Building Buffalo."

Putting a bridge together and using pretend tools to build a house will also be part of the exhibit's activities.

A pretend hospital and research lab will highlight the "Working on Wellness" zone. Kids will get to role play — from a doctor or nurse to x-ray technician and researcher – as they gain some familiarity with what goes on in hospitals and medical buildings.

"We talk about the importance of having a career, and this is a way of introducing a career early on," Urbanczyk said.

The exhibits are also intended to introduce new words and concepts that children may be more receptive to through the lens of play, she said.

Agriculture gets most of the attention on the fourth floor.

The immersive "Farm to Fork" offers exposure for locally-grown foods, and things you'd expect to see on a farm, such as a milking cow, barn and chicken coop. Kids will learn how to plant, grow, harvest, load a small-scale truck to take produce to market and to shop for food. There will also be a pretend kitchen to prepare food.

"This is about teaching kids how food comes to your table," Urbanczyk said. "It deals with sustainability, and why we should be good stewards of our land."

The fourth floor will also have a demonstration kitchen and arts studio. A  green-designed rooftop garden will offer a variety of programming.

The exhibits have been engineered to be accessible to children with sensory, mobility, learning and other disabilities.

The exhibits were designed by Gyroscope of Oakland, Calif. They are being fabricated by Art Guild of West Deptford, N.J., with graphics by Johnson Hehr Associates of Buffalo.

Toward the finish line

The museum is currently in a crowdfunding campaign to raise $2 million dollars so that — thanks to a matching grant from the Ralph C. Wilson Jr. Foundation — it  can reach its $29 million fundraising goal. For more information, go to playitforward.exploreandmore.org.

An additional $6 million is also being pursued to create an endowment for the museum.

The fundraising effort will continue as exhibits start to move into the building in several weeks, and as anticipation for the museum's opening builds toward the spring opening.

"I think people can't wait to see it after hearing about the museum for so long," Urbanczyk said.