Listen to Dr. Igor Puzanov and you hear the excitement that comes with helping to bring new, improved cancer drugs to patients.

Not that, as a layperson, you can easily follow what he is saying...

"In 2010, 2011, when Dr. Suzanne Topalian [of Johns Hopkins] had the first presentation of this drug which you now know as Opdivo, I was trying to get the M.D. Anderson Phase 1 guys to come and they were like, 'No, you want to go to the PI-3 kinases symposium.’ I said, 'Screw that, this is a breakthrough,’” Puzanov said at a fast clip in his Czech accent during a recent interview at Roswell Park Comprehensive Cancer Center.

Forgive the Prague native if he can't slow down. Promising new cancer therapies have been all around him during the last dozen years, first in his work at Vanderbilt University in Nashville and since 2016 in his role as director of the Early Phase Clinical Trials Program and chief of melanoma at the Buffalo cancer hospital.

Puzanov has worked with teams that have helped prove the effectiveness of cancer drugs that include:

“These were my three biggest projects, but I was involved in others over the years, too, including combination drug therapies," said Puzanov, who is also a professor of oncology at the University at Buffalo Jacobs School of Medicine and Biomedical Sciences.

Two of the latest clinical trials that energize him involve combination therapies, pairing a potential new drug called tilsotolimod with either Keytruda or another new immunotherapy called Yervoy.

Roswell Park is among a prestigious group of cancer research hospitals from around the world that is part of a Phase 3 trial, the last, and most promising, stage of clinical research. The federal Food and Drug Administration (FDA) will consider approval after completion of the trial, which is expected to involve hundreds of patients during the next 2½ years.

Those with Stage 4 melanoma – the most serious kind, because cancer has spread beyond the skin to other parts of the body – are eligible to participate by talking with their oncologist or calling Roswell at 1-800-767-9355. Puzanov also encourages anyone with cancer to contact the hospital about prospects for participating in other clinical trials.

Q: How does melanoma generally form and spread?

It arises from the pigmented cells in the skin or other parts in the body. They are cells that contain the melanin, the pigment. It has an origin with nerve cells. They react to the UV light. They are also in the mucosal surfaces. They can be found in the small bowel, large bowel, mouth, sinuses. They can be also found in places where people don't expect them. There is ocular melanoma arising from the cells in the eye.

Q: How has melanoma traditionally been treated? 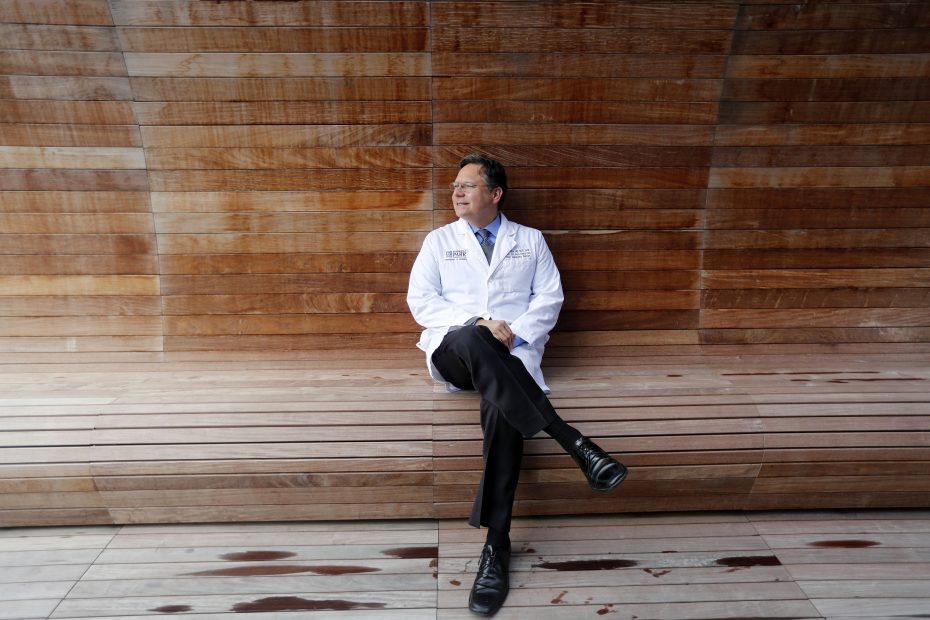 "You never know until you finish all these trials but if it works, it will be a nice story about the ability to help create something new and drive it to success," Dr. Igor Puzanov says about a current trial involving the drug tilsotolimod. (Mark Mulville/Buffalo News)

With surgery if you catch it early. That's why we recommend preventative care and having suspicious lesions checked by a dermatologist [and removed and tested, if needed]. Where surgery is not effective, or patients come too late, and it's already visibly spread, you have to treat the whole body with systemic therapy. In the past, it was with immunotherapy such as Interferon … or standard chemotherapy. The chemo was never a cure, and not very effective. Five percent, 10 percent of patients might be long-term survivors when treated with high doses of Interferon.

With this onslaught of both targeted and immune therapies, in patients with metastatic melanoma, the median survival basically moved from eight to 10 months to more than three years. … Because these drugs are so new, we have to wait two more years to see if that survival will stay the same or improve.

Melanoma is almost like a testing ground for all different patients with all different cancers. In melanoma, you see it first because these patients are getting these drugs the longest, so you see what kind of problems that may emerge, including side-effects, management, toxicity.

Q: How do these new drugs work?

A: Checkpoint inhibitors work to increase susceptibility of cancer cells to the body’s own immune fighting cells. In some – but not all – patients, these immunotherapies are not as effective in treating the cancer. Cancer is smart. [In advanced stages,] it’s sending negative signals to the patient’s immune system. The patient’s immune system is trying to come in, but it gets shut down by the negative signals. ... The cells that potentially can be activated with checkpoint inhibitors such as Yervoy or Opdivo or Keytruda, or a combination ... [don’t get the message].

The cells are in the tumor. They try to kill it. They don't have the strength.

Q: The clinical trials are looking at how a drug called tilsotolimod works in combination with some of these checkpoint inhibitors?

It’s been suggested that checkpoint inhibitor therapy does not work for all patients because the tumor itself in some patients has turned “cold,” and cannot be detected by the immune system.

We asked the question, “What if we combine tilsotolimod with either Keytruda or another backbone, Yervoy?” We found out it was a much better partner for the Yervoy when you want to trigger the immune system to bring more immune cells into the tumor…

The tilsotolimod drags in its partner and the other drug gets it activated. You inject it into the tumor. It's like tagging the tumor for destruction. It's really good because not only do you tag that tumor for destruction but once you destroy one tumor, the immune system will kind of pick up the debris, the pieces, and say, “This is foreign,” and it starts looking around the rest of the body to see if there are any more of these pieces. The system finds the other tumors and kills them also.

You never know until you finish all these trials but if it works, it will be a nice story about the ability to help create something new and drive it to success.

The initial data shows it's doing its job. It's playing well with its partner. It doesn't have many side effects and we can inject it shallow, we can inject it deep and think about the next step, other combinations – maybe even using it in earlier forms of cancer, maybe instead of Stage 4, Stage 1 or 2. If it works, it will be a breakthrough. It will not be a cure-all but something people can do after they've progressed on Keytruda or Opdivo and will be developed with a big involvement from us.