Delaware North, one of the largest companies based in Buffalo, wants to get even bigger.

The privately held hospitality and food service giant pulls in about $3.5 billion in annual revenue from its global operations. The company wants to boost that figure to $5 billion per year within four years.

Family-owned Delaware North brought in consultants to study its business and to help the sprawling company scale up while running more efficiently.

The company is opening new hotels and restaurants, offering new experiences, scooping up assets and finishing a massive development in Boston.

Delaware North also has hired additional workers, at the headquarters it opened in downtown Buffalo three years ago and at its Amherst call center.

It’s a growth plan spurred by a recent low point for Delaware North – the loss of its concessions contract at Yosemite National Park – and it represents a new approach for the century-old company.

“We’ve doubled every decade. So all we’ve said is we want to accelerate that a little more,” Jerry Jacobs Jr. said in an interview last week at the company’s headquarters with his brothers and fellow CEOs, Lou and Charlie.

Delaware North was founded by three Jacobs brothers in 1915. Jeremy M. Jacobs, son of one of the founders, has run the company for 50 years and remains chairman.

In 2015, Jacobs named his three sons co-CEOs, with Jerry Jr. and Lou based in Buffalo and Charlie overseeing the company’s Boston holdings. Also that year, Delaware North moved into a new corporate headquarters at 250 Delaware Ave.

That expansion push came a short time after Delaware North lost about $130 million in annual revenue when the National Park Service awarded the concessions contract at Yosemite to Aramark.

The company remains in a legal fight over the value of trademarked property, including names of popular Yosemite attractions, that Delaware North insists Aramark was required to purchase.

Jerry Jacobs Jr. said the lost contract was a blow to the company and its leadership, as well as a source of motivation.

“We are sticking it to Aramark at every turn. We are pursuing business with a vigor that we didn’t have before,” Jerry Jacobs Jr. said. “I think it was that single loss that woke us up.”

But the fundamental reason Delaware North seeks to grow is it wants to create a more stable company with more diversity in its business lines. And that, the brothers said, will attract better talent and allow current employees to grow more in their jobs.

The company brought in McKinsey & Co. and other firms to study its operations and recommend changes to how it operates. The consultants looked at everything from interpersonal relationships among executives to the corporate structure.

“We’ve always been the company that prided itself on solving problems internally,” Jerry Jacobs Jr. said. “We’re starting to behave like a big company.”

The company, for example, is shifting from a structure of siloed subsidiaries, reporting to one president, to a model based on teamwork that runs through a newly empowered group of executive vice presidents. “Everybody plays as one,” Jerry Jacobs Jr. said.

To draw in more customers, Delaware North is opening new hotels, casinos and other venues around the world.

At the Walt Disney World Resort, for example, the company has opened three restaurants at the Disney Springs complex, with a fourth on the way in Epcot. The restaurant, which will provide patrons the feeling of going into outer space for their dining experience, will open next to two spaced-themed rides at the resort.

And in West Yellowstone, just outside Yellowstone National Park, where Delaware North has three hotels, the company added what it calls Explorer cabins.

Lou Jacobs called it “pretend camping,” and said the rustic units are renting faster than traditional hotel rooms. “They’ve just been a home run,” he said.

In Boston, Delaware North and Boston Properties are finishing a $1.2 billion project next to TD Garden that includes 1.5 million square feet of retail, office, residential and hotel space built on top of a transit hub. “What’s happening now, it really is transformative for the neighborhood,” Charlie Jacobs said. 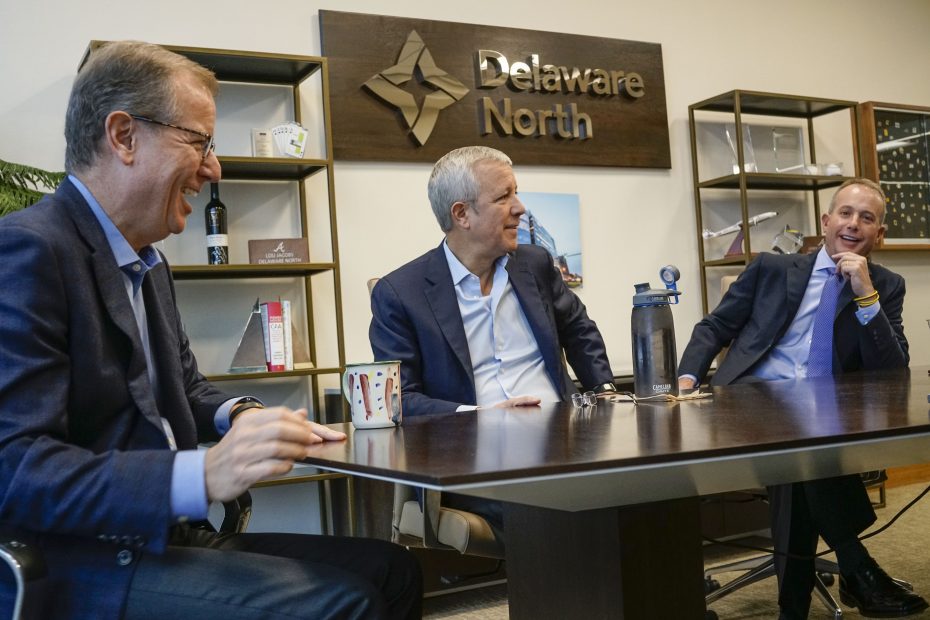 The company bought a share of a rugby stadium and event venue in England, for example. Delaware North is trying to bolster its presence in the United Kingdom, in the hopes it can use that as a launching pad to reach into Europe.

The company in recent years also has acquired a maker of casino-type mobile games. And the company bought a second casino in West Virginia, and hopes to be open for sports betting by November in that state, Lou Jacobs said.

What does this expansion mean for employment at Delaware North?

When the company moved into its new headquarters three years ago, it had 350 workers there. Today it has 430 workers and expects to get close to 500 next year.

That doesn’t count the 110 full- and part-time workers at an Amherst office park, where it moved in 2015. Those employees work in a call center, a service center and in marketing.

However, the company also is outsourcing work and eliminating some positions as it reshapes the company.

Delaware North is shifting its data processing and accounts payable work to a company in India and Sri Lanka, Jerry Jacobs Jr. said.

All told, the company is eliminating 27 jobs due to this outsourcing. Thirteen of the workers applied for and received new positions within Delaware North. Four opted not to apply and 10 applied for, but did not receive, a different position.

The company can’t continue to perform those tasks the way it always has, Lou Jacobs said. “If we want to be successful, we have to continually re-evaluate the cost structure,” he said.

Also, the company already is strapped for space in its new building. 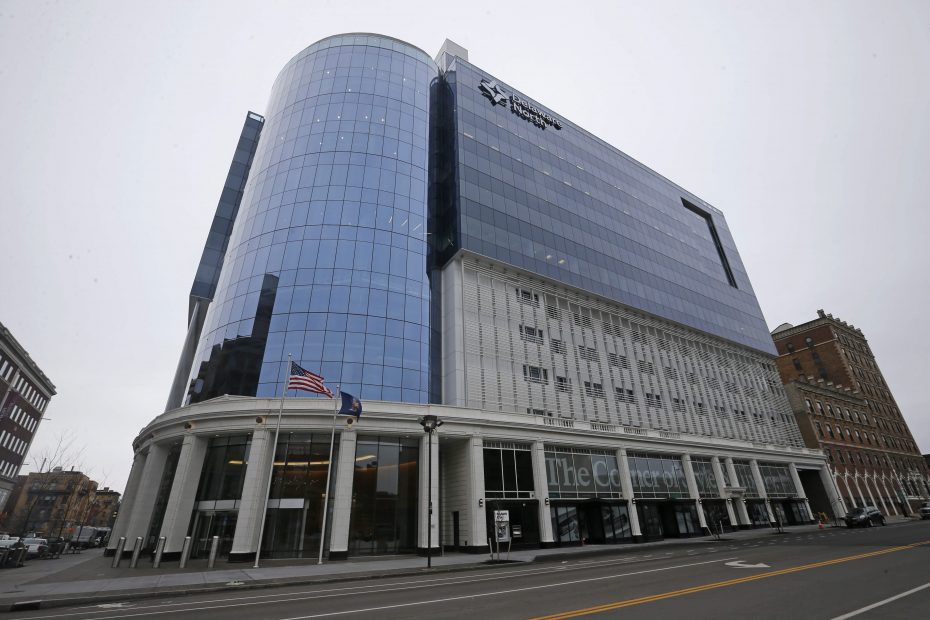 The century-old company faces a number of challenges as it prepares to grow.

For one, with unemployment rates shrinking across the country, it gets harder to fill seasonal and part-time positions at sports stadiums, parks and other venues, Lou Jacobs said.

While attendance at NFL and NHL games has remained strong, Major League Baseball was on track this season to have its lowest attendance in 15 years.

Charlie Jacobs said fans remain engaged with their favorite teams, but in nontraditional ways. His children, for example, are much more likely to watch a game on their smartphones than on TV.

“People are going down, want to be part of the event, but not actually watch the event,” said Lou Jacobs, who noticed this phenomenon at the Australian Open tennis tournament. “They just want to feel the energy that comes off of it.”

The company must adapt to this new reality, he said.

At TD Garden, Delaware North is planning what Charlie Jacobs described as a “millennial deck,” a club meant to appeal to younger fans at a lower price point than a suite or premium seat.

Delaware North is eager to add betting on sports as an option at its casinos and racinos, but so far the company hasn’t seen the benefits as a handful of states have legalized that activity.

“We do strongly believe that the eventgoer that sits in those seats, or on our millennial deck, or whatever it may be, will be more engaged because they have quote-unquote ‘skin in the game’ in terms of a wager of some kind,” Charlie Jacobs said.

The three brothers say they haven’t yet brought any of their children into leadership positions at the company.

It’s a future the century-old company is preparing to confront.

“The greatest fear that we have, that this company and this family has, is complacency,” Jerry Jacobs Jr. said. “Because we think if you’re not moving forward, you’re moving backward.”