A 1975 Oldsmobile Vista Cruiser can be found down under the bucolic hills of Lewiston overlooking the Niagara Gorge.

Encased in plastic and covered with tar, the “Citizen’s Time Capsule” contains 30 vintage suitcases stuffed with treasures to communicate the culture and values of the 1970s to people in the 21st century.

Documented contents include a Buffalo Bills pennant, a Playboy issue, cigarettes, liquor and a 4-by-6-inch photo of Mao Tse-tung.

But the location of the subterranean time capsule is a bit of a mystery, said Tanis Winslow, Artpark director of visual arts and family programs.

“We needed to identify where it was. We knew it was on this hill somewhere,” she said, standing on the steps of the amphitheater hill near the entrance on Fourth Street in Lewiston. “It’s important historically to find and identify the location — just for posterity and historic and archival reasons.”

That is why two SUNY Buffalo State professors using ground-penetrating radar combed the hillside Friday morning — like beachcombers searching for silver.“Our goal today is to identify its location. This is a non-intrusive technique,” said Lisa Marie Anselmi, an associate professor of anthropology.

An archaeologist by training, Anselmi also uses the GPR to find unmarked remains buried in cemeteries.

“We’ve done some investigative work in historic cemeteries in Western New York trying to locate burials that have been disassociated from their markers,” Anselmi said.

Nearby, Kevin Williams, associate professor of earth sciences, guided the GPR and detected an underground “disturbance” that could indicate a buried object. The researchers can’t be certain until the data is analyzed back at the lab.

Williams admitted he’s never looked for a car before. But as the director of the college Planetarium, he is familiar with cosmic undertakings.

“The idea that it was buried here, and that we could hopefully find it, was very interesting to me,” said the scientist. “The car is buried somewhere in this area. They want to be able to locate the boundaries, so 20 years from now they won’t have to do this again.”

Ant Farm was an avant-garde media art and architecture collective founded in San Francisco in 1968, said Michael Beam, an Ant Farm devotee and curator of collections and exhibitions at Castellani Art Museum of Niagara University. 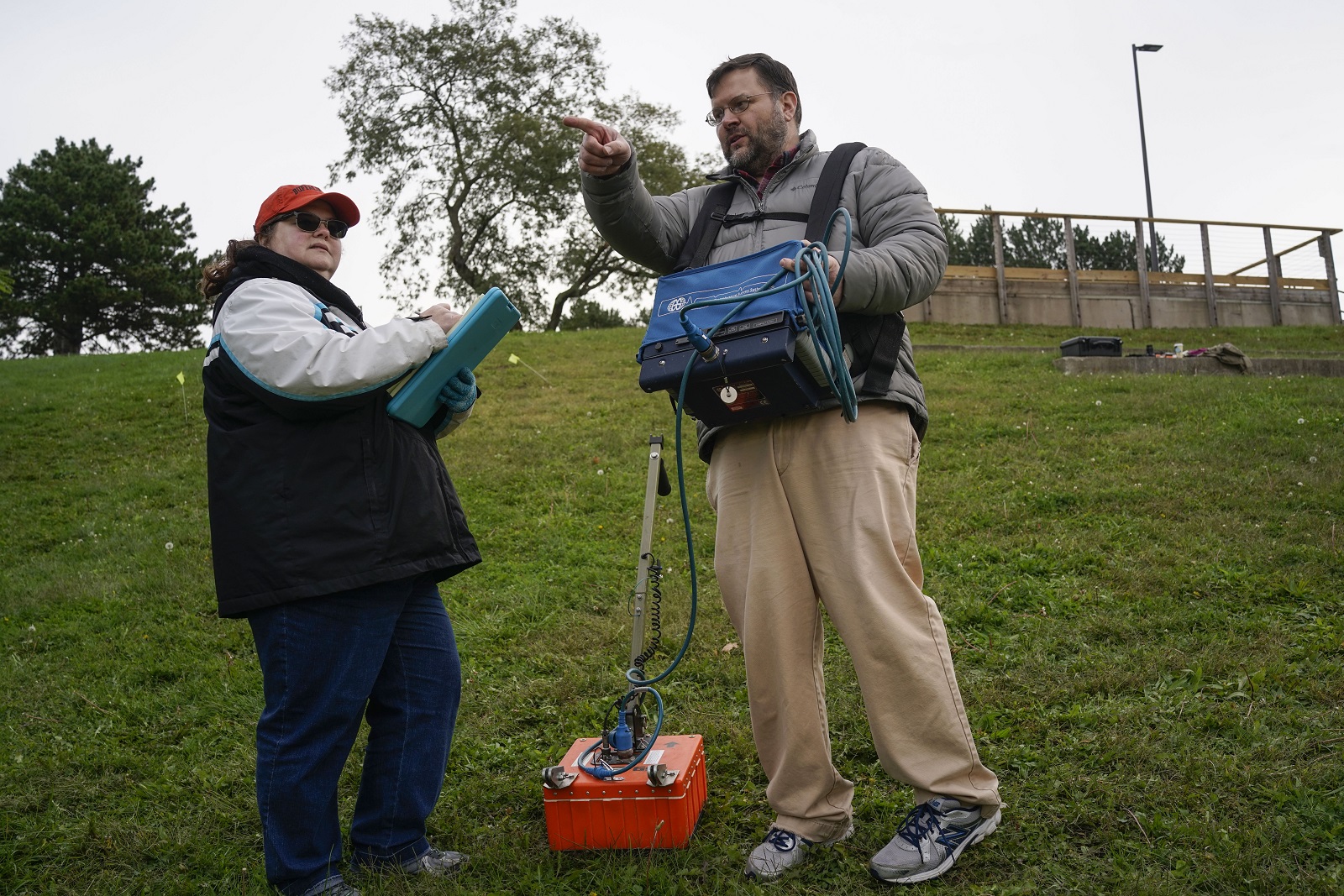 “The best we can do today with our technology is capture a digital image of it — non-invasive research,” said Beam. “I’m volunteering because this is exciting. It’s historical, and I just want to be a part of it.”

Beam was gleeful on the hill as he guided the effort to find the buried treasure. Beam sparked the effort to locate the time capsule, one of four created by Ant Farm in the United States. The Artpark installation was buried on Sept. 7, 1975. It figured in Artpark’s 40th year celebration in 2013, said Winslow.

The anniversary was marked with a retrospective gallery and installation that showcased 16 artists from 1974 to 1984, Artpark’s first 10 years, considered by many to be the institution’s peak. Ant Farm’s co-founder Chip Lord was one of the artists.

“Originally there was a plaque designed to be placed on the ground to identify the time capsule’s location,” said Winslow. “We knew it was in the plans, but I’ve never seen the plaque. I’ve only seen a drawing of it.

“The importance of knowing where it is important for art history and educating future generations of the art-making that happened here.”

By day’s end, the researchers had located the general vicinity of the installation, to be confirmed back in the lab.