Twenty-nine football fields worth of downtown Buffalo’s best real estate has long been abandoned to parked cars, with more value as parking lots than as project sites for apartments or offices.

But as interest in city living surges, that calculus may be starting to change.

At least 11 new buildings sprung up on downtown parking lots in the past 10 years, according to Buffalo Place and the city’s Office of Strategic Planning.

The projects, which range from 39-unit buildings to the $250 million HarborCenter, represent one of downtown’s best hopes for revival, say business leaders and city planners. Experts say Buffalo cannot rebuild its downtown with 39 acres of surface lots scattershot through its center.

But even as new buildings rise, progress remains fragile. Surface parking is a profitable business in a city still beholden to suburban commuters.

And it’s not yet clear if demand for a downtown address will spark a longer, transformative building boom – though developers contend it may one day be possible.

“The reality is that we’re not growing jobs or population enough yet,” said Mark Croce, the president of Buffalo Development Corp. and the owner of nearly two dozen downtown lots. “When that starts to happen, then you’re going to see infill development rebuild Buffalo.”

Early stirrings are already visible. Lou Montesano watches them with hesitant optimism through his dusty window. The 77-year-old owns a shop, Lincoln Coin and Stamp Co., that sits across from a parking-lot-turned-hotel at the corner of Pearl and Tupper streets.

“I want to see downtown come back,” Montesano said.

“But can they fill the new buildings?” he asked. “If they can fill 'em, that’s fine. But if they can’t, that’s a problem.”

Montesano tells a story of downtown Buffalo that many locals know well. When he opened Lincoln Coin and Stamp in 1963, the neighborhood boasted a thicket of stores, restaurants and theaters. But as the suburbs developed and city residents fled, both the city and private landlords bulldozed vacant buildings to make way for parking lots, then considered a must-have attraction for suburban shoppers.

On Montesano’s block, his favorite greasy spoon became a driveway into a lot. That lot grew larger with each decade, swallowing a doctor’s office, an engineering firm and, in the 1970s, a casket maker.

Now 500 Pearl – a 12-story, glass-and-gray-brick complex – looms where much of that mega-lot lay. Rising rents in the downtown corridor made it profitable to build again, said William Paladino, the chief executive officer at Ellicott Development, which developed 500 Pearl and also owns several hundred downtown parking spaces.

Of particular interest is the area around the Buffalo Niagara Medical Campus, which concentrated thousands of jobs in the downtown corridor and generated new demand for high-end offices and apartments. Commercial property values in that area and the neighborhoods around it have more than tripled in the past 15 years, according to the real estate tracking firm Attom Data Solutions.

“Today, there’s no surface parking lot I wouldn’t readily build on if I had other parking for tenants,” Paladino said.

The upswing extends outside of the Medical Campus, as well. Since 2008, developers constructed at least 11 new buildings on downtown parking lots and proposed two more, city records show. They have also built or proposed seven additional buildings on vacant lots, which historically also saw little construction.

HarborCenter sits on a former parking lot. So do large portions of the Medical Campus, the Robert Jackson Courthouse and part of the global headquarters of Delaware North.

At 1091 Main St., bulldozers and cement trucks swarm a 2-acre lot that once offered parking to well over 100 cars. That site, also owned by Ellicott Development, is slated to become offices.

“Some of the developers are saying, ‘Hey – we've done great downtown, but now ... it's getting time to look at parking lots,’ ” said Debra Chernoff, the manager of planning at Buffalo Place, a nonprofit economic development group. “Hopefully we'll keep evolving in that direction.”

Filling 'holes' in the urban fabric

Downtown certainly doesn’t lack parking lots to bring to life again. City planners estimate public surface lots account for roughly 13 percent of downtown's total land. That is “shocking” in comparison to most American cities, said Eric Scharnhorst, the principal data scientist at the analytics firm Parkingmill. But it is not unique among Buffalo’s peer cities, such as Pittsburgh and Cleveland.

In each of these cities, urban planners and local governments have long urged construction on parking lots – the better to build population density and attract stores, businesses and restaurants.

Surface lots in Buffalo, in particular, have created “large voids within downtown,” the city’s 2015 infrastructure plan concluded. While development has grown around those voids – on Chippewa, in the Theatre District and near the Medical Campus, for instance – business groups say those isolated pockets can’t fuel 24-hour street life or support even a midsize grocery outlet.

“This is not just about putting buildings on these empty lots,” said Dottie Gallagher, the president of the Buffalo Niagara Partnership, which represents local businesses. “It's about creating public spaces that are inviting and that feel like a neighborhood.”

For starters, Gallagher said, she would like to see the city encourage infill in certain high-growth areas, such as the blocks around Canalside and City Hall. Her organization has lobbied the Erie County Industrial Development Agency to expand its adaptive reuse program to support new construction on parking lots. 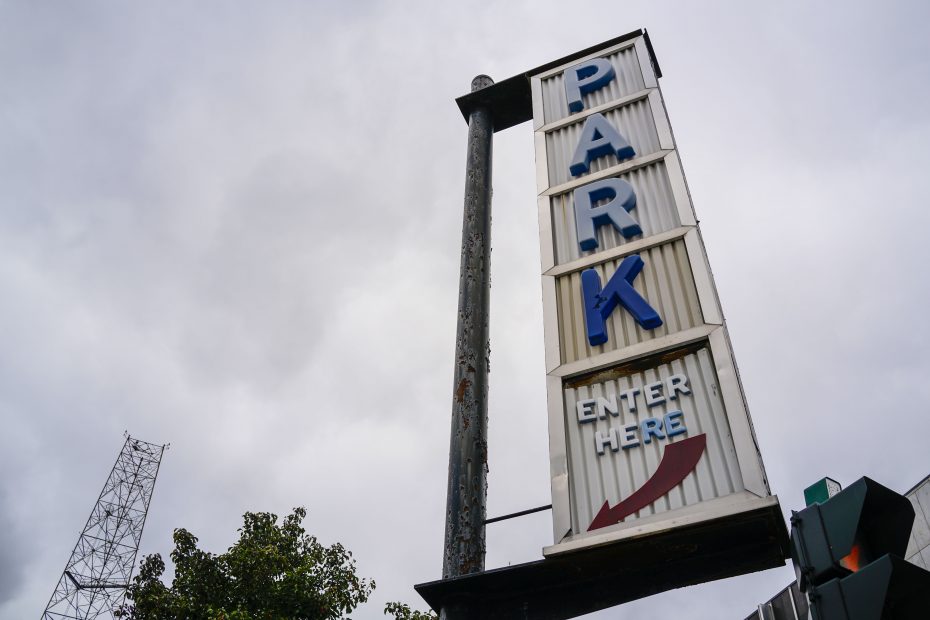 A sign pointing to where there used to be an entrance to a parking lot at the corner of Oak and Clinton streets. (Derek Gee/Buffalo News)

The city has also moved to encourage construction on the nearly 9 acres of surface lots it owns, selling two of its largest parcels to local developers. The first of those is now the site of HarborCenter. The second, a 2.5-acre lot beside the Buffalo and Erie County Library, is the prospective site of an 18-story high-rise and grocery store, which remains in the planning stages.

"It's definitely progress, but there's still a lot of opportunity," said Brendan Mehaffy, the executive director of the Office of Strategic Planning. "We are working to ... accelerate this type of conversion in the city so we can achieve our stated long-term goals of a vibrant, 24-7 downtown and strong neighborhoods."

Other prime parking lots include the M&T Bank lots between Genesee and Washington streets, which consultants have pegged as potential sites for a grocery store or park. The city-owned lot at Court and Franklin streets could also prove attractive to small retailers, said local preservationist and urban designer Tim Tielman, as could the 222-space Allpro Parking lot at the corner of Broadway and Washington Street.

Until it was demolished in 1972, the historic Lafayette Theater stood on the site of the Allpro lot, along with a restaurant and a string of small shops.

“That's the ecosystem [Buffalo] used to have, and that we have to restore,” Tielman said. “There’s no beehive of activity downtown because we destroyed all these buildings where the parking lots now are.”

But even as momentum for “infill” building grows, its future remains uncertain. Downtown commuters still need to park. And the city can only sustain so much construction.

Commercial realtors expect a flood of high-end apartments and office spaces to hit the market as developers complete large, ongoing projects, such as the renovation of One Seneca Tower. That will likely slacken demand for new construction, unless far more employers and residents begin moving downtown.

Some developers say they’re also contending with the demands of downtown tenants, who often require parking. While the neighborhood has 34,323 off-street spaces, according to Buffalo Place, utilization surveys show there’s little room in the core lots and ramps.

“Whenever you take out a parking lot, you have to put parking back,” Paladino, of Ellicott Development, said.

Even given those hurdles, however, Paladino said he plans to continue building over select downtown parking lots. Each of his two ongoing projects downtown includes its own parking garage. Where 117 cars could once park at Tupper and Franklin streets, there’s now room for 380 cars – plus retail space, offices, hotel rooms and high-end apartments.

The project hasn’t been without its critics. Among other issues, the footprint of 500 Pearl engulfed a surface lot and an apartment building – and that building, constructed in 1886, was demolished to make room for parking.

But that didn’t much bother Montesano, who said any new construction is a welcome contrast from the “tearing down” he witnessed in the 1970s.

“You go outside now,” he added, “and it looks like it’s making its way up again.” 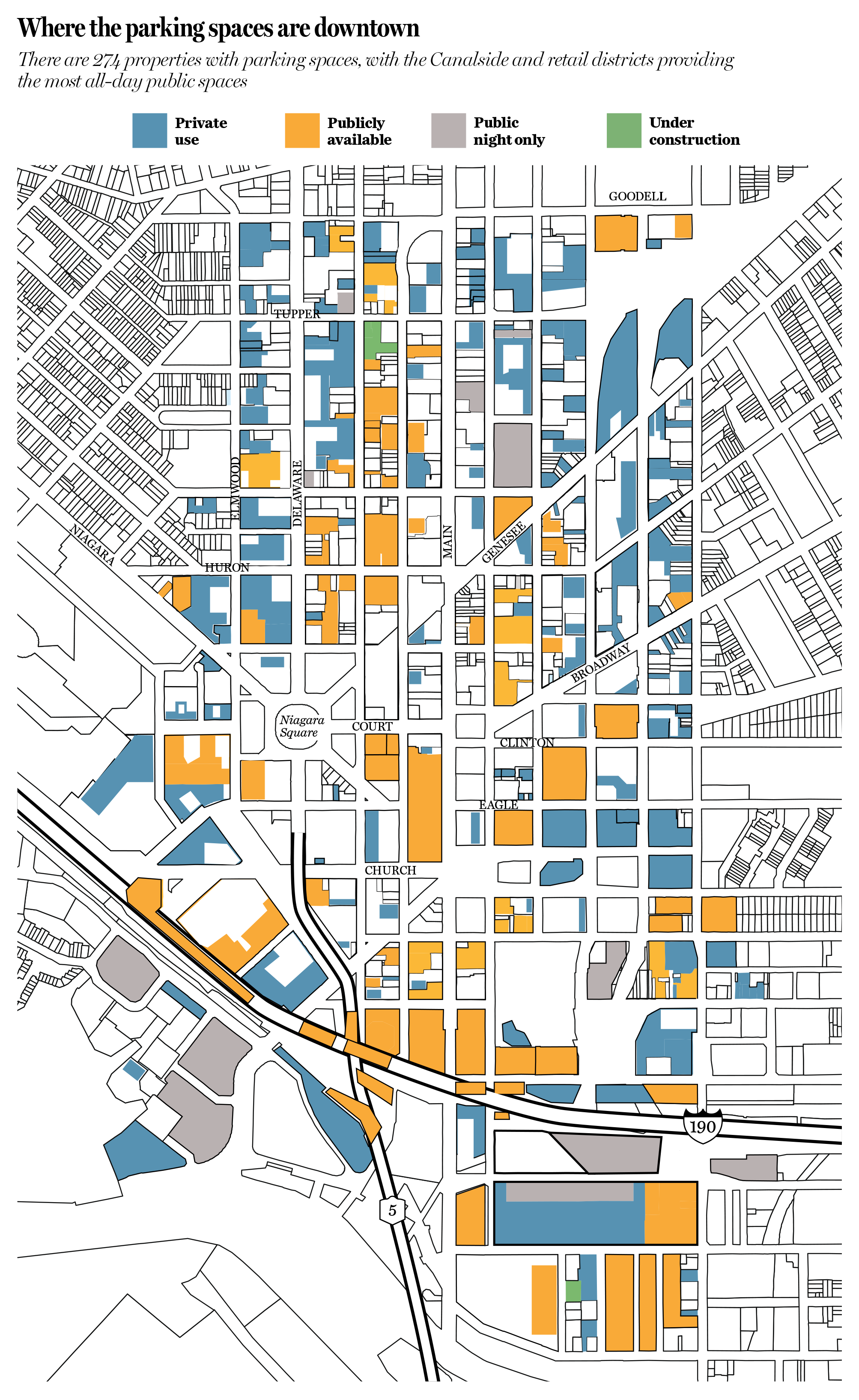 (Illustration by Chris Fisher/Buffalo News based on data from BuffaloPlace)