Before The Legacy reopened in the heart of town, Springville’s restaurants covered the basics: tavern menus of burgers and salads, breakfast-to-dinner family spots, pizzerias, a Mexican place, and both flavors of American Chinese food (takeout and buffet).

What it hasn’t had since Ted and Kathy Winkey closed their restaurant in 2006 is a place that could swing fancy. When the Winkeys brought The Legacy back in January, they put specials like tuna tartare and beef wellington back on the Springville menu.

Going on a year into its revival, the restaurant has settled into its role as a crossroads watering hole that can also pull off a night-on-the-town air. The Legacy has you covered with the basics – wings, beef on weck, and the sort of gringo tacos that contain ground beef, shredded lettuce and shredded cheese.

It can also offer something finer, giving Springville a spot with an upper register. 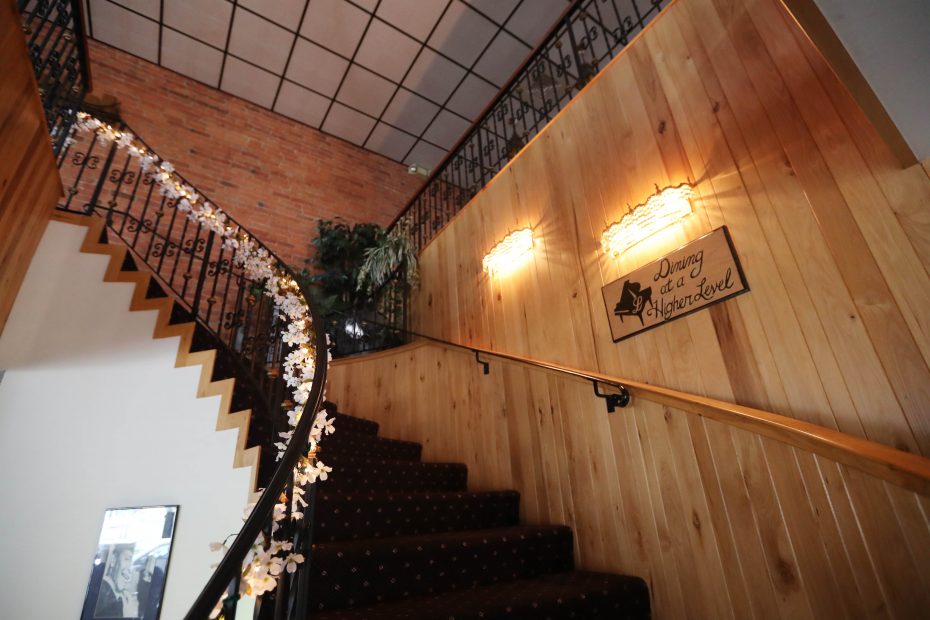 The Legacy in Springville has a curving staircase leading to second-floor dining room. (Sharon Cantillon/Buffalo News)

The first floor is a tavern with televisions and a bar on one side. Sweep up the curving staircase to the second floor, open on weekends, and there’s a grand piano and framed images of the Rat Pack. The Legacy does live music, too, on many weekends.

The Legacy’s day starts with lunch, where an extensive sandwich menu comes into play. Seared salmon filet on toasted brioche ($12.95) with Cajun remoulade and arugula beckons to the pescatorially-minded from a battery of meaty choices.

The Winkeys have chosen to remember local figures by naming sandwiches after them. The Zielinski Brothers Triple Play ($12.95) is named after local brothers who loved baseball so much they built their own ball field and organized a baseball league. That does add a certain local flavor to what would otherwise be known as a club sandwich, for its layers of turkey, roast beef and bacon layered between three pieces of toast, with lettuce, tomato, mayonnaise and cheddar.

Another namesake sandwich was my favorite plate of the night. The Garlock's Deluxe Schiacciata ($13.95, image at top of post) is named after David Garlock, a Springville businessman who died in 2017. The Winkeys honored their friend with a Matterhorn of a sandwich, cut in wedges and stacked so it towers above the plate. Inside crusty focaccia-style bread is capicola, mortadella, salami, sliced fresh mozzarella, basil pesto mayonnaise, lettuce, tomato and roasted red peppers. It’s a handful, but it's worth grappling with for the abbondanza of Italian flavors. 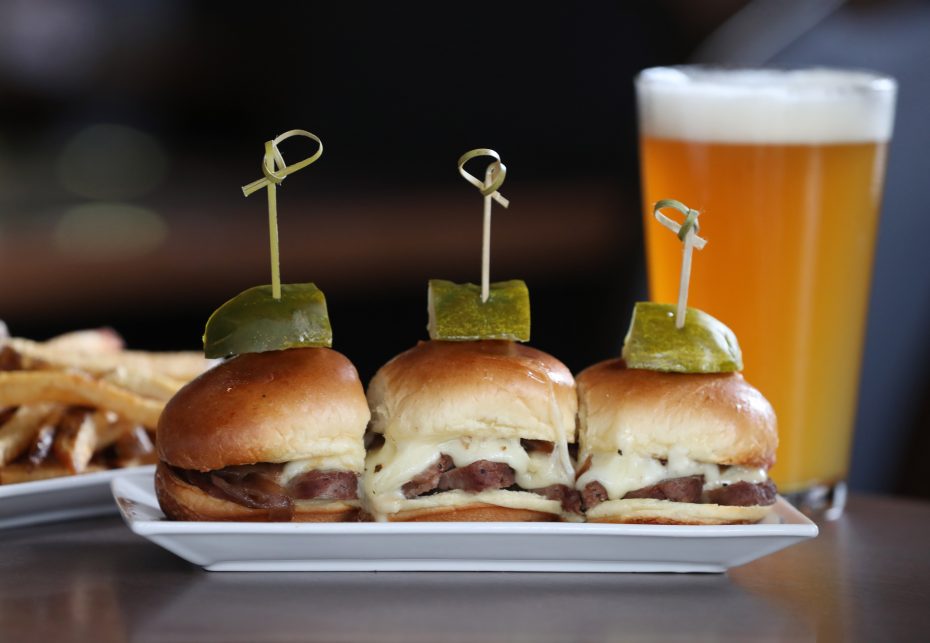 Another sandwich that was particularly effective was the short rib sliders ($11.95). A trio of sweet, eggy brioche buns was griddled with butter, then filled with helpings of silky-rich pot-roast-tender beef, adorned with melted provolone cheese and a spread of caramelized onions and roasted garlic. One bite and I thought, this is what an Arby’s beef and cheddar sandwich wants to be when it grows up.

Beef on weck ($10.95) offered a fresh, rock-salt-speckled  roll and beef that was moist enough despite being thoroughly gray.

Sandwiches offer a choice of chips or french fries. I would recommend the latter, crispy tipped with bits of potato skin.

The Legacy’s appetizers include standards presented in decidedly non-standard formats. Stuffed peppers ($10.95) appeared as three cheese-covered domes spaced out in a pink pool of room-temperature basil-tomato cream sauce, dotted with grape-sized spheres of fresh mozzarella and dabs of ricotta. The plate was then showered with grated cheese, giving the finished dish a pepper-to-cheese ratio tragically short of pepper. 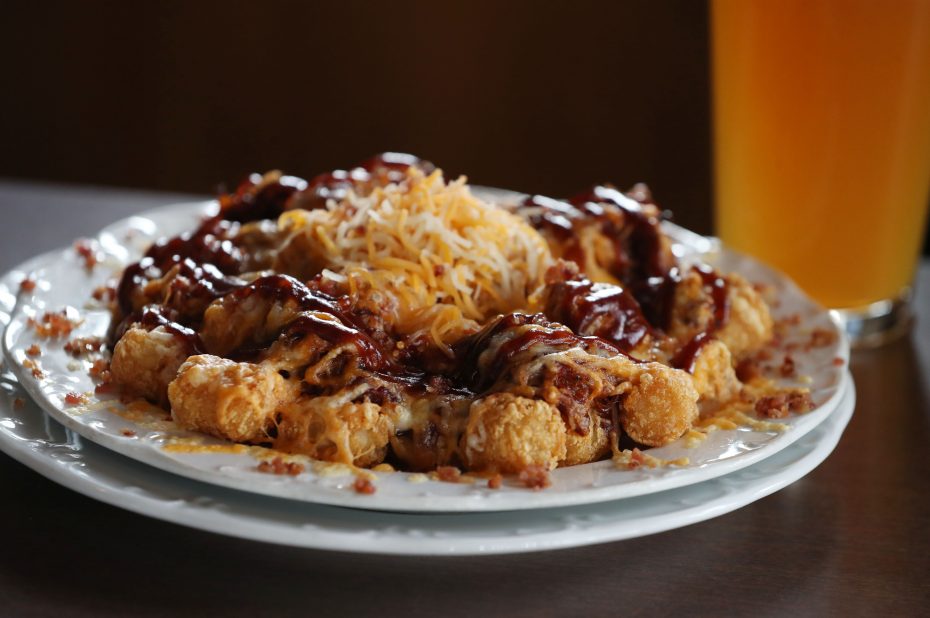 Better was the meatball Parmesan ($10.95), two peach-sized beef spheres whose tomato-sauced hunkiness made them right at home carved into wedges and gobbled up on proffered pieces of grilled toast. Stuffed mushrooms ($10.95) were two saucer-sized portabella caps heaped with spinach-and-cheese stuffing, covered with mozzarella and broiled. Served on a small salad’s worth of greens under a blizzard of shaved and grated cheese, it could have made a satisfying vegetarian meal with a bit of bread.

The appetizer that brought the most attention was Tater My Tots ($10.95), a plateful of sheer pandering. Deep-fried shredded potato bites were topped with pulled pork, shredded four-cheese blend, and shards of crispy bacon, then drizzled sparingly with barbecue sauce. The resulting combination of flavors and textures was inviting, using the simplest language: crispy potatoes, tender pork, plus the salty-smoky-tangy-sweet accents of sauce and bacon. It probably would have been even better if the plate was run under the salamander to melt the cheese. 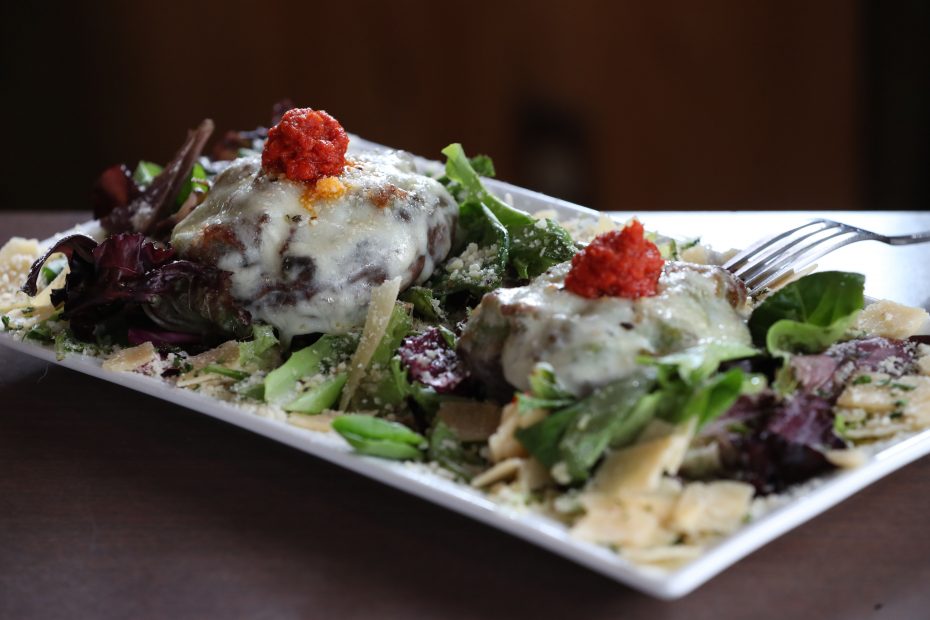 Salad choices include a chicken souvlaki ($10.95) that was one of the odder constructions I’ve seen. A mound of field mix with cherry tomatoes and pepperoncini filled the plate. Triangles of flatbread lay atop the pile of greens. Crumbled feta cheese and chunks of chicken breast devoid of grilled character were arranged around the rim of the plate. I carefully scooped cheese onto the bare greens and applied creamy herbed dressing, but it wanted more of a Greek accent.

Ordering the salmon entrée ($21.95) brought a warm half-loaf of bread and stiff piped butter in a dish. Ordered with more of those solid fries, the fish was faintly seared, and moist enough. The accompanying vegetable medley was soft as butter. I like my veg to offer some resistance, but I’m cranky that way. 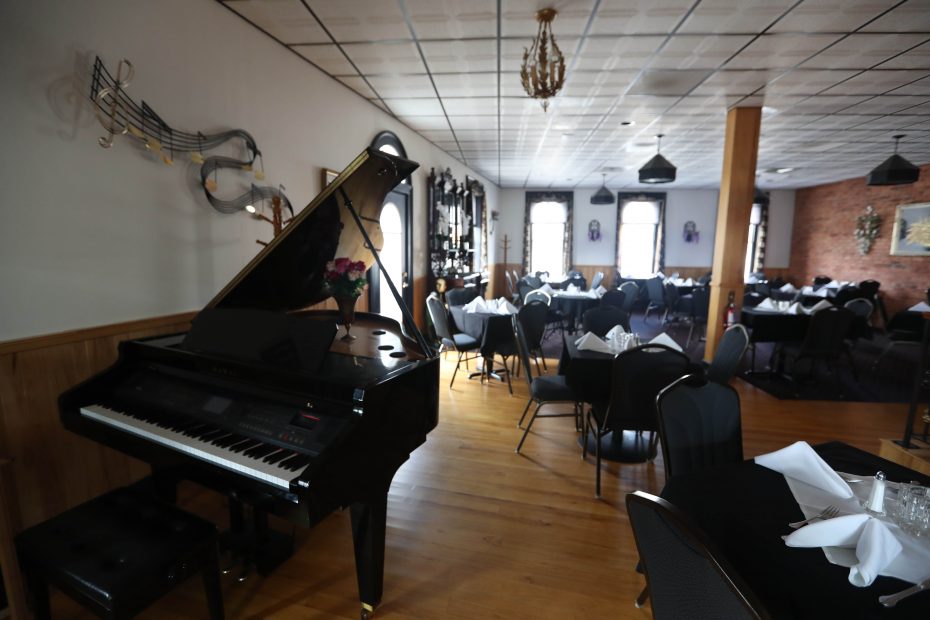 The Legacy’s more ambitious entrees weren’t as satisfying as the sandwiches I got to meet, and some of the appetizer cast. But The Legacy gives Springville a chance at a nice night out, and a grand piano looking for a reason to be heard.

Parking: lot in back.