Call it the meteorological version of "Buffalove."

For the first time today, Buffalo's National Weather Service radar scanned the atmosphere at a lower angle in an effort to better track stormy weather in Erie, Pa.

A software tweak allowed Buffalo's Doppler radar to begin scanning at an angle that's a fraction of a degree lower from where it had been set for the last 25 years.

By scanning at the lower angle, radar coverage at 2,000 feet in altitude can be increased by close to 50 percent, the weather service said in a report. That can provide more data to forecasters, including lake-effect snow development over Lake Erie. 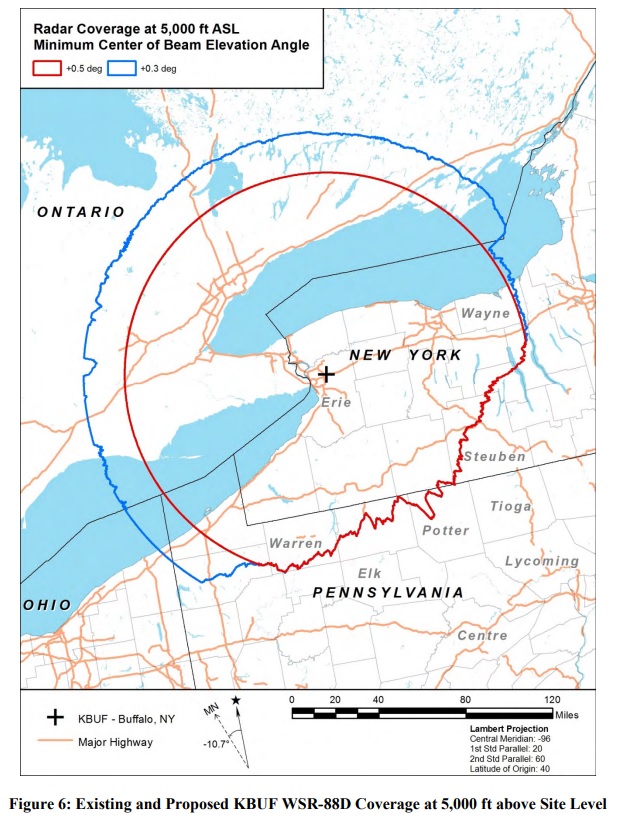 Radar coverage will be expanded because of a slight change to how Buffalo's National Weather Service radar station scans the atmosphere. (NWS)

"It will have minimal impacts for land areas of New York because it just gets blocked by terrain," said Dave Zaff, a meteorologist at the weather service in Buffalo.

The biggest effect will be in places like Erie, a city that's seen a lion's share of lake-effect snow over the last few winters.

The new radar angle being scanned from Buffalo will reduce the altitude of coverage over Erie from about 4,100 feet to 2,460 feet.

That's a big deal when you consider forecasters keep close eyes on the atmospheric layer closest to surface when tracking lake-effect snow.

It should also help the weather service office in Cleveland.

Forecasting snowfall in Erie would seem to be taking on an increasingly important role, by recent numbers.

National Weather Service data shows five of Erie, Pa.'s six highest seasonal snowfall totals have come since 2000, including last year when it appeared as though the city was within an inch of eclipsing Buffalo's all-time record of 199.4 inches set during the winter of 1976-77 – the winter of the "Blizzard of '77."

The weather service officially recorded Erie's snowfall for last winter at 166.3 inches. The mark was still plenty enough to create a new high seasonal snow mark for Erie. It broke the city's previous mark of 149.1 inches, set during the winter of 2000-01.