Chemistry student Laura Beth Hare thrust a metal garden trowel into the grassy backyard lawn of a Town of Tonawanda home last Friday, away from trees, awnings or anything else that could affect the way they're deposited from the air into the soil.

The University at Buffalo student carefully excavated a roughly 6-inch-wide by 6-inch-deep hole. Then, with a stainless steel table spoon, she scooped the rich brown soil into a pair of clear, cylindrical glass sample jars – each about the size of a coffee mug – until they were full.

Soil sampling like this has taken place at nearly 300 locations in all so far.

After the samples are tested in a lab, scientists hope to be able to tell what toxins from nearby Tonawanda Coke have tainted residents' yards.

“We’re trying to find out what percentage of what we find comes from Tonawanda Coke,” said Joseph Gardella, the UB chemistry professor leading the study.

The state Department of Environmental Conservation on Tuesday announced that Tonawanda Coke's operations have been safely shut down. The facility’s gas lines have been completely purged and all coke ovens are empty.

DEC and the EPA employees remain on-site to assess environmental conditions and investigate contamination at the site.

Finding out Tonawanda Coke’s historical impacts outside the facility can be obtained only by digging 6 inches deep in residents' backyards, Gardella said.

Soil 6 inches deep can best tell scientists about Tonawanda Coke's effects over time, depending on location, up through roughly the 1970s or 1980s. That's when scientists found there was sharp drop-off in levels of pollution thanks to the federal Clean Air Act and Clean Water Act.

Not only are more contaminants found in the deeper soils, but scientists can assure a more consistent profile of the history of Tonawanda Coke’s pollution.

“This study, the way it was ordered, was not about, ‘What are you being exposed to?’ ” Gardella said. “It’s, ‘What is the historical impact of Tonawanda Coke?’ ”

The labeled glass jars identify the source of the sample and instructions for what chemicals should be sampled at the laboratory.

Hare capped them with white, screw-on plastic covers and placed them in the bin. While Hare was doing that, fellow chemistry student Carolyn Gibbins took notes and pictures of the process and marked the location with a GPS device.

The soil sampling is typically taken in one spot per yard. And, the sampling process is the same at every site.

“We just want to be consistent,” said Katie Little, UB’s administrator of the Tonawanda Coke Soil Study project. “When you compare samples, you want to minimize the variables.” 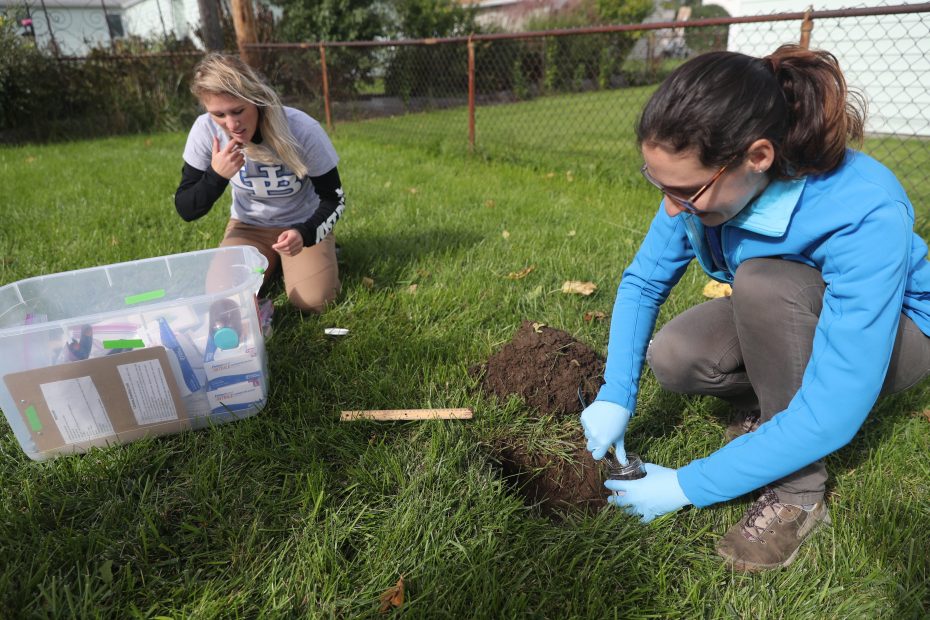 Hare also collected a backup sample and placed in a larger amber glass pharmacy jar. Gibbins affixed tape to the jar and labeled it with the date and location from where it was collected, then registered the entry into a recording laboratory book.

The first two samples will be shipped to the ALS Environmental laboratory in Rochester for analysis. The backup sample is kept in frozen storage at a University at Buffalo laboratory.

The crew continues to chip away at a list of homeowners who’ve responded to the informational fliers distributed over the summer in the neighborhoods affected by Tonawanda Coke.

Looking for a 'signature'

Using about a half-dozen samples collected Oct. 12 from Tonawanda Coke’s property – and a sample of its final coke product – researchers are confident they will be able to determine “a signature” that can differentiate a pollutant that originated from Tonawanda Coke from one spewed from any number of other plants. Then, Tonawanda Coke’s contribution as a source of the pollutants found in the soil samples can be apportioned accordingly.

Laboratory analysis linking contaminants back to Tonawanda Coke will take some time – likely into at least mid-2019, Gardella said.

The university researchers are sampling soils this fall in areas where initial screening found higher elevations of chemicals like PCBs, heavy metals and organic compounds related to benzene like polycyclic aromatic hydrocarbons, commonly known as PAHs.

As of Friday, 95 properties had been sampled under the second-phase of the study. Sampling is expected to continue into December. Researchers are still looking for more residents to participate.

The sampling is part of the second phase of the more than $700,000 Tonawanda Coke Soil Study ordered by U.S. District Judge William M. Skretny in his 2014 criminal sentencing of the company.

“The judge’s order was really to focus on Tonawanda Coke’s impact, not the overall environmental problem,” Gardella said.

For now, results of the first phase of the study – which tested some 170 chemicals, resulting in the generation of more than 2,000 maps – are known only by the University at Buffalo, the EPA and the state Department of Environmental Conservation.

Residents whose properties were tested in that initial round of screenings also have individualized results.

Generic mapped details of the screening are expected to be made available at a public meeting possibly by the end of the year, Gardella said.

Not everyone agrees with UB's methods for studying the soil.

Those with the Citizen Science Community Resources organization believe the locations and depths of soil samples don't jibe with Skretny’s order. The organization thinks sampling should be done in shallower soils in order to paint a picture of more recent pollution and its fallout in surrounding neighborhoods.

“We were afraid of missing stuff if we sampled at 2 inches,” Gardella said. “Plus, we had to look at the historical effects over time.”

Jackie James-Creedon, founder and executive director of organization, submitted a proposed soil sampling study that was originally funded by Skretny’s 2014 order. James-Creedon later turned over the administration of the soil study to UB.

Her organization now says UB officials are reneging on obligations to her organization. It also questions how UB is conducting the scope of the soil study.

“UB is behind in paying us," Citizen Science Community Resources said in a statement. "To date they owe us approximately $25,000. Without this funding, our community organization is unable to carry out the mandates of this project to help the residents that have been impacted by Tonawanda Coke’s environmental crimes.”

“Additionally, it is our view that the project has veered off track from what Judge Skretny ordered and what he intended for our community," the statement read. "Unfortunately, the community ends up on the short end of the stick.”

Gardella said UB is attempting to run an open-ended, objective study free of outside influence.

"CSCR has been paid for the work that they have documented as related to the soil study project as described in the contract," the university said. "Invoices that were submitted by CSCR containing non-project expenses cannot be paid under the contract. The research foundation has the fiscal responsibility to ensure that only documented project related expenses, directly related to the project’s scope of work, are reimbursed with the Tonawanda Coke settlement funds."