He lives in a $400,000 house far from his company's smokestacks, which for years rained benzene over working-class neighborhoods. His CEO grandfather brought him into the coke-making business at a young age and prepped him to take over some day.

The grandfather gave the young Paul A. Saffrin a great opportunity soon after he graduated from college: travel abroad to find ways to help the company.

"He said go down to South America, learn the language, look for business opportunities, chase long-legged ladies and don't get in trouble," Saffrin said when deposed for a lawsuit in the summer of 2017.

After two years, James D. Crane summoned his grandson home. The young businessman had drummed up no new business during his time away.

Almost 20 years later, Saffrin is the CEO who closed the doors of his late grandfather's cash-starved company, Tonawanda Coke, and filed for bankruptcy. The decision to close ends its role as one of the Buffalo region's major polluters and gives a measure of relief to residents who lived under its discharge.

“When Mr. Saffrin took over a few years ago, he promised us things would be different," said Jackie James-Creedon of  the Citizen Science Community Action Organization, one of the groups that took on Tonawanda Coke over its pollution. "Ultimately, he wound up walking in Mr. Crane’s footsteps.”

Pictures of Saffrin show him with a goatee and ink-black hair. He keeps a low profile. When the FBI raided the plant in 2009, he refused to speak with the agents. He was a member of the company's board of directors at the time.

He seldom gives interviews and never responded to The Buffalo News' requests to talk to him for this article. He doesn't like the coverage his company has received. The media, he said during the deposition, has "villainized" Tonawanda Coke.

"I can honestly tell you, the man is bothered that the plant is shutting down," said Doug Castile of Youngstown, the maintenance foreman who is among the about 100 employees losing their jobs as the holidays approach. "You can see it in his face."

Castile says Saffrin carries a picture in a pocket of his "greens," the coveralls he wears as he and other workers go through the laborious process of shutting down Tonawanda Coke. The picture shows an 8-year-old Saffrin with his grandfather, Castile said. They are together at the factory more than 30 years ago.

The deposition was conducted over two days as part of a class-action lawsuit alleging Tonawanda Coke and its overseers contaminated the community. As he's questioned, Saffrin is at different turns talkative and terse.

"Could inhaling substances such as benzene, coke oven gas and the particulate matter associated with coke oven gas ... be harmful to your health?" he was asked.

"Anything could be harmful to your health," he answered.

He said he agreed with an employee: The criminal trial against Tonawanda Coke in 2013 – in which a jury convicted the company of environmental crimes – was, in part, a political attack inspired by disgruntled former workers.

Through much prodding, Saffrin insisted he and his family reside in Orchard Park because it's easier for his wife to hop on the Thruway and return to her hometown of Erie, Pa., not because he doesn't want them residing under Tonawanda Coke's cloud. 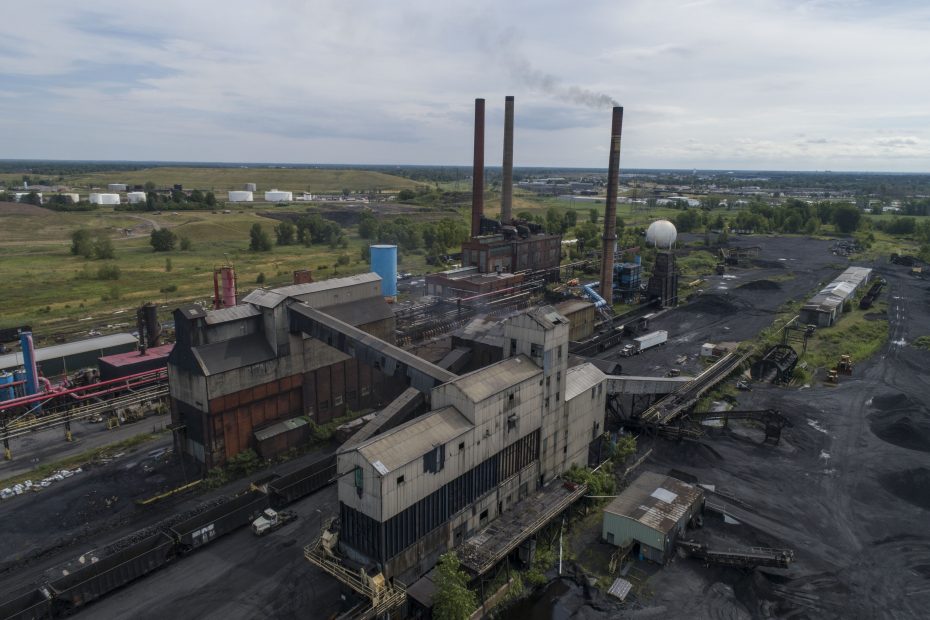 "Are you generally aware of the Tonawanda Community Air Quality Study that was released in 2009?" Saffrin was asked.

"Do you have any relatives who live within that study area?" he was asked.

"Not that I know of," he answered.

"Do you have any friends who live within that study area?"

"I don't have very many friends, so I don't think so."

The transcript offers hard-to-find details about Paul Andrew Saffrin, 41, of Graystone Lane in Orchard Park.  He was born in Skokie, Ill., and graduated from Bradley University, in nearby Peoria, with degrees in psychology and international marketing. When he was very young he would see his grandfather once a year, around Christmas. As a teenager he would be sent in the summer to work on Crane's farm in Batavia.

While in South America he lived in Santa Cruz, Bolivia. His grandfather owned cattle in Bolivia and an idle coke factory in Colombia called Bogata Coque. At that point, the young Saffrin started calling his grandfather "boss."

He came home from Bolivia because his grandfather told him to.

"Why did he tell you to come home?"

As his career with his grandfather's company progressed, through jobs at Erie Coke in Erie, Pa., and then Tonawanda Coke, that interplay would be repeated. When his grandfather told him to do something, Saffrin did it. He didn't ask why.

Why did Crane tell him to transfer from Erie to Tonawanda, he was asked.

Sometime after the raid in 2009, J.D. Crane asked Saffrin to become the president of Tonawanda Coke.

"Why did he make you the president at that time?"

In 2013, his grandfather asked him to be the face of the company at the criminal trial. Was Saffrin told why?

Until his death in 2014, when Crane held the title of chairman, Crane remained the person with ultimate authority over Tonawanda Coke, Saffrin said.

Damon Piatek calls Saffrin a really nice guy, a family man who he met through the Kenmore-Tonawanda Chamber of Commerce. They have lunch once in a while and have talked about traveling with their families to Disney World, Piatek says.

Saffrin, like his grandfather, gives money to politicians, usually those who are pro-business and lean right. He gave $9,500 to Piatek over his two election campaigns: an unsuccessful run for Tonawanda town supervisor in 2015 and a losing race for a town board seat two years later, according to Piatek's reports to the state Board of Elections. The money came from Tonawanda Coke and its corporate sibling, Vanocur Refractories.

"He wasn't looking for anything in return," Piatek said of Saffrin.

No local or state candidate has reaped more campaign cash from Tonawanda Coke in recent years than Stefan Mychajliw, the Republican who serves as Erie County comptroller. Thirty-four cents of every dollar that Tonawanda Coke gave to local and state political causes this decade went to the “Taxpayers for Stefan” fund, state records show, even though a county comptroller wields little power to help the company with its regulatory issues.

“Right now, I think Paul is more concerned about the people who lost jobs than he is about himself,” Mychajliw said. “It’s my understanding that he was working very hard, right up until the end, to keep the plant open and keep his employees working. I think a lot of people do not understand that Paul inherited a very difficult situation. He did his best to keep up with the alphabet soup of regulators in a way that would allow the plant to keep operating at a profit.”

Though Mychajliw does not run for re-election this year, Vanocur Refractories gave him $5,000 in May. The sum arrived less than six months before Tonawanda Coke filed for bankruptcy this week, jeopardizing its final court-mandated $2 million community-service payment. Mychajliw does not intend to return the $5,000 or donate it to those harmed by his friend's company.

Said Mychajliw: “It is illogical and inappropriate to assume that a campaign donation is anything more than the donor telling me that I’m doing a good job.”

While some people see Saffrin as having been dealt a bad hand with Tonawanda Coke, he's responsible for a similar factory – Erie Coke in Erie, Pa.

Erie Coke paid more than $4.8 million in fines related to federal environmental charges between 2010 and 2017, according to Good Jobs First, an economic development policy group that tracks companies with records of environmental and safety violations.

The federal Environmental Protection Agency sued Erie Coke in 2016, saying the company had failed to prevent emissions of the cancer-causing chemical benzene. In April 2017, officials of the EPA and U.S. Justice Department confirmed a court-authorized search was conducted at the company’s offices in Erie as part of an ongoing investigation.

And on Sept. 7 of this year, Pennsylvania’s Department of Environmental Protection sent Erie Coke a letter notifying the company of two air pollution violations from the previous month, according to the agency's website. Pennsylvania officials said the company has been cited for violating state environmental regulations a dozen times over the past two years.

Saffrin's practice of donating money to outside causes has irritated the community groups who urged regulators to crack down on the company's pollution.

In 2016, a charitable foundation headed by Saffrin donated $1 million to Daemen College, where he is a trustee, and $1 million to the Explore & More Children's Museum project at Canalside, two years after Tonawanda Coke was fined $12.5 million for environmental crimes and a manager was sent to prison.

“I thought it was appalling," said Rebecca Newberry, executive director of the Clean Air Coalition of Western New York. "After all those years of violations at the plant, he chose to give millions of dollars to a museum and a college, so he could have his name put up on a building, rather than spending that money to improve the plant.”

At the time of the donations, Saffrin told The News that the donations had no connection to his position at Tonawanda Coke.

“Those of us fortunate enough to call the City of Good Neighbors our home understand the importance of being good neighbors,” he said at the time.

When deposed in the class-action lawsuit the following year, Saffrin said the company had not always done a good job protecting its public image, so it was taking a "more active role and more direction in public perception."

He was asked if Tonawanda Coke had always been a good neighbor.

"Some would say no."

"What would you say?"

The lawyer followed up. Did Tonawanda Coke always "achieve its very best" in terms of being a good neighbor?

"Because we were – we were found guilty in a criminal trial."

But when asked whether he believed Tonawanda Coke did violate the environmental rules it was found guilty of, Saffrin balked.