Troy Vincent is quick with answers to almost anything. It’s a skill that served him nicely during his 15 years as an NFL defensive back, and during his tenure as president of the players' union, and still today as an NFL executive.

Ask him a question that’s timely here in Buffalo, where the Bills are preparing for a Monday night game against the New England Patriots, and he’ll deliver a solid soundbite. It goes like this: What do you remember of the Bills-Pats rivalry from your day? (Vincent was a Bill in 2004 and 2005.)

“We never beat them,” he said. This is accurate: The reigning Super Bowl champions swept Buffalo in those two years, much as Bills fans had hoped to repeat the team’s 31-0 season-opening blowout of the Patriots from 2003.

“We were after the champ,” Vincent said, “and the champ wasn’t having it.”

That eloquence-on-demand is a skill too that helps him when he digs deeper than football, beyond games and rules and rivalries, and reaches into the most painful recesses of his past. When Vincent puts himself in that place, the words still flow fast, but not as smooth. When you’re talking about your mother’s boyfriend beating her, or your child dealing with sexual assault, or the need for “courageous men to confront other men” to stop those horrors, you’re going to hug your syllables. You’re going to let silence speak.

Even if you’ve told the story before. 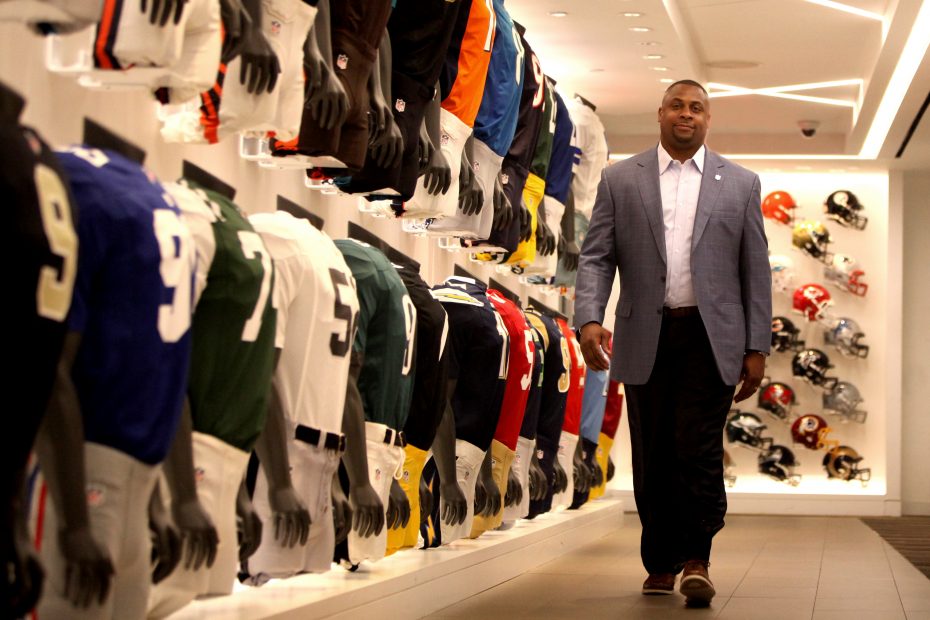 Troy Vincent is speaking at an Oct. 23 luncheon for Domestic Violence Awareness Month at the YWCA of the Niagara Frontier in Lockport. (Photo courtesy of Troy Vincent)

Vincent, who is 48, has long been regarded as one of his sport’s good guys. As an athlete, Vincent was stellar in the secondary and could one day land in Canton. He started with Miami, played the bulk of it in Philadelphia, came to Buffalo in 2004-2005, then after a brief time with the Bills at the start of the 2006 season, headed to Washington, where he wrapped his career.

In 2002, he won the league’s Walter Payton NFL Man of the Year Award, a prestigious honor given to a player for his combination of community work and on-field performance. Vincent is a longtime advocate for survivors of domestic abuse and sexual assault, an issue that is rooted in his own experience. That message is bringing him back to Western New York this week when he speaks at an Oct. 23 Domestic Abuse Awareness Month luncheon at Lockport’s YWCA of the Niagara Frontier.

When Vincent makes these presentations, he said, the rooms are often “full of women. The women have been doing their part. We’ve got to fill the room with courageous men. Men that are going to stand up for women and girls and our young children.”

Vincent is accustomed to challenging men to step up. He served as an NFL Players Association official for most of his career and the union’s president from 2004 to 2008. In his own teams’ locker rooms, Vincent stood out as a thoughtful, measured leader who listened first, and spoke second.

“He was slow to speak, but you knew he was listening,” said former Bills linebacker Takeo Spikes, who was in the seventh year of his NFL career when Vincent came to Buffalo. “After he would make his assessment, that’s when you would usually hear Troy talked. When he talked, people would stop and listen.”

They do still. Today, as the NFL’s executive vice president of football operations, he is one of the most powerful figures in the sport. Vincent’s purview spans rules of the game to helping players develop themselves for careers after the game.

He has the soundbites for this, too. Ask how the league is handling concerns over penalties for roughing the quarterback, he’ll matter-of-factly tell you that three points combine to take care of the issue: “Officiating mechanics,” to use his term, plus coaching and player adjustments.

“When those three things combine,” he said, “we see penalty reduction.”

Rounding up on-field officials, coaches and players across the league to cut down helmet hits and cheap shots isn’t easy, but it’s infinitely simpler than solving the problem that Vincent has defined as his purpose.

“My purpose is to do good,” he said. “What are we doing for young ladies and young women? ...

“How do we made a difference in society?”

In December 2014, Vincent appeared with executives from the other three major sports leagues in front of the U.S. Senate Committee on Commerce, Science, and Transportation. In the wake of multiple domestic violence issues – the NFL’s mishandling of Baltimore Ravens running back Ray Rice’s arrest for assault of his fiancee is one example – the senators were calling the leagues to task.

In his opening statement, Vincent made clear the NFL needed to – and would – do better. “We have not kept our standards current with our own values,” he acknowledged. Then he continued: “Mr. Chairman and committee, when I consider these issues, I bring a perspective far beyond an NFL executive. Domestic violence was a way of life in my home growing up. My brother and I watched helplessly numerous times as my mother was beaten, and knocked unconscious, as we dialed 911. We saw how she struggled to seek help and find the courage to say, ‘No more.’ ”

Vincent and his younger brother, Sam, shared one room in their family’s Trenton, N.J., apartment. Their mother, Alma, had the other. Vincent remembers harrowing details of his mother’s boyfriend beating her; these details he shares in the presentations like the one he’ll make in Lockport.

“I hold back absolutely nothing, because that’s part of the connection,” he said. “Someone will say, ‘What does he know about it? Why does he care?’ Let me tell you why I care.”

Vincent tells the story in questions, questions that reach back to when he was just 7 years old.

“I’ll walk you through it,” he said. “Let me tell you how many times I’ve been to the emergency room. Has anyone ever fed their mom for nine months out of a straw because every bone in her jaw was broken? Has anybody in the room seen a full facial cast with nothing but eyes cut out, and nose so they can breathe, and a hole around the mouth? Has anyone visited the emergency room and you don’t recognize your mother because she looks like she’s been in a car wreck?”

That smooth soundbite voice is gone. Talking Bills-Patriots is easy. Talking roughing-the-passer penalties is serious stuff – there are health and safety implications, to be sure – but Vincent can do it with the verbal efficiency of an executive.

But talking about this? His mother’s pain? His and his brother’s fear? That sense of entrapment? The anguish is still clear in Vincent’s voice. At the Senate hearing, his voice briefly cracked and his eyes moistened. On the phone today from New York, where he is based with the NFL, Vincent slows his words when he starts talking about his experiences. Every time he does one of these interviews, he asks his mother’s permission. He speaks with precision, and pauses often, perhaps collecting his thoughts, and certainly leaving airspace for the message to resonate.

“Has anybody had to go talk to your wife because your son or daughter has been violated?” he said. “Those are real. That is real.”

Nine years ago, Desiré Vincent Levy was sitting at her desk at college. She was 21, had been working through a difficult part of her past in counseling, and was ready to share with her parents. She dialed home. Her mother, Troy’s wife Tommi Vincent, answered. Dad wasn’t wasn’t around, so mother and daughter spoke.

“I was nervous as hell,” said Vincent Levy, who is married to former Detroit Lions linebacker DeAndre Levy. “I just called her and started talking.” 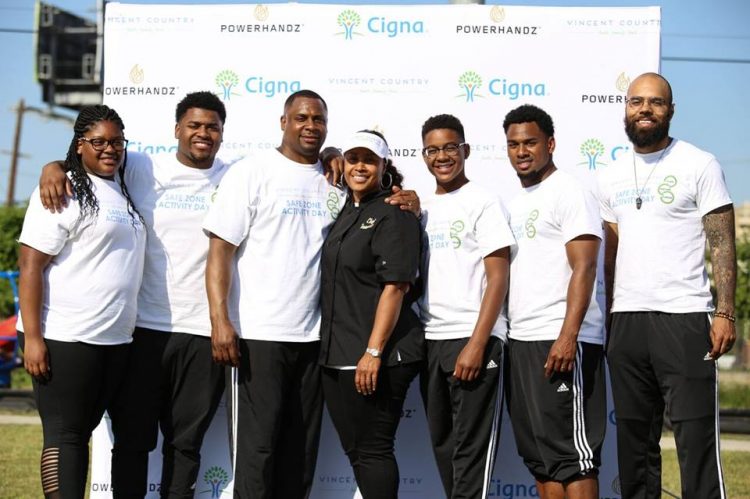 Desiré was calling to reveal to her parents that, as a child a decade earlier, she was sexually assaulted. She had told no one until her counselor — and now her mom. Tommi Vincent shared their daughter’s revelation with Troy, and as they worked through it, the Vincents came together as a family with a shared mission.

Troy, who was already speaking about domestic violence, also started raising awareness about sexual assault. His eldest son, Troy Jr., began educating young men and boys on the issue. Desiré and her husband have worked to raise awareness in Detroit of sexual assault through a public art project and by helping raise money for the processing of more than 11,000 unopened rape kits.

“Because my children have the strength and the courage about assisting the next potential victim,” Vincent said, “it’s become a family advocacy.”

They’re looking for more men to emerge and help, and not just by preventing the bad ones from doing bad things. It’s by empowering the good guys to be even better — and to openly stand up for what’s right.

Vincent has spent his adulthood trying to build good men into better ones. He gets angry when people ascribe sexual comments to “locker room talk.” In his experience, the locker room is a place where men can learn and lead; not a place where men have an excuse to demean women.

Back during his time with the Bills, Vincent was sitting in the steam room at the team’s training complex with a group of other players. One of them was Spikes, the star linebacker who is seven years younger than Vincent. Spikes had a swimsuit magazine in his hand and was paging through it, holding court with the guys, who were making comments like, “This is my wife,” and, “This is my girl.”

Vincent sat quietly till the steam session was finished, then followed Spikes back into the locker room. He quietly pulled Spikes aside, when nobody else could hear them, and by Spikes’ recollection, said, “You need to lock in, man.”

At first, Spikes thought Vincent was talking about football. But Vincent assured Spikes he had no concerns about his dedication to the game. Vincent was thinking back to an earlier conversation in which Spikes shared that he hoped to be a family man.

“That’s not how you get there,” Vincent recalls telling Spikes. “You were rallying the troops, flipping through the pages, with things that were demeaning towards women. It positioned them as products, as symbols.”

Don’t indulge in things that bring you no substance, Vincent advised. “If you want what you just shared with me a month ago,” Vincent said, “we’ve got to change the way we think. We’ve got to change our actions.”

Spikes did change. He set down the swimsuit magazine that day and never picked it up again. “That did the world (for me), that helped me out a lot,” said Spikes, who recalls the words Vincent used: “What you put in is exactly what you’re going to get out.”

It’s a soundbite, sure. One with a deep and permanent impact, and one that reminds – and perhaps even empowers – a man to step up.