Jim Kubiak will be analyzing the play of the Bills quarterbacks throughout the season for BNBlitz.com. Kubiak is the all-time leading passer at Navy, has played in the NFL, NFL Europe and the Arena Football League, and been a coach and executive in the AFL. He spent eight years as the radio analyst for the University at Buffalo and runs the Western New York Quarterback Academy to help develop the next generation of quarterbacks.

Quarterbacks are graded each quarter using a “Doing Your Job” grading system for every play. The Bills' QB performance grade against the Colts was 83 percent.

All things considered, Derek Anderson shed some light on a dark quarterback situation for the Buffalo Bills.

Anderson was on vacation two weeks ago and out of football before receiving the call from the Bills. He did not attend a training camp, and although he has had experience working with Brian Daboll years ago in Cleveland, Anderson had no current knowledge of the Bills' offensive system. These considerations did not deter the organization from putting Anderson on the field as he made his fifth NFL start since 2011.

The Bills were hopeful that starting Anderson would provide consistent leadership and efficiency to an offense that has often looked like a mad scramble of hiccups and missteps. 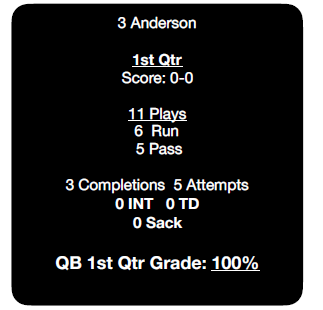 Anderson did provide stability and efficiency as he went 11-for-14 in the first half for 90 yards. His only mistake of the half came on his 23rd play, as he forced a dig route to his former Carolina Panthers teammate Kelvin Benjamin, resulting in his first interception.

Anderson up to this point had done a wonderful job of taking what the defense was giving. Daboll had put together a smart package of plays in which Anderson could get rid of the football on time and in rhythm.

Anderson, to his credit, managed the game, checking the football down to his running backs when his reads made it necessary. This was a relief to see, and this intelligent patience helped the Buffalo offense move the ball down to the field on five drives in the first half.

The turnover differential is the single most important statistic in any NFL game. So as well as Anderson played for the first three quarters was as badly as he played in the final quarter. Anderson went 5-for-11 and threw two interceptions while fumbling once. His three turnovers in the fourth quarter were the result of trying to do too much. 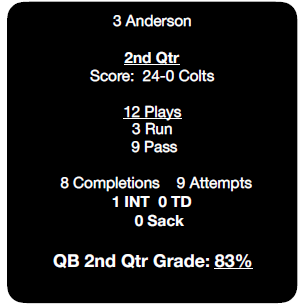 In a desperate attempt to generate points, he was no longer being patient. This is a common mistake among quarterbacks, as they begin to press, trying to make big plays rather than making the plays that are there to be made. The score heading into the fourth quarter was 24-5, not out of the realm of possibility for a team such as the Patriots, and somewhat reasonable for a quarterback that had not thrown a football since entering the NFC wild card game against the New Orleans Saints on Jan. 7.

The turnovers simply added insult to injury, as the Colts added 13 more points to the lopsided score in the final quarter.

There isn’t a team in football that could overcome five turnovers, and there isn’t a team in football with the self-inflicted quarterback situation of the Bills. Anderson graded higher than Allen and Peterman did in four of their six regular season games this year of combined playtime. That is a telling tale in a season that has been riddled with poor, inconsistent quarterback play.

Anderson’s grades per quarter against the Colts were 100 percent, 83 percent, 88 percent, and 55 percent, respectively. His presence and decisive decisions for all but three of his 55 plays helped the Buffalo offense look respectable. Those three interceptions, as well as two fumbles, however, were difference makers. 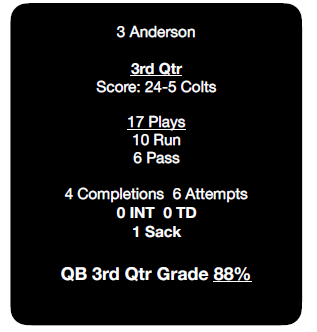 As the Bills move forward and begin to prepare for the Patriots on Monday night, there needs to be some self-reflection. Buffalo had the opportunity to keep Tyrod Taylor, a player that in three seasons for the Bills had thrown 51 touchdowns and 16 interceptions.

Comparatively the Bills’ quarterbacks this season have thrown 3 touchdowns and 12 interceptions in just seven games. The Bills also had the opportunity to retain and start AJ McCarron, who had led Buffalo to a 24-point comeback win versus the Chicago Bears in the final week of the preseason. It appears that dismissing both of these opportunities has sent the organization into a tailspin, whereby two young and talented players, Allen and Peterman, have been thrust into action before they were ready to play at such a high level.

Whether you are for or against these decisions, the facts, the production, the injuries and the overall consequences demonstrate that thrusting young, inexperienced players into the fire isn’t always the best way to develop them. 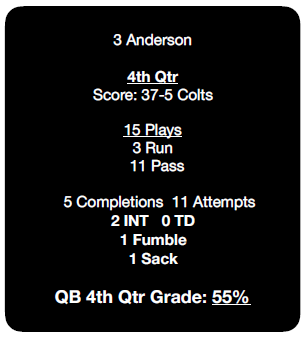 The analysis of Anderson’s performance this week, 83 percent with four turnovers against the Colts, has revealed a tragic miscalculation. Anderson, a guy off the street, was able to perform better because of his “experience” than Allen and Peterman have collectively performed this season.

Forget about arm strength and running ability, because those quarterback characteristics do not mean as much to a players’ success as his operational skills and accuracy. This is the unsettling reality the Bills must now face going forward, because that is the unfortunate position they have placed themselves in.

Anderson can and will play better with more practice. And his presence, as the Bills’ brass had hoped, will certainly provide Allen with valuable NFL mentorship.

But is it too little, too late?