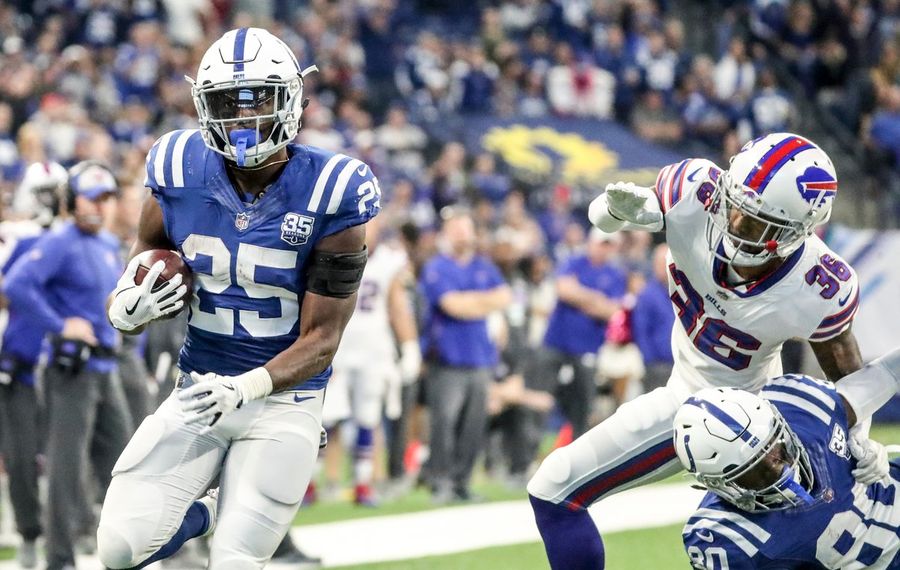 This isn’t the reason the Buffalo Bills lost. Despite LeSean McCoy contributing just 1 yard, the Bills finished with 135 as a team. Chris Ivory ran hard in gaining 81 yards on 16 carries, while Marcus Murphy showed good burst in gaining 53 yards on just four carries. The team’s average of 6.1 yards per rush was a full two yards better than their team average of 3.9. Ivory and Murphy have shown they can give the Bills some production, which will be needed if McCoy, who is in the concussion protocol, misses an extended amount of time.

Derek Anderson looked exactly how you feared he would. The 35-year-old starting in place of injured rookie Josh Allen went 20 of 31 for 175 yards and four total turnovers (three interceptions, one lost fumble). Until Allen gets healthy and shows something, the Bills have by far the worst quarterback situation in the NFL. Charles Clay, the $9 million tight end, lost a fumble inside the red zone with the score 6-0 Colts. Kelvin Benjamin did have season highs with four catches for 71 yards.

A massive step backward here for a unit that had been playing well. There was no contain on outside runs. The defensive line lost the battle of the line of scrimmage. It got off to a promising start when Star Lotulelei stopped Colts quarterback Andrew Luck’s sneak attempt for no gain on a third-and-1 play on the opening drive, but quickly went downhill from there. Linebacker Matt Milano missed some tackles and struggled to get off blocks at times. Rookies Tremaine Edmunds and Taron Johnson shared the team lead with seven tackles each.

The pass rush was nonexistent. Luck was not sacked and only hit twice. The Bills gave up four passing touchdowns, including an inexcusable 29-yarder to running back Marlon Mack, who was wide open and free to run down the right sideline. The yardage allowed (156) was fine, but the Bills couldn’t get the stops they needed. It’s never good when a cornerback leads a defense in tackles, because it usually means he’s allowing catches in front of him. That was true of Johnson at times Sunday. The Bills had just one pass defensed, so they weren’t even getting close to making plays on the ball.

Punter Corey Bojorquez had a good day, placing three of his four punts inside the Colts’ 20-yard line and averaging 46.3 net yards. Kicker Stephen Hauschka gave the offense its only points with a 34-yard field goal. Both of Hauschka’s kickoffs went for touchbacks. The return units didn’t do much of anything, with Marcus Murphy and Micah Hyde both making a fair catch on a punt return and Murphy being held to 48 yards on three kick returns.

Frustration was evident on the field and in the postgame locker room. Both Jerry Hughes and Kelvin Benjamin took unsportsmanlike conduct penalties that showed a lack of discipline. Offensive coordinator Brian Daboll moved from the coaches’ booth to the field, but the results didn’t get much better. The offense has been horrible at the start of games all season, putting immense pressure on the defense, which buckled Sunday. The losing locker room had more of an edge to it than it has all season. Sean McDermott trying to ice Colts kicker Adam Vinatieri on a field-goal attempt before halftime was funny. After 23 years, I don’t think that’s going to get in Vinatieri’s head.

South Florida product Marlon Mack will be a hot fantasy commodity after rushing 19 times for 126 yards and one touchdown. The Bills made him look like a franchise back. Mack had a 23-yard run, while Jordan Wilkins and Nyheim Hines each had 18-yarders. Those two combined for 93 yards on just 11 carries, part of a team total of 220. The only thing that went wrong on the ground for Indianapolis was backup quarterback Jacoby Brissett losing 4 yards on four kneeldowns to end the game.

Luck’s shoulder looks just fine. The Colts’ franchise quarterback didn’t need to do a ton through the air, but made the most of his opportunities in going 17 of 23 for 156 yards and four touchdowns, a passer rating of 131.5. T.Y. Hilton returned from a two-game absence to make four catches for 25 yards, two of which went for touchdowns. Chester Rogers had a 29-yard catch that matched Mack’s touchdown reception as the longest play of the day for the Colts.

Linebacker Darius Leonard was everywhere, finishing with 17 tackles and a fumble recovery. Playing with a big lead, the Colts looked like they were fine with giving up some yardage on the ground, which keeps the clock running. Defensive lineman Jabaal Sheard had two tackles for loss and fellow linemen Hassan Ridgeway and Margus Hunt each had a tackle for loss.

Rookie Kemoko Turay got a strip sack that was recovered by second-year cornerback Quincy Wilson to set up a touchdown. Veteran safety Mike Mitchell, who was signed before Week 6, forced a fumble in the first half that Leonard recovered and had one interception, two passes defensed and seven tackles. Defensive backs Kenny Moore II and Corey Moore also had interceptions. The Colts hit Anderson four times, sacking him twice.

Plays that Shaped the Game: Clay fumble started Bills on road to ruin

It was strange to see veteran kicker Adam Vinatieri miss a pair of extra points. Punter Rigoberto Sanchez is a beast. He averaged 47.0 net yards on four punts, putting two of them inside the 20-yard line. The return game didn’t get a chance to do anything, as punt returner Chester Rogers made four fair catches and both the Bills’ kickoffs went for touchbacks. The coverage units were solid, particularly on kicks. Zach Pascal made two special-teams tackles.

Old friend Frank Reich could do no wrong against his former team. "They came out with some different schemes that we weren't necessarily prepared for," Alexander said. That's a credit to Reich's game plan. The only miscue of the game is when a snap by center Ryan Kelly went through the hands of Luck into the end zone, resulting in a safety. The Colts showed what the Bills have so often lacked this year – progress.