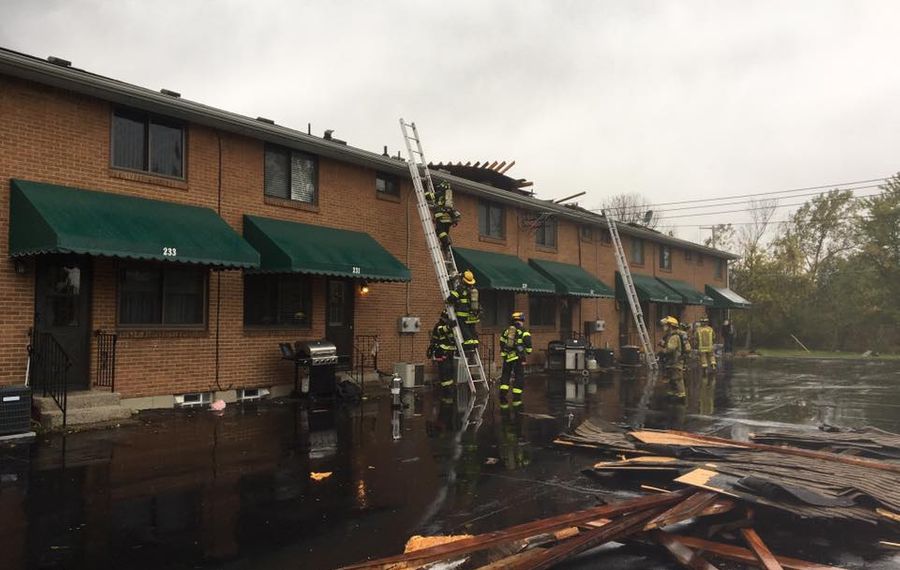 A tornado briefly touched down in West Seneca Saturday afternoon, uprooting a small tree, breaking windows, blowing off shutters, downing tree limbs — and ripping off the roof of a condominium complex.

The weather event happened at around 2 p.m. on Greenmeadow Drive, off of Orchard Park Road, and was later classified by the National Weather Service as the weakest category of tornado, with winds between 65 and 75 mph.

No injuries were reported.

“It was actually a very weak one — minimal strength for a tornado,” said Aaron Reynolds, a meteorologist with the National Weather Service in Buffalo. “It touched down very briefly and it was over.”

It started with a thunderstorm off of Lake Erie that produced a brief waterspout over the Small Boat Harbor, according to a report from the weather service. The storm weakened as it moved inland over Lackawanna and caused no damage along its path until reaching the Town of West Seneca, the weather service reported.

That's when a Greenmeadow Drive resident told police she saw a funnel cloud touch down in the area of 211 Greenmeadow, where it uprooted a small tree, according to West Seneca Police Lt. David Szmania.

The funnel then continued east before striking a condominium complex, located between 221 and 235 Greenmeadow, where “it tore a substantial portion of the roof off the building,” Szmania said in a statement.

“It took most of the roof off the apartment complex,” West Seneca Police Lt. John Urbanski said Saturday evening. “The trestles are visible.”

The West Seneca building inspector responded to the scene and deemed the living space of the building habitable, but arrangements were being made for emergency enclosure of the condo, police said.

Debris from the roof damaged a garage adjacent to the condominium, police said.

The roof on a single-family house next door also was lifted and bowed by the funnel cloud, but the damage wasn’t as extensive, Urbanski said.

National Weather Service staff surveyed the damage at the scene.

"We did a storm survey on it and confirmed it was a tornado," Reynolds said.

The swath of the damage was about 75 yards wide and 280 yards long, according to the weather service.

Besides the roof damage, the National Weather Service noted damage to the building's facade, broken windows and missing shutters, as well as multiple limbs broken off a nearby hardwood tree.

Two witnesses at the scene confirmed seeing swirling debris moving in a path consistent with the damage, the weather service reported.