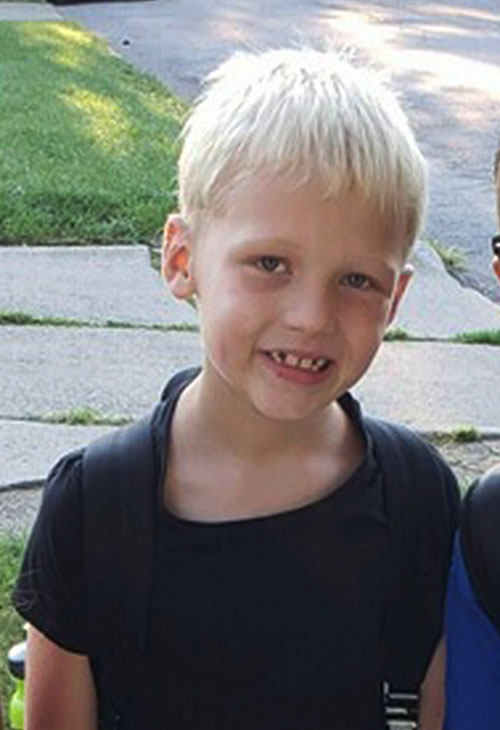 Seth Creenan, 8, was a third-grader at Glendale Elementary School.

Tracy Reeves ran down Sunset Terrace in the Town of Tonawanda Thursday night and saw black smoke pouring out of her neighbor’s house. Firefighters were breaking windows.

She saw two of the children who lived there.

As the fire spread and flames shot out of the house and smoke billowed out of both sides, Reeves asked the firefighters and police at the scene about the boy, a third-grader at Glendale Elementary School who was dear friends with her own children.

“The house was totally engulfed,” she said.

Town police confirmed Friday morning that one person died in the ferocious fire that consumed the house at 116 Sunset Terrace.

Neighbors identified the little boy as the victim.

Cathy Osika, another Sunset Terrace resident, described Seth as a "cute, blond kid" who loved skating up and down the street on his new roller blades. Her granddaughter often played with Seth, she said.

Seth's family released a statement that was provided to The Buffalo News by his aunt, Lisa Jo Schaeffer:

"We are utterly devastated at the loss of our beloved eight year old son and brother Seth Creenan as a result of a fire that occurred last night, October 18," the family's statement began.

"This has been a devastating and life-changing event for our whole family. Seth was a beautiful caring boy who will be greatly missed — our entire family is in shock by this tragedy."

"We want to express our sincere gratitude for all the love and prayers that we have received and continue to receive."

"We also wish to thank the community and the fire and police services who have assisted us in this, our moment of need. Lastly, during this difficult time we would ask for privacy and continued prayers as we grieve our loss."

"At a future date we will provide information on Seth’s funeral arrangements," the family's statement said.

Sweet Home Schools Superintendent Anthony J. Day posted a letter to parents on the district website alerting them to the sad news.

"It is with profound sadness that I write this letter to let you know that one of our Glendale Elementary students was lost in a house fire yesterday – October 18th," Day wrote. "Our sincere condolences and thoughts go out to the family and friends of our student. During this time as the school community processes the tragic news and copes with grief, the school district will offer counseling and bereavement support services to all of our students and staff at Glendale."

Standing in front of the badly burned house Friday morning, Brighton Volunteer Fire Chief Andrew Hallnan described a frantic effort by firefighters to make their way into the burning house to save the child.

Firefighters were dispatched at 10:47 p.m. for the report of smoke coming from the house with the possibility of people still inside, Hallnan said. When firefighters arrived, there was heavy smoke throughout the home.

Firefighters tried to get inside but were pushed back by heat and flames, Hallnan said.

"Eventually, about a minute into it, the house flashed over, became 100 percent fully involved," he said.

In their initial search, firefighters were not able to locate anyone inside, he said.

The Medical Examiner's Office was expected to perform an autopsy and coordinate with Town of Tonawanda Police detectives, as well as town and Erie County fire investigators.

The house is owned by Arthur C. and Lucille J. Schaeffer, but they don't live at the address, according to Erie County property records.

The Red Cross was called to help the parents and two other children, who are 11 and 15, find a temporary home. Schaeffer has set up a GoFundMe account.

Tracy Reeves said Seth spent a lot of time at her house and playing with her son, Mason, and daughter Ava.

Reeves said her son became close friends with Seth in the spring. Seth learned how to swim this summer in the family’s pool.

“He loved life. He was just happy with the simple things,” Reeves said.

Reeves said Seth’s older sister said the fire may have started in a toaster. Authorities did not say Friday how the fire began.

“He was like another child for us,” Reeves said of Seth, noting that he would often eat meals with her family.

She said Seth and Mason were “inseparable.” Seth was over at the Reeves’ home Thursday afternoon until about 4:15 p.m., when the family had to go out. The kids played at another neighbor’s house later that night. She saw Seth getting walked home by another neighborhood kid around 8 p.m.

Reeves said Seth always had a positive attitude and was well-liked.